Chevrolet recently joined the 2016 New York Auto Show to unveil the refreshed version of the Sonic. Slated as a 2017 model, the subcompact car which still comes in both sedan and hatchback forms now has a bigger, more aggressive fascia with new tech features and a slight bump in safety.

Starting off from the outside, one can notice its sleeker-looking headlights and slimmer grille which features a bigger air intake and stylish bumper with fog lamps. To us, designers did a good job in retouching the Sonic’s front end as it now emulates the brand’s latest rendition of the Camaro.

The side profile remains almost the same with the exemption of the new set of wheels that have more detailed spoke design. On the other hand, the rear end boasts a new tail light and a blacked out lower bumper accent which houses a redesigned exhaust tip.

Meanwhile, the inside gets a big boost in entertainment features due to a new touchscreen infotainment system. This head unit supports Android and iOS devices through Android Auto and Apple CarPlay, respectively. And for those in need of an immediate internet connection, Chevrolet also fitted it with an optional 4G LTE Wi-Fi hotspot transmitter which can hook up to 7 devices. 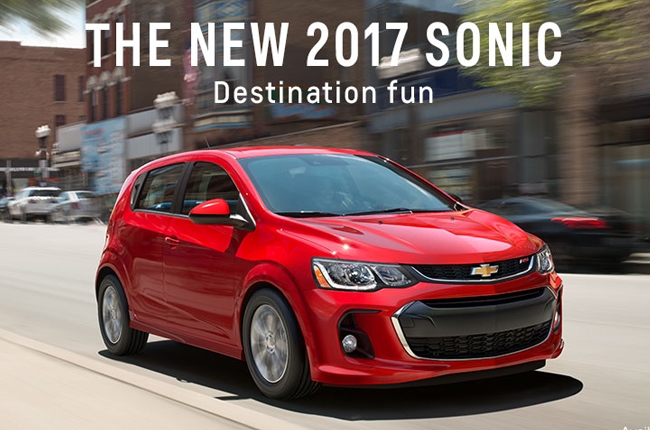 When it comes to safety, the 2017 Sonic has everyone covered with features like 10 standard airbags and a high strength steel frame. It also comes with advanced safety techs such as Forward Collision Alert, Lane Departure Warning, and Rear Vision Camera.

Lastly under the hood, the latest Chevrolet Sonic comes with a turbocharged 1.4L inline 4-cylinder gasoline engine with 138 hp on tap. Drivers can also take command of a 6-speed manual transmission.

Now here’s the catch; this latest Sonic is an American version. No one knows exactly when or if its local spec will come out, though we’re optimistic that Chevrolet Philippines will bring it in real soon. On the bright side, they’re still offering the current model in both automatic and manual variants.

To know more about the Chevrolet Sonic and to get updates on Chevrolet Philippines, check out their AutoDeal Car Guide.