Portugal competes under the GT300 division and was looking to shake off team W-Autosport’s Willie Torres from the top spot. Aside from him, Joel Portugal and Allen Macaraig also made their season debut under the GT150 division.

In contrast with the wet and wild 2nd round, a much more forgiving weather greeted the racers as they began the 10-lap morning Sprint Race, laying rubber for the first time on the newly-asphalted 3.4 km racetrack.

As the race began, Dondon Portugal quickly took command of the pack. It was all good until a mechanical problem cut his momentum with just 4 laps to go. He was forced to retire on lap 6. This allowed Willie Torres to take the lead and win.

Down in GT200, Paolo Mantolino crossed the line in 1st place, followed by Walter Zamora in 2nd and Richmon Dela Rosa in 3rd.

In GT150, Allen Macaraig took a nasty shunt early on in the race. He retired on lap 2 after his car rolled over. Thankfully he was ok. The race ended with Patrick Dela Rosa in the lead, followed by NR Joaquin and Dindo De Jesus in 2nd and 3rd places, respectively.

Lastly, it was a close victory by Ivan Diaz in the GT100 with just 0.400 seconds separating him and 2nd placer Edwin Rodriguez onboard his Mazda 2 SKYACTIV race car. Joginder “King” Sin took 3rd. 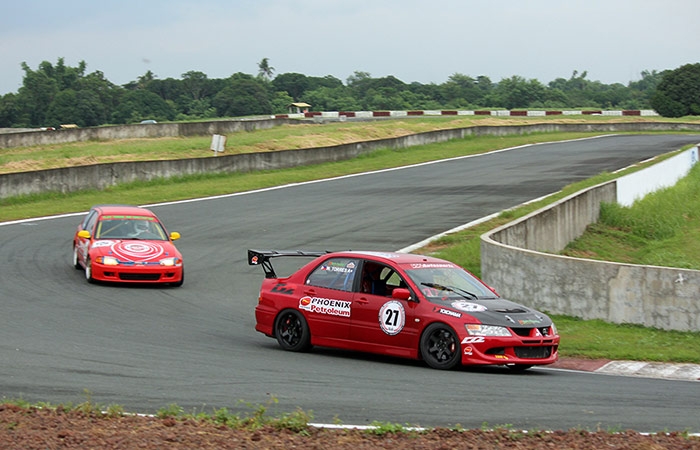 After some quick repairs, Dondon Portugal’s Mitsubishi Lancer Evo VIII race car was good to go once more. When the afternoon’s 17-lap GT Race went underway, he made sure to take it home from start to finish. He crossed the line 52.678 seconds ahead of Willie Torres.

In GT200, it was an intense battle between Paolo Mantolino and Richmon Dela Rosa. But Mantolino encountered a puncture on his left front tire. This forced him to enter the pits, thus handing over Dela Rosa the lead. Dela Rosa clinched 1st place, followed by Walter Zamora in 2nd. Mantolino settled for 3rd.

It was Patrick Dela Rosa again who clinched 1st place in the GT150. He was followed by Dindo De Jesus in 2nd and NR Joaquin in 3rd. The event also saw a number of support races. In the Philminiracers Classic Mini, the Open Pro Class Final was won by Jason Choachuy, followed by Rodney Caballero in 2nd and Borgy Zoleta in 3rd. Meanwhile, the VW Beetles of Dexter Daquigan, Raffy Locson, Arman Salada took their respective podium spots in both the Pre-final and Final Races of the Classic Aspirated Cup.

The top 3 finishers in the action-packed Bracket Race of the Sparco Cup were Eduardo Suiza,  Jey Jey Beredo, and Lewy Manio, while the Grid Race which was won by Paul Henderson Perez, Emerson Ocampo, and Eduardo Suiza.

Round 4 of the 2015 Yokohama Philippine GT Championship will return to the Clark International Speedway on August 29/30. It is sanctioned by the Automobile Association Philippines (AAP), sponsored by Yokohama Tires Sales Philippines, Inc., Sparco, and Aguila Auto Glass with support from the official dyno provider, Speedlab.