Ford Philippines, after a cancellation due to the COVID-19 pandemic, improvises and launches its newest Everest variant to the Philippine market. Through the online launch, the new Everest Sport officially goes on sale with reservations now open. Ford Philippines is offering an incentive for buyers that will reserve a unit before May 31, 2020, in the form of a free 3-year scheduled service plan. 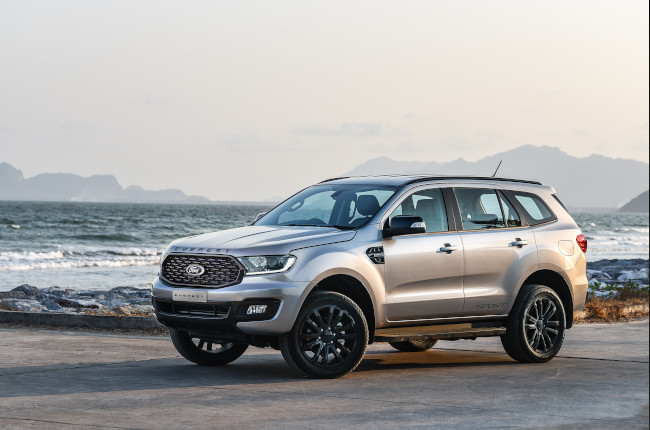 On the outside, the Everest Sport features new additions that spruce up the already-good looks of the Everest. With a new mesh grille that is reminiscent of the Ford Ranger FX4, blacked-out wheels, as well as black accents that can be found all around the car. You even get a front-mounted 'Everest' badge above the blacked-out grille, which is a nice touch along with the 'Sport' decal that can be found in the rear quarter of the SUV. The variant rolls on 20-inch black aluminum-alloy wheels that tie everything together. All of these features make for a subtle but substantial change that extends the look fo the midsize SUV. As for color options, Ford Philippines offers the Everest Sport in four colors. You have core colors that can also be found in the standard Everest such as Arctic White, Absolute Black, and Aluminum Metallic. There is also a variant-exclusive color called Deep Crystal Blue, which is the poster-color for this new variant. The attractive interior that the Everest Sport is known for is largely the same, except for some notable inclusions. On to the seats, the entire cabin is clad in black leather with blue stitching found on the steering wheel, seats, dashboard, and door cards. A debossed ‘Sport’ logo is also featured on the front seats. You can expect a good array of tech and features in the Everest Sport. Most notably, you have the same Sync 3 8-inch touchscreen infotainment system that features Apple CarPlay and Android Auto that outputs to a 10-speaker audio system. As for other creature comforts, the SUV comes equipped with an 8-way power driver seat, smart keyless entry with a push start system, and a power liftgate with hands-free features. Ford also bundles this car with a rear-view camera and parking sensors.

Safety is fully featured with a total of 7 airbags which include driver, passenger, side, and curtain units. As for other safety features and driver assists, the Everest Sport features Electronic Stability Control, ABS with Electronic Brakeforce Distribution, and Roll Stability Control, a burglar alarm and ISOFIX child seat anchors in the middle row. As for the specifications, the Everest Sport has many of the same specifications as the high-end Titanium variants. Standard features for the model include LED headlamps with DRLs and fog lamps, the 2.0-liter single-turbo diesel engine that produces 178 hp and 420 Nm of torque. The drivetrain is only available in a 4x2 configuration, however, Ford Philippines hasn’t shut the door yet on a 4x4 variant from making its way to the Philippines. Power from the diesel engine courses through a 10-speed automatic transmission, which can also be found on the Ford Ranger Raptor, Wildtrak, and the rest of the Everest Titanium lineup.

As for pricing, the Everest Sport comes with only one variant with four color options. With all of its kit and even its capable powertrain, the model sits between the Everest Trend and the Titanium variants in the lineup in terms of features and price. At just P1,868,000, the Everest Sport features notable improvements over the entry-level Trend, and a good compromise of features from the Titanium, while adding style and uniqueness. On top of this, if you act now and reserve your unit, Ford Philippines offers the Sport variant with a free 3-year scheduled service plan if you avail before May 31, 2020.

You may reserve the Everest Sport with our “Buy Online” feature.