In the US market, the Ford Ranger lineup was expanded with a special Tremor Off-Road Package which goes beyond the already-capable FX4. That said, this Tremor package is currently the most off-road-capable factory-built Ranger ever offered in the US, and it’s set to be available on the XLT and Lariat trim levels with the SuperCrew 4×4 configuration. Apart from the increased ground clearance, the Ford ranger Tremor also benefits from an off-road-tuned suspension and aggressive Continental General Grabber tires. Those fine rubbers are then paired with a set of 17-inch Magnetic-painted wheels that functionally delivers 9.7 inches of ground clearance. Its front fascia has also been toughened with its new grille, that’s magnetic-painted and accentuated with black bars that run across the middle and red nostril accents in the corners. Notably, buyers can also opt for the optional body and hood graphics. 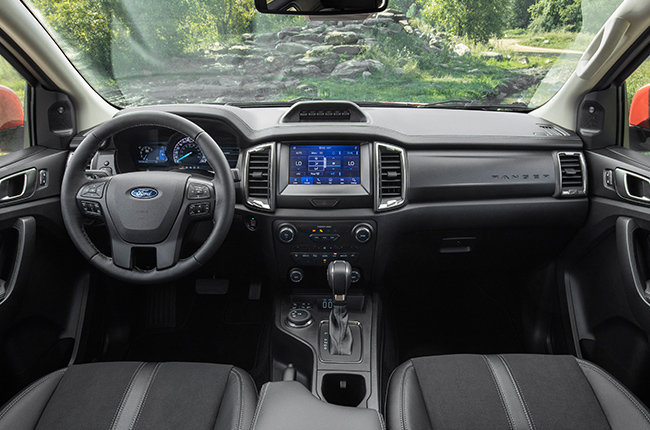 While maintaining the same interior layout, there are some notable features to mention, including the black accents, Miko suede inserts, and ‘Tremor’ details stitched into the seatbacks. One distinctive feature on the Ford Ranger is the 6-switch auxiliary power bank mounted to the dash, which is set to control accessories that owners plan to install in this pickup. Notably, the Front and rear springs were tuned for greater off-road composure without having to sacrifice that needed comfort. This pickup gets FOX 2.0 monotube dampers with rear piggyback reservoirs and hydraulic rebound stops, which promises that comfortable ride on the pavement while offering control over severe terrain. As for the rear, the Ranger Tremor multi-leaf spring setup which renders increased wheel travel. Notably, In order to heighten its overall comfort during off-road situations, its Anti-roll bar stiffness has been reduced to minimize disruption on rough terrain.

Aside from its suspension travel being increased to 6.5-inches front and 8.1 inches for the rear, the following off-road modifications were complemented by its 30.9-degree approach angle,  a 25.5-degree departure angle, and a 24.2-degree break-over angle. Apart from conquering almost any sort terrain, the Ford Ranger Tremor can also haul bikes, boats, and other necessary equipment for your adventure, all thanks to its 649 kg (1,430 pounds) maximum payload and available 3,402 kg (7,500 pounds) maximum towing capacity.

Its beating heart is a 2.3-liter EcoBoost, producing a healthy 270 hp and 420 Nm of torque. This mill is then paired with a 10-speed automatic transmission. As expected, power is sent via all four-wheels, it also gets Ford's Terrain Management System and an electronic locking differential.

The new Ford Ranger Tremor will be built at the brand’s Michigan Assembly Plant. This special off-road package requires buyers to shell out an extra $4,290, which equates at roughly P207,000 or so.