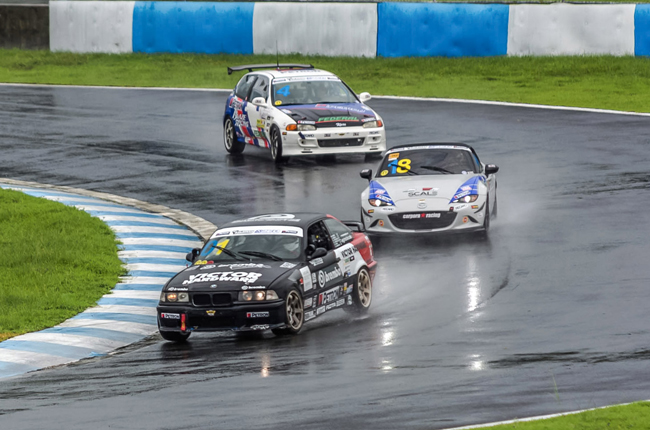 The 2018 edition Petron x Philippine Endurance Challenge saw the merge of 4 Oras ng Pilipinas and the Kalayaan Cup 12-hour race. This meant that some of the 23-car grid had to race for four hours, while others had to do up to 12 hours, providing plenty of on-track action.

Like any endurance race, the objective here is to make the most laps within the timeframe given. In this case, those who participated in the 4 Oras ng Pilipinas had four hours to do it, while entries of the Kalayaan Cup raced for 12 hours straight. In addition, teams had to put the pedal to the metal in a wet Clark International Speedway (CIS), which claimed three cars in the first hour of the race. For the 4 Oras ng Pilipinas, it was the #12 Shell Helix Ultra Honda Civic FD driven by the team of Estefano Rivera, Paolo Santos, and Andre Tan take a dominant overall and RP Class win. They were followed by the #5 Team Mango Suites x BM Racing Toyota Vios of Red Diwa and Francis Dysico in 4th overall, 2nd in RP Class, 3rd in FM-1, and took 1st place in both FM-2 and FM-3. Completing the podium is the #14 GT Radial Honda of Gerard Loy, Edward Dela Rosa, Uly Maninding, Don Pastor, and Michael Bryan Co was 3rd in RP Class.

With the first four hours up, participants of the 4 Oras ng Pilipinas entered parc ferme to give way to those who fighting for the Kalayaan Cup 12 hour race. For the next eight hours, it was the #1 AutoPerformance BMW M3 and #14 GT Radial Honda that went head-to-head, exciting the other teams and on-lookers. On the final time around CIS, the BMW driven by George Apacible, Jeff Borja, Miguel Dizon, Enrique Hormillo, Sung Jun Park, and Stefan Ramirez crossed the finish line to take the win just half a lap ahead. The #1 AutoPerformance BMW M3 drove a total of 243 laps and 1,018 km in the course of 12 hours. In third was the #6 Petron Blaze Racing ToraTora Honda Civic EK of Raymund Dimapilis, Thirdie Icasas, and Pepon Marave five laps behind the leaders.