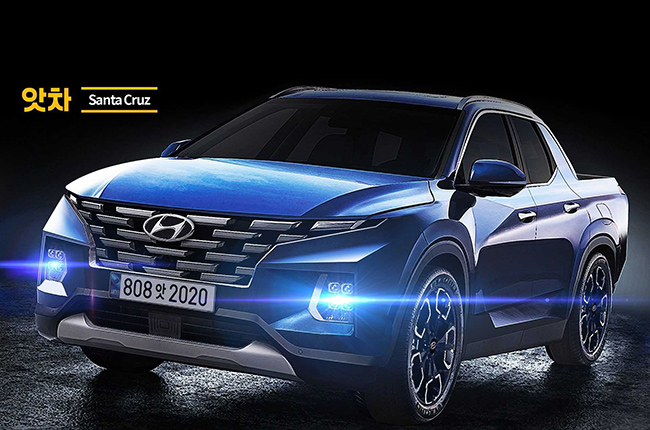 It has been 5 years since Hyundai released its Santa Cruz pickup truck concept. It actually became a standout piece during the 2015 North American International Auto Show, in fact it was recognized as ‘Concept Truck of the Year’ at the 14th North American Concept Vehicle of the Year Awards. Fast-forward to 2020 and the Hyundai Santa Cruz is nearly evolving towards its production form. With a number of spy images appearing online, many are already having speculations as to what the stylish pickup truck will soon look like. The image shown above is a rendered appearance of the unibody pickup done by AtchaCars, and it doesn’t seem too improbable that the pickup could look like this.

Related: Here’s an alleged sketch of the 2021 Hyundai Tucson’s interior

As compared with its concept, the sketch shows a different frontend which somewhat resembles previous spy shots. That headlights also sport a familiar design that happens to be reminiscent of the ones in the pre-facelift Hyundai Santa Fe and Hyundai Palisade. It is admittedly sleek and quite unique for a pickup, the grille is just massive as it extends up to supposed-location of the headlights. Like the rest of Hyundai’s lineup, the Santa Cruz has a well sculpted body which incorporates a number of well-planted and sleek body lines.

As for the interior, it’s still a mystery that has yet to unfold. Although, we bet this pickup will have a finely crafted interior that’s synonymous with the rest of Hyundai’s lineup. Powertrain options have also not been disclosed yet, although one of our prospects would be the brand’s 2.2-liter CRDi engine which should be made available on selected markets or perhaps a new gasoline engine which should qualify the emission standards of the United States, given that this model is set to be built at Hyundai’s Alabama plant.

Will Hyundai garner great success with its upcoming new player for the pickup segment? By the looks of it, the brand does have a serious contender and we just can’t wait to see it in the metal. According to other sources, this lifestyle pickup truck will begin production in 2021.