Geely has been on the rise in the Philippine automotive market. It has encountered great success with the launch of its highly-rated Coolray crossover. It even has plans to launch more Geely vehicles into the country in the coming year. With its success, only one factor is currently slowing the growth of the company and it’s the brand’s local dealership network.

As of now the Chinese Brand only has one dealership located along North EDSA. It also acts as the brand’s flagship dealership.

If Geely wants to sustain its growth, however, it will need to expand not only in terms of dealerships but service centers as well. Luckily the local website of the automotive manufacturer has revealed something interesting. 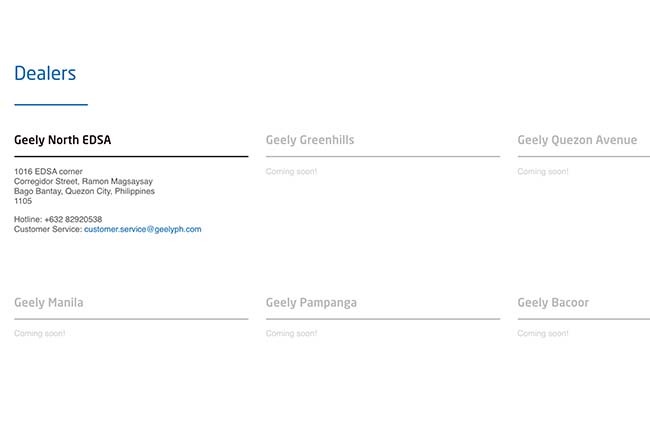 A quick click of the “Find a Dealer” reveals that Geely has plans to open 10 more dealerships. The exact time frame for these new dealerships to open is still unknown. But it does indicate that the brand wants to make an impact on the market. These dealerships will be located in Greenhills, Quezon Avenue, Manila, Pampanga, Bacoor, Davao, Cagayan de Oro, Iloilo, Cebu, and Batangas.

The majority of these new dealership locations are going to be found in Luzon and are in or around City areas. Geely is straying away from the conventional Chinese provincial approach and is heading for city areas. This shows that the brand is confident in its capabilities.

Not to be forgotten Geely also has plans to open up dealerships in the Visayas and Mindanao areas, hoping to capture the budding market in the area. A strategic foothold there could help the brand expand further in the future.

With new Geely cars coming in 2020 it’s not hard to see that the Chinese company is preparing for big things next year. They are after all one of the rare brands that make you do a double-take and ask yourself is this really a Chinese car I’m getting into or is it something better?