After being revealed in Thailand last January, Honda Cars Philippines, Inc. (HCPI) launched the refreshed City subcompact sedan, which now boasts a sportier face and a number of tech updates.

It is set to go up against the likes of the Toyota Vios, Mazda2, and Hyundai Accent, making the tightly contested local subcompact sedan segment even tougher.

At first glance, you’ll notice that the City has a new hexagonal grille, which is accentuated by the reshaped air vents. These complements the revamped headlights, which is now equipped with LED daytime running lights. The top-spec variant of the City, the VX+, comes with LED headlights and LED fog lights. The design tweaks mentioned is finished off with a set of diamond-cut aluminum alloy wheels. Inside, the facelifted City retains its simple and straightforward interior theme. The aircon vents and gear lever is now integrated with chrome trims, which gives the City an upmarket feel. In terms of tech upgrades, the VX and VX+ variants are now equipped with cruise control. The engine is carried over from the outgoing model, which is a 1.5L gasoline that puts out 120 hp and 145 Nm of torque. It is still mated to either a 5-speed manual or a continuously variable transmission (CVT). 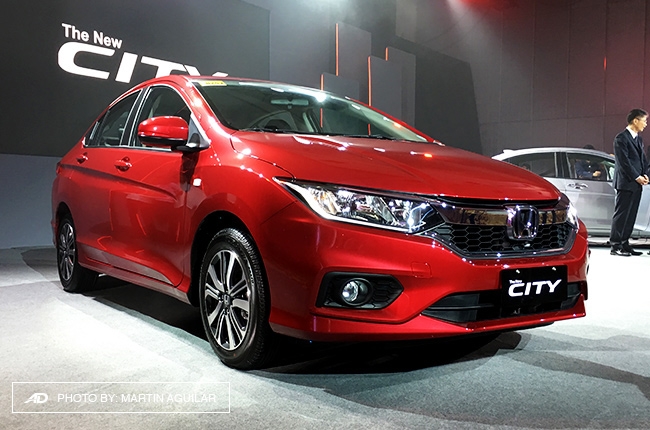