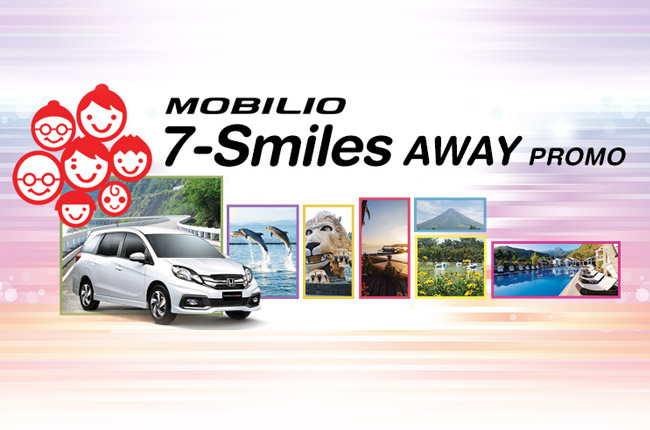 Honda Cars Philippines, Inc. (HCPI) is giving you a chance to win a family road trip of your choice with the Mobilio 7-Smiles Away promo.

To join the said promo, individuals must take a picture (most preferably with their family or friends) with the Honda Mobilio.Unlike other photo contests, you can send multiple photo entries.

The photo/s must be uploaded at HCPI’s Facebook page or Instagram account with a short caption that contains the following information: (1) Your dream destination (road trip only); (2) Who you want to go with; and (3) How the Mobilio would make the trip extra special.  The caption must also include the hashtags #Mymobiliotrip and #Mobilio7smilesaway.

In case you’re wondering how will they determine the winner, the entries will be judged according to the following criteria: (1) Photo Caption 40%; (2) Realistic Mobilio Trip 30%; (3) Originality/Creativity of the Photo 20%; (4) Audience Impact (no. of likes and shares) 10%.

All photo entries should be posted on or before June 30, 2016. On the other hand, HCPI will announce the winner on July 8, 2016 and the company says the trip shall take place anytime until August 31, 2016.

Of note, the winner must be accompanied by 4 to 6 people (either family or friends) by the time of the trip.

HCPI debuted the Mobilio last April 2015 as its challenger in the compact MPV segment. It is based on the Brio platform and it can sit up to 7 occupants. The Mobilio is powered by a 1.5L i-VTEC engine that delivers 118 hp and 145 Nm of torque.

For more information about the Honda Mobilio, visit the AutoDeal Car Guide.