The strengthening of public transportation has been top of mind for many Filipinos in recent years. With traffic in Metro Manila degrading into one of the worst in the world, it’s clear that something has to change with how we look at urban mobility. The government knows this more than anyone, and it has taken solid steps into augmenting our infrastructure capabilities to keep up with demand. There are currently several projects in the pipeline, either in the planning or construction stage. One of the biggest is the Unified Grand Central Station or Common Station. The Department of Transportation (DOTr) is laying the groundwork for this ambitious project, scooping up properties and rights of way in the site in Quezon City. In fact, construction is nearing completion, with the main structures on the 13,700 sqm lot in North EDSA already visible to the public.

Related: Common Station construction nearing completion according to the DOTr 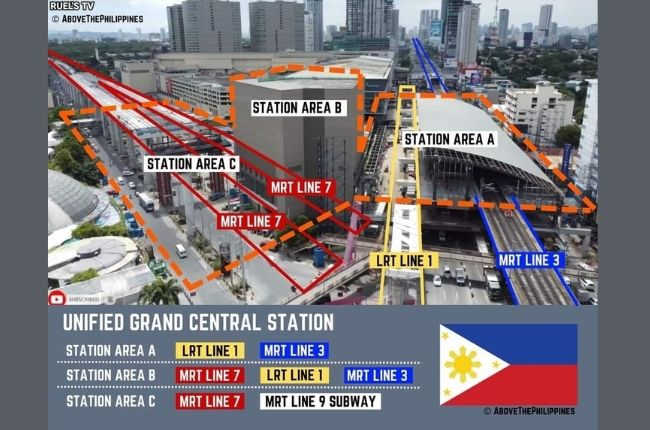 What’s not visible, however, is the potential connection points between the Common Station and other future railway projects. The Metro Manila Subway, slated for full operations in 2025, is one project that the DOTr wants to connect with the Unified Grand Central Station.

While that is some time away, the agency has already allotted space for the subway system as it joins the MRT-7 in Station Area C. Meanwhile, Station Area A will host the LRT-1 and MRT-3, with Station Area B hosting the LRT-1, MRT-3, and MRT-7. There are significant overlaps between the station areas, which are typical of a grand central station as seen in the designs from many other countries.

Once fully operational, the DOTr says the Unified Grand Central Station will serve up to 500,000 passengers every day across the various railway lines. The Common Station will likely emerge as a crucial transportation hub in the nation’s capital, one that could do much to alleviate the traffic and congestion experienced by motorists for the past decades.

As the Common Station is nearing completion, its inauguration could happen soon, perhaps as soon as this year. The Metro Manila Subway could also begin partial operations this year with the first three stations in North EDSA, Tandang Sora, and Quirino Highway.