Land Rover’s latest Range Rover is the highest-ranking large premium SUV today, according to the J.D. Power Automotive Execution, Performance, and Layout (APEAL) study in the US.

The study involved surveying more than 80,000 new car owners and gauging their product satisfaction levels during the first 3 months of ownership (February to May 2016). The survey laid out 77 vehicle attributes for the respondents to take into account. These include interior comfort, convenience, navigation/infotainment ease of use, performance, fuel economy, and safety features. The survey results were then analyzed and combined into a score index that’s measured on a 1,000-points scale

According to the results, the Land Rover Range Rover ranked as the top large premium SUV, scoring 872 points. Moreover, Land Rover is among the top 4 carmakers with a score of 843 points while its sister company, Jaguar, got 852 points which secured the 3rd spot. 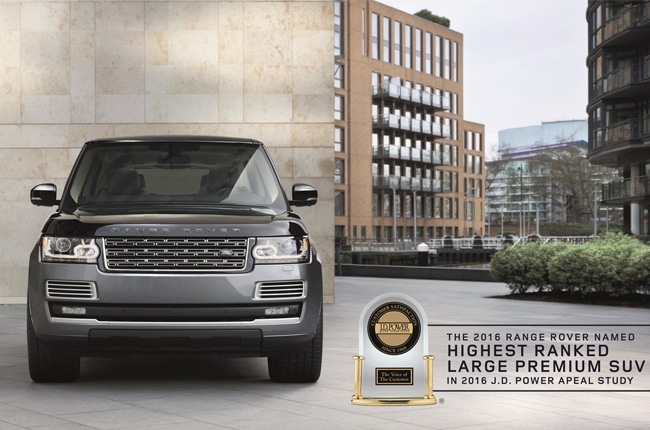 The Range Rover is one of Land Rover’s longest-lasting nameplates. It’s been around for more than 40 years. New for its 2016 model is a beefier V6 engine that churns out 380 hp. Here in the Philippines, it’s available in 7 different variants. It is powered either by a V6 or a V8 engine. The former delivers 255 hp while the latter comes with two kinds of power outputs; 335 hp for the SDV8 variant and 375 hp for the RR Vogue.