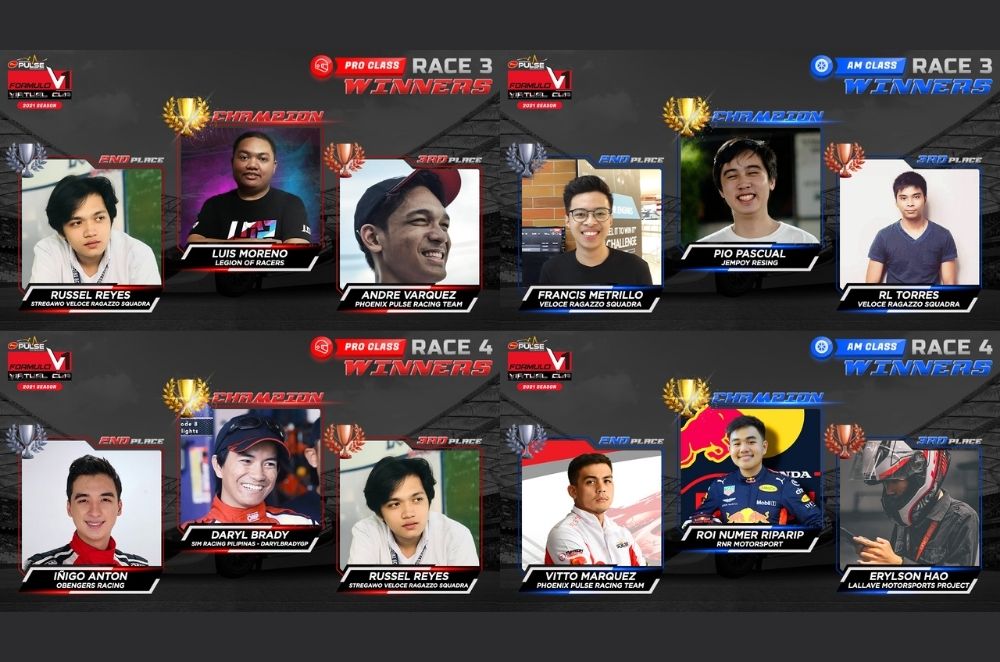 Round 2 of the Phoenix Pulse Formula V1 Virtual Cup has come and gone, and it brought a new set of winners to the local racing scene.

In the wake of the pandemic, virtual events have emerged as an attractive option for safe and fun racing experiences. Now in its second season, the FV1 Virtual Cup is continuing its promise of accessible high-octane action.

In total, 110 hopeful racers joined the second round when it started in August, but only a handful would come out on top. Races 3 and 4, which were broadcast live on Tuason Racing's Facebook page, were the epitome of spirited virtual racing.

Each racer fought with everything they had, but in the end, it was Veloce Ragazzo Squadra’s Francis Metrillo and Legion Of Racers' Luis Moreno who emerged as champions this time around.

In race 3, Metrillo showed dominance in the AM Class with his high race IQ and careful maneuvering. Jempoy Resing's Pio Pascual showed promise by recording the fastest lap of the race on his way to 2nd place. Meanwhile, RNR Motorsport's Roi Numer Riparip settled for 3rd place.

Moreno led the way in the PRO Class during the same race. The racer displayed excellent speed and control, which was ultimately enough to propel him to 1st place. In 2nd and 3rd place were Veloce Ragazzo Squadra's Russel Reyes and Obenger Racing's Iñigo Anton, respectively.

Race 4 was more of the same, exciting action. Phoenix Pulse Racing Team’s Vitto Marquez started at the front row on his way to a 2nd place finish in the AM Class. Racing Pilipinas’ Daryl Brady began the race in 2nd position and cruised his way to a victory in the PRO Class.

Racing fans have more to look forward to, as Round 3 of the Phoenix Pulse Formula V1 Virtual Cup will be broadcast live on November 13 and 20 on Tuason Racing and Phoenix Fuels' Facebook page.