The iconic MINI brand rejuvenates its model lineup in the Philippines with the introduction of the 2019 MINI 3 Door and 5 Door, together with the MINI Cabrio. The premium small car segment is the target for these stylish urban runabouts, with updates in colors, customization options, and technology.

The new MINI logo is represented in these models, appearing on the bonnet, tailgate, steering wheel, and central instrument display. Featuring a two-dimensional flat design, the new logo is subdued and minimalist. Highlights of the 2019 range of MINIs include full LED lighting up front, creating an unmistakable lighting signature. LED modules for low and high beam create stress free driving at night, and increase visibility substantially. Ringed running lights that transform into indicators make the MINI more visible to other road users. The rear gets an upgrade in the form of Union Jack tail lights, making it unmistakably British. The flag motif is recreated in the structure of the light functions. The turn indicators are horizontally arranged and the brake lights are vertically aligned, with the tail light additionally representing the diagonal lines of the British flag. All light sources forming the Union Jack graphic use LED technology. New colors, Emerald Grey metallic, Starlight Blue metallic and Solaris Orange metallic, are now offered, as well as a range of light alloy wheels in 17-inch size. 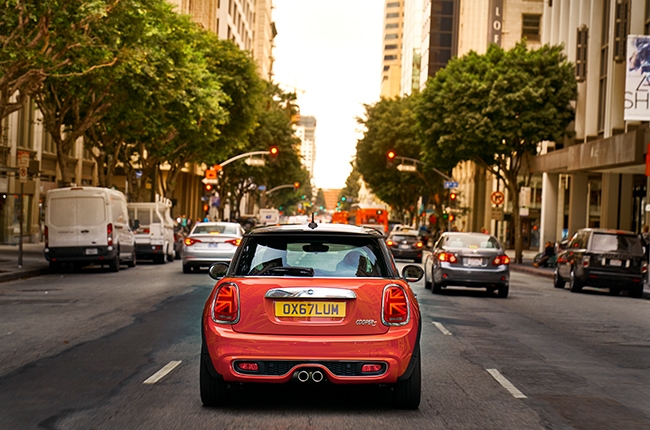 The engines stay the same (1.5-liter to 2.0-liter turbocharged gasoline and diesel powerplants) but updates in components such as the cooling system, turbo, and exhaust system, has reduced emissions and increased fuel efficiency. The engine covers are made of carbon fibre reinforced plastic (CFRP), so they are now lighter, too. A seven-speed Steptronic transmission with double clutch is available for the MINI range. All Steptronic transmissions allow use of the coasting function in MID and GREEN mode as well as the latest generation of the auto start/stop function. Navigation and front camera data can now be incorporated in the control of the latter, too. If the vehicle is fitted accordingly, this allows situations to be identified in which it is better not to switch off the engine: for example when stopping briefly before making a turn or entering a roundabout, or if the traffic ahead has started moving again. 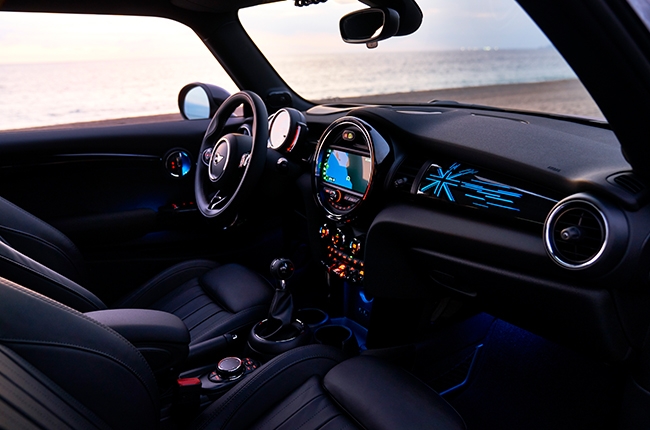 New interior touches and trims allow for a vast array of color combinations. New leather options paired with new ambient lighting updates create a fresh looking interior. A new steering wheel with multifunction buttons paired with a 6.5-inch color screen is standard, while a sports steering wheel is available as an option. The standard trim also includes an audio system with 6.5-inch color screen in the central instrument and mobile phone integration via Bluetooth. The Control Display offers a touchscreen function in conjunction with the optional Radio MINI Visual Boost and a navigation system. The optional MINI Excitement Package now also includes the MINI logo projection on the driver‘s side. When the vehicle is opened and closed, the new MINI logo is projected onto the ground in front of the door from a light source in the exterior mirror. All new MINI Cooper models are available for viewing at showrooms as of this writing and have the following prices: