Nissan’s been riding the wave of automotive innovations, from new EVs, to their campaign for ‘Intelligent Mobility’, the Japanese brand continues to innovate with new products and new technologies in order to keep up with the times.

The company already has a feature for autopiloting in cars, however Nissan has announced that the ProPilot 2.0 will be rolling out in its Skyline sedan in Japan. The feature supports hands-off driving when going down a single lane. Nissan stated that its next generation driver assistance system is a world’s first, even when other manufacturers have adopted similar feature sets. The system simply combines the wonders of cruise control, lane keep assist, and forward collision mitigation. 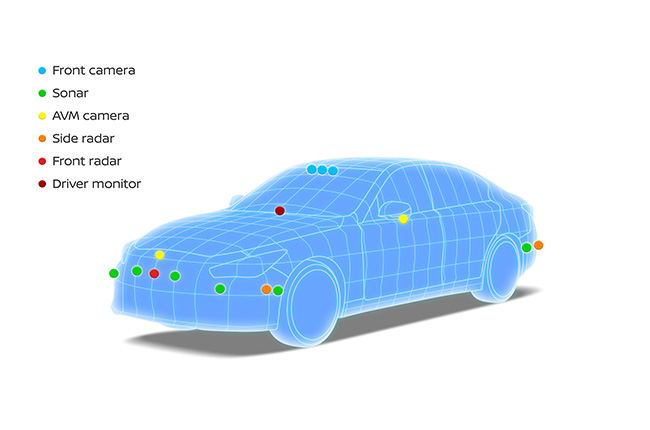 Like other systems, ProPilot lets the driver keep his hands off the steering wheel. Existing technologies all come together to make the magic happen. Sensors placed all around the car keep it in line while it rolls down the road. There are also warnings that will let the driver know of any impending danger that needs to be addressed and paid attention to. The system also has a 3D high-definition LiDAR maps for supported routes to ensure that the car follows rules and route information.

The navigation technology also incorporates ramp-to-ramp highway driving, similar to that of Tesla’s Navigate on Autopilot which the company is starting to roll out. As mentioned previously, the car will have to rely on driver input in order to make a lane change, either by deactivating the system by putting both hands on the wheel and making a lane change, or through the actuation of the turn signal indicator stalk. The Skylines that will have this system will come out later in the year, in the third quarter. While it is known as the Nissan Skyline in Japan, it is rebranded and marketed under Nissan’s more advanced and more luxurious logo, Infiniti. In the United States, the Infiniti brand is akin to Toyota’s Lexus division. There is no word yet as to when the rest of the world will get this technology, however it is not a stretch to say that Nissan is preparing to add this feature to their lineup in countries that have a lot of highways. It’s a matter of time before the system gets adopted by other countries because of the tedious amount of work that needs to go into creating a software and hardware that can be used on a public road that doesn’t require human input.