Suzuki’s newest addition to its lineup is the plug-in hybrid Across. If the design looks familiar to you then you’d be correct in assuming that it looks like the Toyota RAV4. The Across is the result of the latest partnership between the two companies. Through this new joint venture, Toyota will be supplying Suzuki with hybrid powertrains, as well as hybrid vehicles that are based on the RAV4 and the Corolla Wagon. Suzuki on the other hand will be producing two compact vehicles for Toyota in the Indian market that will be based on the Ciaz and Ertiga. On the outside, the Across looks very similar to the RAV4 changing very few elements from the actual vehicle. The only major difference between the two vehicles is that the Across comes with a different face. It adopts Suzuki’s signature design styling and takes on a thinner top grille and a much larger lower grille along with new fog light bezels. The headlights have also been tweaked to be sleeker and elongated. Aside from these differences the crossover’s wheels, body cladding, and LED tail lights remain the same as the Toyota RAV4. 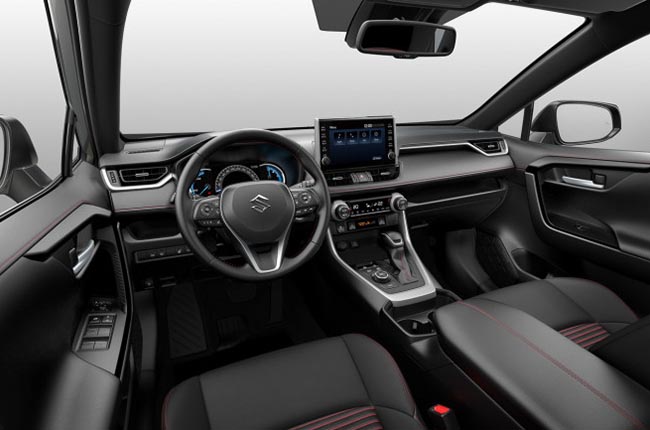 On the inside, the Across also shares the same cabin and interior layout as the RAV4 it is based on. The only difference between the two models is that Suzuki has added its badge on the steering wheel. Aside from that the Across also shares the same features found on its Toyota counterparts such as a 9-inch infotainment system that comes with Apple CarPlay and Android Auto capabilities. It also comes with dual-zone automatic climate control, leather seat material, as well as a control panel for the plug-in hybrid system. Powering the Across is a 2.5-liter four-cylinder engine that comes paired with two electric motors. The gasoline fed motor alone is capable of producing 175hp and 219 Nm of torque. The combined figure has not yet been released, however, since it is based on the RAV4 PHV we can assume that it makes around 296hp. Similar to its Toyota counterpart it will come with an all-electric range of 75 km and with an electric E-Four AWD system. The Across will be entering the market with a CVT.

There is no official news yet if Suzuki Philippines will be bringing in the Across into the local automotive market.