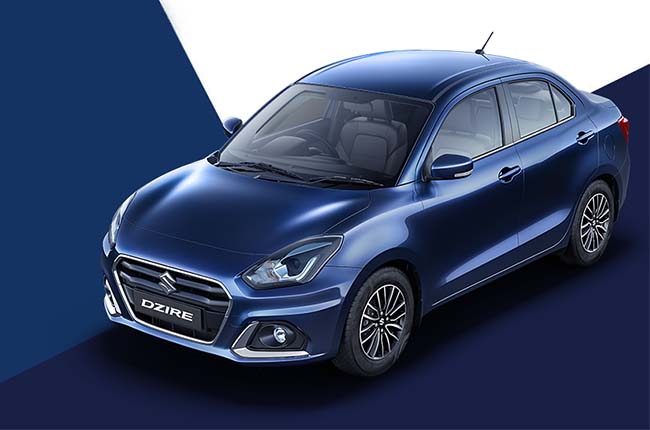 Suzuki India gives its 2020 Dzire subcompact sedan a new sleeker look with a minor facelift. The changes can be found only in the front of the vehicle. It now comes with a new single-frame hexagonal grille with horizontal slats. The front bumper has also been updated with bigger and sharper foglight housings with chrome accents. Aside from the minor changes to the front the rest of the Dzire remains identical to its predecessor.

Just like the exterior, the interior also remains the same in terms of features. The Indian version of the Dzire is kitted out with a 7-inch touchscreen infotainment system that comes with in-car navigation, Apple CarPlay, Android Auto, and Bluetooth among other connection capabilities. Other features of the Suzuki sedan include automatic climate controls, auto headlamps, rain-sensing wipers, cruise control, and more.

With over 55 percent market share in its segment, Dzire is the preferred sedan of over 20 lakh (2 million) customers. Building on overwhelming customer response, 2020 Dzire offers next-generation K-series engine with segment-first idle start-stop technology (ISS), upgraded premium exterior design, refreshed interiors, and advanced features. As a Company, we have believed in bringing technologies that benefit the customers. The 2020 Dzire will help us to continue with our brand promise to offer products with state-of-the-art design & advanced technology to delight our customers.
Shashank Srivastava
Executive Director- Marketing & Sales, Maruti Suzuki India Limited Powering the Indian Suzuki Dzire is the familiar but uprated 1.2-liter naturally aspirated K series engine. The gasoline fed powerplant now makes 82hp and 113 Nm of torque. Transmission options are also the same coming in with a 5-speed manual or an Auto Gear Shift transmission. A notable change from the pre-facelifted version of the vehicle is the disappearance of the 1.3-liter diesel engine. Over in India, Maruti Suzuki has shifted to a cleaner lineup and has opted to drop the diesel fed powerplant in favor of cleaner and more efficient gasoline engines.

While the facelift is minor this could mean that Suzuki Philippines could be giving the local version of the Dzire a couple of minor tweaks soon. There is, however, no official word yet of the local branch of Suzuki will be bringing in the facelift anytime soon.