The Geneva International Motor Show is just around the corner (March 7-17, 2019) and manufacturers are on their last week of preparation. While we don’t fly to Geneva to see what’s going down there, we’re always on the lookout and we never miss. That is why when we were scanning Mitsubishi’s lineup for the show, we found something odd.

Mitsubishi's booth will include the following: the Engelberg Tourer electric SUV, as well as the 2020 ASX and the locally-launched Strada pickup truck (L200 in Europe). The list, however, included what the European market calls the “Space Star.” Just to enlighten you a bit, the Space Star is known in the Philippines as the Mirage Hatchback. Now, what could this possibly mean?

Let’s play a little private detective game here. The Mitsubishi Mirage has remained essentially the same since it was introduced seven years ago. That’s a hefty amount of time sitting pretty and not bothering to go for a major makeover (except for a facelift a few years ago). Seeing a restyled Mirage feels just about right but do we really think Mitsubishi’s displaying it at the 2019 Geneva? Well, we only do know one thing – displaying a seven-year-old car at the Geneva International Motor Show sounds strange. 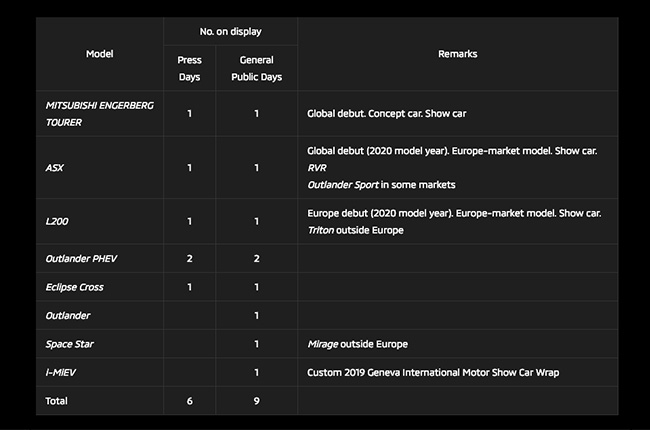 However, if you inspect Mitsubishi’s lineup and schedule for March, you’ll see that the brand is only displaying the Mirage on day two. Launching a new vehicle is best done on day one, where the press people swarm the venue. With that in mind, this could probably be the old Mirage (or a special version) and if that’s the case, maybe Mitsubishi’s only displaying their current European lineup. We think that makes more sense, while actually not making sense at all. Confused? So are we.

In addition, reports say that the tri-diamond brand is expected to launch the new Mirage in the third quarter of 2019. That could be more accurate speculation but, as we all know, speculations are only wild guesses and Mitsubishi still has the last ace on its deck of cards.

Be that as it may, we're still open to the idea of a surprise appearance – a concept display that’s so secretive, Mitsubishi didn’t choose the press day as its time of reveal. Oh, and we hate to break it with you but the image you see above is just a rendering, an unofficial one.

Our fingers are crossed, hoping for a probability of a new-generation Mitsubishi Mirage. We just hope Mitsubishi Motors Philippines Corporation won’t waste time in bringing it to the Philippines when it’s already out there.