In more affordable cars, you can expect a lower class interior especially in the realm of subcompacts. This rings true in the Haima M3 Standard, but keeping an open mind and a realistic perspective was more than enough to impress us even just a little. Again, it’s only P579,000, you cannot expect something priced as low to be as luxurious as a more expensive car.

As mentioned in the full review, the Haima M3 is a car that requires a certain perspective you do get what you pay for, if not a little more than usual. 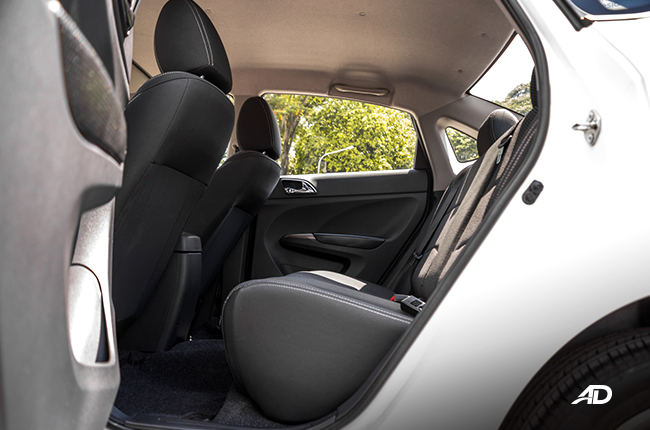 What you will like: Rear leg- and head-room are generous, vinyl wrapping on the door cards and armrest, better than average NVH levels.

It is no secret that manufacturers often target the interior when it comes to an affordable subcompact. It is possibly one of the easiest places to cut costs when safety, engine performance, and reliability are top of the list when it comes to the needs of consumers.

With that being said, the Haima punches above the price point advertised, but only ever so slightly. Stepping into the car you will find a rather handsome dashboard that uses denser-than-usual plastics. There is little to no wobble that can be found when applying pressure, which is a good sign. You will also notice that you won’t be as cramped; it’s not an Olympic swimming pool-sized space, but it is nice to know that the rear passengers will not be wrestling each other shoulder to shoulder. Another nice addition is the sound insulation that reduces noise vibration and harshness levels surprisingly well. What you won’t like: No seat height adjustment, driver and passenger footwell has a hump towards the middle, interior carpeting is low quality and door cards flex.

There is one bewildering item in the interior, and that is the floor pan in the driver and passenger footwell. While it does make sense for there to be a hump in the middle, it makes less sense that there will be a hump that extends to outward from the center.

It becomes more apparent that the Haima is limited by its price point when it comes to these items. Interior carpeting deteriorates over time, but with the thinness of the OEM carpets, we don’t expect this set to stand the test of time. Also, another item in the interior that is similar to the carpets are the door cards. When opening and closing the door from the interior there is a noticeable flex when pulling or pushing on the handle.

Overall, the Haima presents itself well and is acceptable for its price point. There are only a few minor annoyances here and there, but other than that it is a serviceable interior. Cargo volume with seats up: 450 liters

Accessing the trunk is as easy as lifting a lever, or slotting the key into the hole then twisting. Once opened, you are greeted with the same quality of interior carpeting, as well as the backs of the non-folding rear seats.

It’s not just about the space, but the accessibility of said space. It doesn’t matter if you have a 450L trunk when it is hard to access and utilize. The opening of the trunk is acceptably large enough, but adding bulkier items will be a bit of a challenge. Instead of shoving items in without any thought, you might have to plan ahead and place smaller items deeper into the car, since there is an arch that prevents bigger items from entering. So it’s not an accessible 450L, and numbers don’t tell the whole story.

You can compare quotations simultaneously from multiple Haima dealerships. Select your preferred dealers from the list below.

Get Notified about Haima Deals