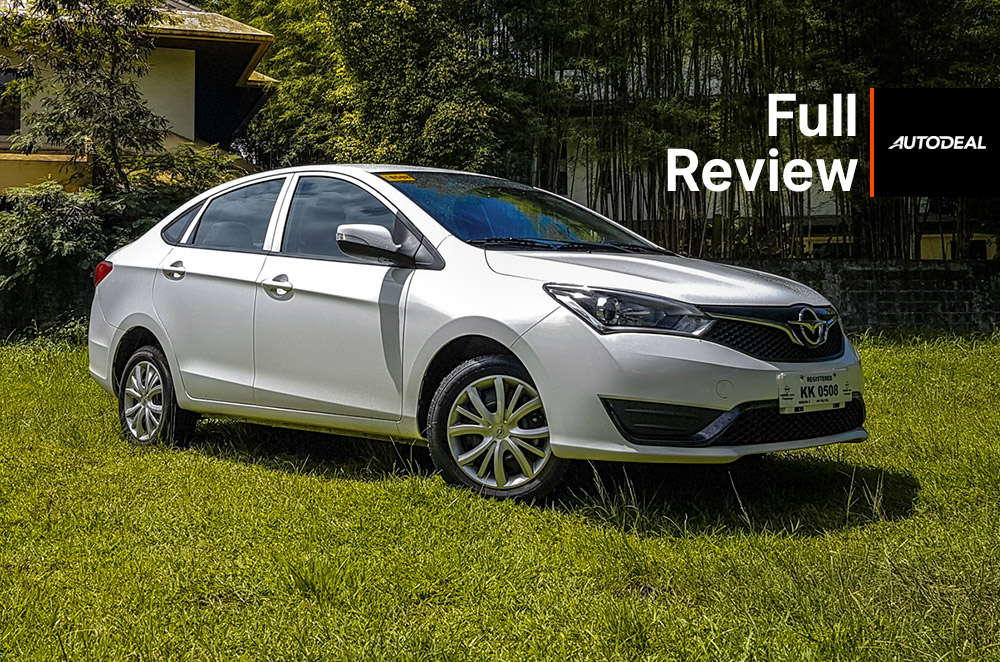 There are affordable vehicle options out there in the market. You can get yourself a small subcompact for not much money, but if you are willing to look, there are manufacturers that could offer a bigger option for the price of a smaller car. This was the formula that South Korean and even Japanese cars did in the past. Quality, durability, and practicality for not much money. This was the start of the story of these two countries’ journey to becoming automotive manufacturing powerhouses.

So why can’t another Asian country start the same way? Enter the Haima M3 Standard subcompact sedan. It’s the size of your typical subcompact but for less – a lot less. Coming in at P579,000, it is hard to fault the sedan for some shortcomings and cost-cutting. I went into the review knowing that it was just under P600,000. Because of this, I was more forgiving for things that I did not like.

Performance
Engine Output (HP), Acceleration, Transmission, Handling 3.0/5
Design
Exterior & Interior Design, Quality, Fit and Finish, Ergonomics 4.0/5
Ride Comfort
Cabin Comfort, Suspension, NVH Insulation 3.5/5
Safety and Technology
Convenience Technologies, Active and Passive Safety Features 3.0/5
Value for Money
Amount of the vehicle you get for the price, Fuel Efficiency 3.5/5
What You Will Like
What You Won't Like
How We Do Our Reviews It looks good – not bad at all. It punches above its weight when it comes to styling. It isn’t under- or over-styled, and it is subdued enough to fly under the radar. While it doesn’t evoke a sense of “wow,” its styling can make you go “what’s that?” It’s a Haima, and you can find semblances of the brand’s logo tattered all over the exterior and the interior. The headlights are a set of projector halogens that are surprising to see in this segment because most cars in this price range are only equipped with halogen reflectors. There are no DRLs whatsoever, but the rear has not one, but two fog lamps embedded into the rear tail light housing.

I really have no problem with the bodywork of the car. It looks presentable, save for the offset of the wheels. I wish that Haima put on a set that was wider or poked outwards. The M3 looks like it’s on stilts. Other than that I’m completely okay with the looks. 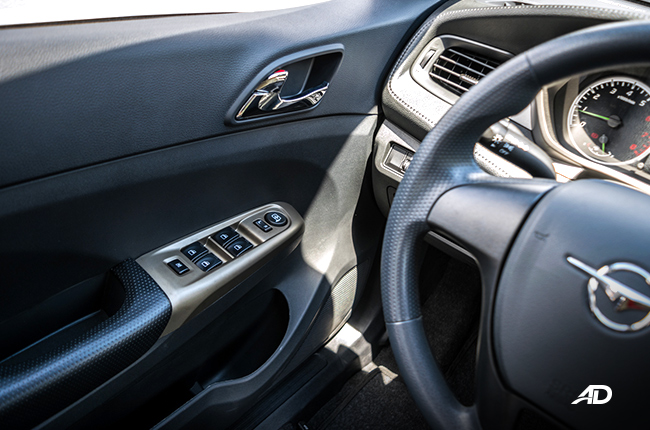 To get into the interior, you have to slot a key into the door handle and twist. There is no remote entry whatsoever. You have to walk up to the driver’s door, but at least it has a central locking system. That’s a sore spot for this car, but this is an extreme case of cost-cutting.

At first glance, the dashboard looks quite nice. The general shape of the dash is reminiscent of the Haima emblem. Materials are par for the course in this price range, with hard plastics ruling the entirety of the interior. It’s not hollow, but dense enough in most places. The door cards are made of thin plastic with a bit of flex. The saving grace of this part is the vinyl wrapping found in the armrest which is not normally found in other models of this price point.

Stepping into the interior is easy enough, the doors open and close with a surprisingly satisfying and dense thud. Now it’s not at the level of mid-tier compacts, but it’s not tinny either. The seats have no solid bolstering whatsoever, and to add insult to injury, there is no height adjustment, only rails and a recliner, so finding your perfect seating position may be a challenge. As for other touches, the shift knob is shaped nicely, the seats are reasonably nice to sit in, the armrest doesn’t wobble unnecessarily, but interior carpeting is amazingly bad. Even if the model was new, the carpets looked worse for wear. On top of that, the edges were poorly finished and fraying at the seams. There is a weird hump towards the center console of the car, hampering the overall space of the front passenger as well as the driver. 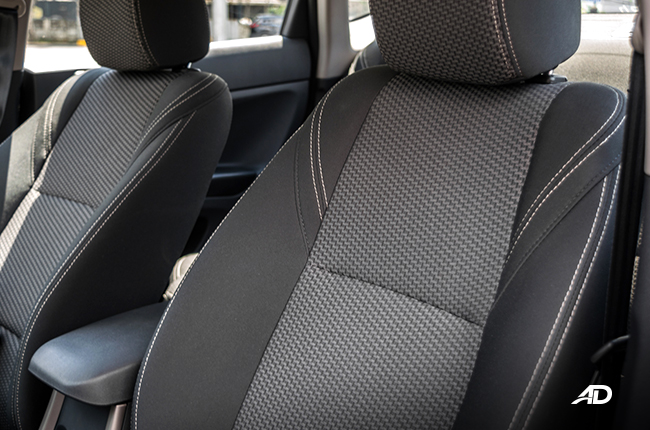 The rear passenger space is quite surprising. The legroom and headroom were enough for me to sit comfortably behind my ideal driving position and I stand at 5’8”. There’s seating for three passengers at the rear. Note that all of the occupants were not tall or wide, so fitting a larger individual in the rear will be challenging when hauling a party of five. The rear boot is listed at 450 liters, but it’s a small 450. The two strut towers coupled with a small arch create a narrow opening to the deeper recesses of the trunk. I was able to get a wheelchair along with a month’s worth of groceries, but this was a challenge for me since I had to play a bit of Tetris. 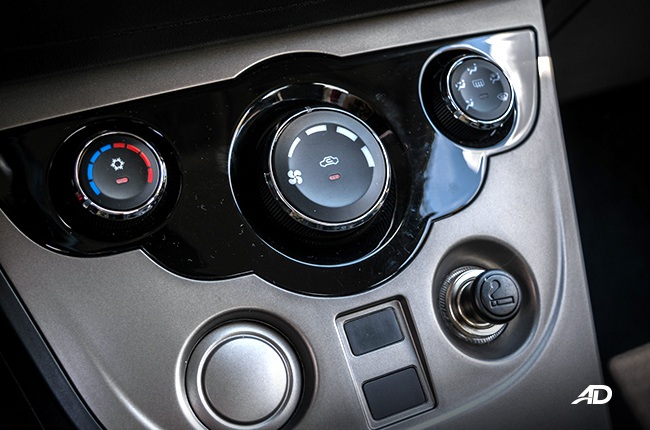 The infotainment here is very basic, only offering AM and FM radio functionalities coupled with a USB port. It has a port, but it doesn’t have an auxiliary input. Now, if you think you can plug in your phone and play your audio from your charging port, number one: the USB doesn’t provide enough power to charge a modern smartphone; number two: you can’t even route audio from your phone to this port. To be able to listen to your own playlist, you have to get a USB flash drive, load your files into it, and plug it into the Haima. Only then do you get to listen to your songs through the four-speaker audio system, which does sound quite nice.

What you do get are four power windows, a centralized power lock button, manual air conditioning controls, and manual leveling headlights. This is a vehicle stuck in time, because then again, money can buy many things, including more features. This car does have two airbags for driver and front passenger safety, but that’s about it. It has an immobilizer, ISOFIX tethers for child seats, and antilock brakes (ABS) with electronic brakeforce distribution (EBD). The driver also has a seatbelt reminder with a chime, none for the passenger. The M3 has a 1.5L four-cylinder underneath its hood. While other brands give consumers 1.3 liters or less, this Haima comes with more displacement and horsepower on paper. The engine produces a sizable 112 hp with 147 Nm of torque. All of that power courses through a 5-speed manual transmission.

A 1.5L engine is a top-of-the-line addition for most subcompacts, but sadly it didn’t feel like it. The engine was slow to respond. Any input with the accelerator took a good half-second to register, which made hill starts hard to do. Couple that with the vague feel of the clutch, and finding a good bite point is tough. If you don’t rev the engine slightly while in traffic, you may find yourself stalling the vehicle on occasion. This is what you need to do, but even when you stab the throttle, the engine takes too long to respond. The Haima suffered in stop and go traffic, but when streets opened up, it was a slow and relaxing drive whether you liked it or not. There is no semblance of athleticism when it comes to the M3. Acceleration neutered and lackluster compared to other 1.5L or even 1.3L engines. Anything above 60 km/h will be a task that will make the engine cry a little.

Even though this car won’t get up to speed quickly, it does have a shift indicator on the top right-hand side of the dashboard display. This virtual coach tells the driver when it is time to up- or down-shift for maximum fuel savings.

What surprised me was the lack of any noise vibration or harshness due to bumps or road noise. The engine bay was also padded, and the cabin is well insulated from the sound coming from outside; though higher-pitched sounds like sirens tend to penetrate the cabin much easier. To top it all off, the suspension was soft and comfortable enough considering its affordability. 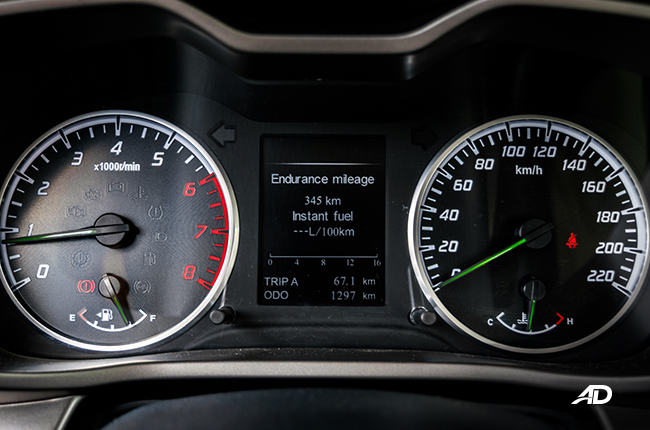 We had to calculate our fuel consumption manually this time around since there’s no digital trip computer that comes with this car. There is a range display, but we found that the figure was quite high and optimistic.

I went through traffic in this car and averaged a total of 7-8 km/L. I expected more, but considering my commute does have me traversing Quezon City, Pasig City, and Makati City, it’s an okay figure, but it could do better. What isn’t that great is the highway efficiency. Getting up to speed is not this model’s strong suit. Going at a steady 90 km/h is a challenge, but once it gets there, the engine hums noticeably. Because the engine was still working at a certain rpm, I was only able to get around 12-13 km/L on the highway. 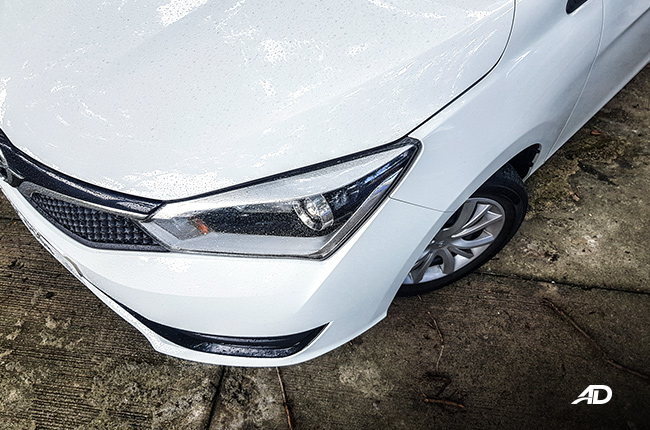 This is definitely a car for the city. Driving characteristics alone mark this car as a tool to be used to conquer the streets of Manila, however, it does become harder to recommend knowing that the clutch is vague making stop and go traffic a chore to go through.

Everything else is acceptable, and for the price you pay, there is a lot of space in store for passengers. Cargo space is not as good out back, however. So at P579,000, this Haima M3 Standard ticks most boxes, but it leaves engine refinement and driving dynamics sorely lacking.

Now, would I recommend this car? Only if you want to pay the least amount of money for the most amount of space in a subcompact. Other than that, it’s an appliance that will get you from point A to point B without too much drama. 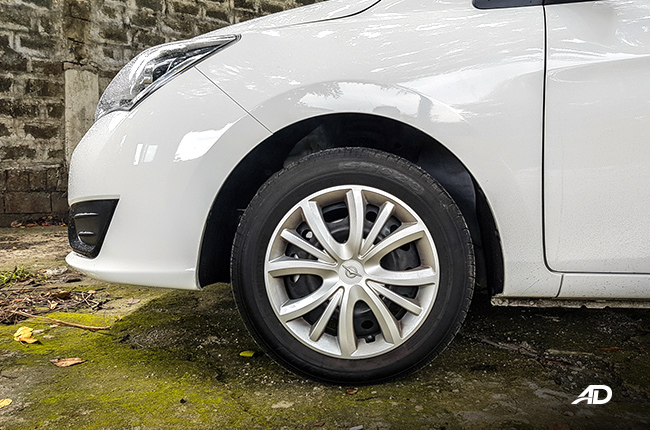 You can compare quotations simultaneously from multiple Haima dealerships. Select your preferred dealers from the list below.

Get Notified about Haima Deals