Compact crossovers are heaven-sent. They have the best features a practical car-buyer could ask for in a vehicle. They have relatively compact body dimensions for not-so-tight streets, high ground clearance for unforgiving Philippine roads, immense space for all the stuff and passengers you could fit in, and some high-tech features that can be found in pricier midsize SUVs.

However, the clincher for this market is the price range of the cars in it. Among the choices in this segment, the Kia Sportage is one of the first diesel-powered models, but it also has a steep P1,795,000 price tag for its range-topping variant. An eyebrow-raiser, really, especially if you consider the fact that it crosses the price range of bigger vehicles like the Isuzu mu-X or the Ford Everest.

Can this car justify its price? Kia Philippines lent us the Sportage 2.0 GT Line AWD to find out.

Performance
Engine Output (HP), Acceleration, Transmission, Handling 4.5/5
Design
Exterior & Interior Design, Quality, Fit and Finish, Ergonomics 4.0/5
Ride Comfort
Cabin Comfort, Suspension, NVH Insulation 4.5/5
Safety and Technology
Convenience Technologies, Active and Passive Safety Features 4.0/5
Value for Money
Amount of the vehicle you get for the price, Fuel Efficiency 4.0/5
What You Will Like
What You Won't Like
How We Do Our Reviews If there’s one car that remains true to its brand’s image, it is the Kia Sportage. This crossover looks fierce and aggressive at any angle, which supports the Korean marque’s signature tiger-nose grille.

The sculpted hood adds character to its face, and is a perfect match to its sharp, swept-back projector headlamps with three-bulb daytime running lights. Plus, the variant-exclusive four-bulb LED fog lamps stand out as the crowning glory to its design — it is unique and it makes the Sportage GT Line exceptional among Kia’s lineup, if not among all local vehicles. When turned to its side, the first thing to notice is the Sportage’s Y-spoke rims. Just like the fog lamps, it makes the car distinct. The rear end also has its own character, with its striped-LED taillights, skid plate, and dual-tip chrome exhaust pipes.

The only design feature that I’m not a fan of is its non-LED headlamps. Though it illuminates the road effectively, I don’t personally prefer its yellow and white light combination.

Overall, the Sportage’s exterior design is well-executed. It’s clear that Kia is on a mission to make it to the top when it created the Sportage 2.0 GT Line AWD. The dashboard layout of the Sportage is driver-centric. All the controls on the central console are angled towards the driver, allowing for ease in toggling the non-flimsy buttons, knobs, and levers. The gear-shift lever is also conveniently positioned for the driver. Its speed-sensing door locks, automatic headlights, rain-sensing wipers, parking sensors, and power-folding side mirrors add up to an effortless drive.

I can’t help but appreciate the elegant materials used for the Sportage’s interior. Most of them are supple leather with stitches and a few soft plastics. The flat-bottom steering wheel also feels nice to grip on. 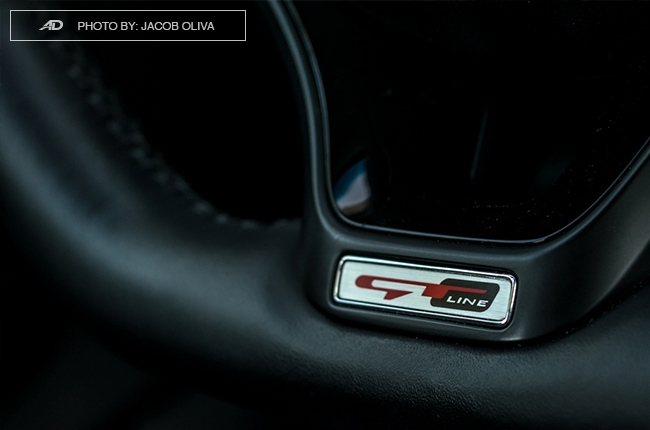 However, there are two things that could have been better inside this Sportage’s cabin. One of which is the material used for the dashboard that comes with faux-stitches. It looks nice, yes, but it is prone to dirt. Also, its texture can get sticky as the car grows older.

And, the other thing that bothers me is its head unit. The Sportage GT Line is surprisingly equipped with a non-touchscreen stereo system. Good thing, it can connect easily with smartphones via USB, Bluetooth, or auxiliary input. For someone who likes to listen to music while driving, I must say that the speakers sound really good. As mentioned in the beginning of this review, the best thing about crossovers is the huge interior space. The Sportage is a perfect example of that – be its front seats, rear seats, or the boot. I’m 5’6” with medium-built, and I can say that this car can seat three people of the same size at the second row with lots of leg- and elbow-room. As for the trunk, it’s so spacious that sleeping in it isn’t a bad idea at all.

This immense interior space is paired up with notable ride comfort. Its dual-zone air conditioning – that come with rear air vents – can cool the car easily. It also performs well in outside noise isolation and a huge (and I really mean huge) panoramic sunroof is available for added ambience. Last, but not the least, the Sportage has soft suspension which allows painless driving on unforgiving roads.

Drivers and front passengers can find their sweet spot for long drives with power-adjustable seats and telescopic steering wheel for the former. Powering the Sportage is a 2.0L diesel CRDi engine with electrical variable geometry turbocharger (e-VGT). It has a power output of 185 hp and 402 Nm of torque. These numbers might excite gear heads who like to drive fast, and they should, as I can attest to that during my drive with this crossover.

It was a spirited run with the Sportage. The engine responded promptly with every input on the accelerator, and the 6-speed transmission shifted quickly with minimal torque loss. Since the turbo is electronic, its lag was minimal and the added oomph kicked in at the right time. 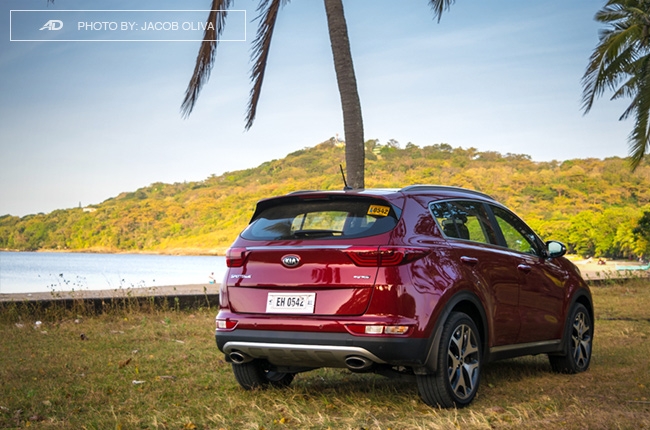 Paddle shifters were also available, so downshifting was possible when needed — but quite frankly, I never felt the need to use them. That’s how powerful its engine was, even when overtaking and on inclines.

The intense driving dynamics of Kia’s compact crossover was coupled with precise handling, thanks largely to its smart all-wheel drive (AWD) system. This made cornering easy and accurate as the torque on each wheels adjusted when needed. The steering also has great feedback, and it tightened at high speeds for a composed highway run. Speaking of highways, the Sportage was a light drinker with 19.2 km/l fuel consumption when cruise control was set at 90 km/h. On the other hand, EDSA traffic at 8:00 am read 9.1 km/l, while faster pace at 60 km/h average registered 14.3 km/l. These numbers improved by 12.5% after using the car’s ECO mode. Going back to the major question: Does the Kia Sportage 2.0 GT Line AWD justify its sticker price of P1,795,000? Admittedly, it’s a bit steep for a compact crossover. However, with its well-executed design, comfortable cabin amenities, and powerful yet fuel-efficient engine, I must say, it’s worth that price.

Never mind the non-touchscreen stereo system, or the lack of parking cameras and safety warning systems; this crossover is a driver’s car that comes with ample space to bring your friends or family out on a trip. Just make sure that they’re in for a fast drive.