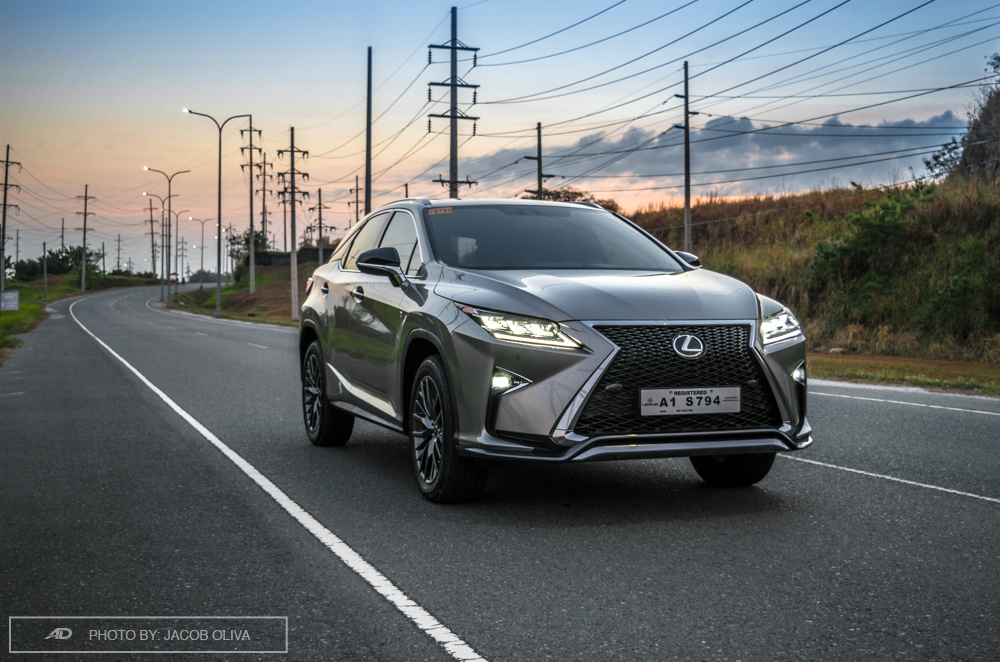 It goes without saying that luxury is something that not everybody can afford. That’s why there’s a lot of expectations when you’re inside a high-end vehicle. You’ll anticipate the best from it in terms of style, sophistication, features, and performance that you’ll unlikely see in mainstream cars. And when we talk about premium cars, European brands usually top the list.

However, Lexus begs to differ. As the luxury arm of ever-so popular Japanese brand, Toyota, there is something in Lexus cars that differentiates it from counterparts: the reliability and availability of parts at a much lesser price tag. And as observed during our review of the NX 300 F Sport and LC 500, the cars are at par, if not better, than its European rivals.

With that said, we took the Lexus RX 350 F Sport for a spin, to see if it lives up to what its brothers can offer.

Performance
Engine Output (HP), Acceleration, Transmission, Handling 4.5/5
Design
Exterior & Interior Design, Quality, Fit and Finish, Ergonomics 5.0/5
Ride Comfort
Cabin Comfort, Suspension, NVH Insulation 4.5/5
Safety and Technology
Convenience Technologies, Active and Passive Safety Features 4.5/5
Value for Money
Amount of the vehicle you get for the price, Fuel Efficiency 4.5/5
What You Will Like
What You Won't Like
How We Do Our Reviews 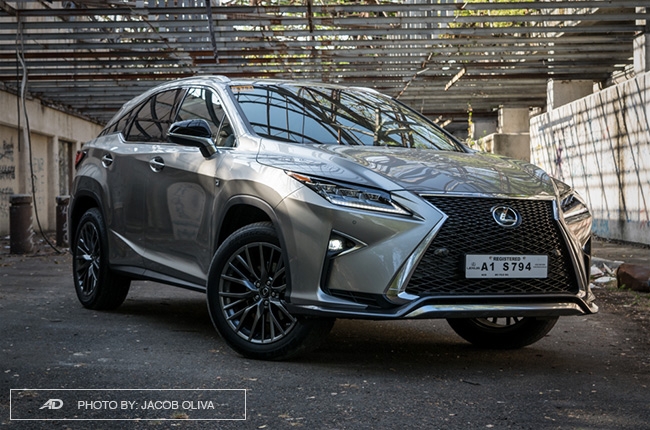 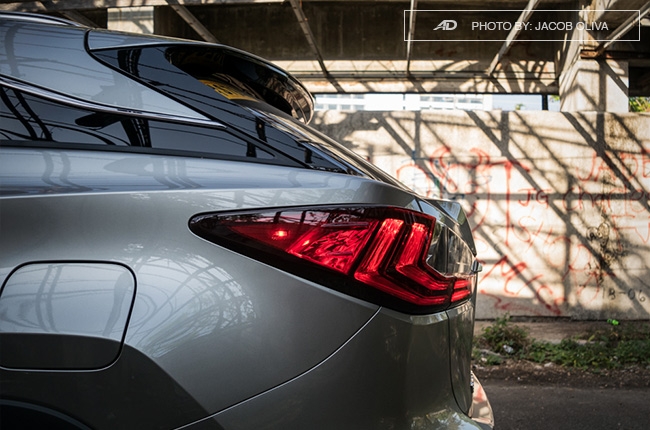 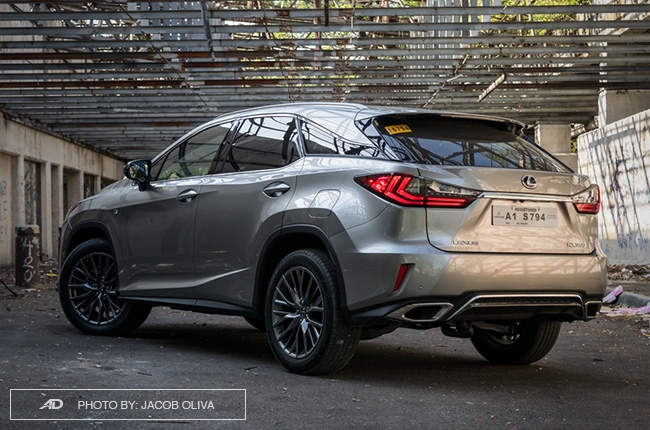 When Lexus launched the next-generation RX 350 midsize premium crossover, it was a bit of a stretch, literally. It’s essentially longer (2-inch longer wheelbase) than its predecessor, making it the biggest RX as of date.

Except for its height, it’s also bigger in every aspect than its sister company’s Fortuner, and that’s because this car is a crossover, as opposed to ladder-frame construction of Toyota’s midsize SUV. In turn, it gives the RX 350 a lower profile and aerodynamic advantage. 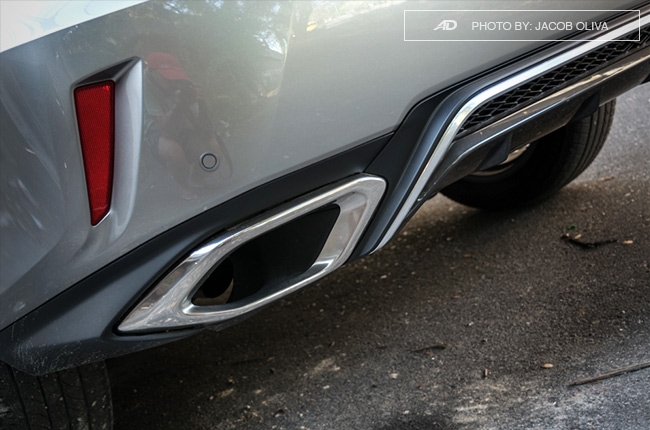 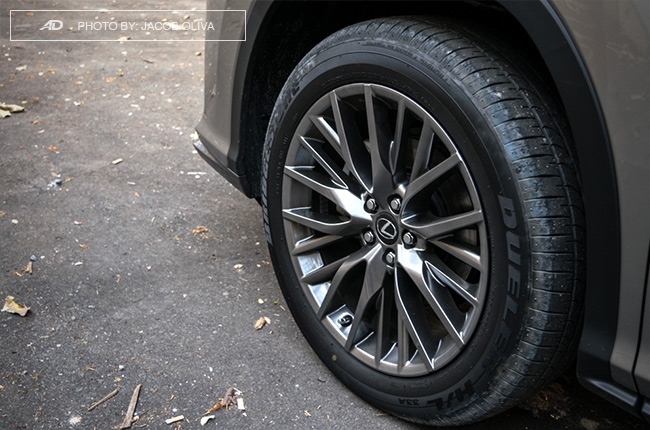 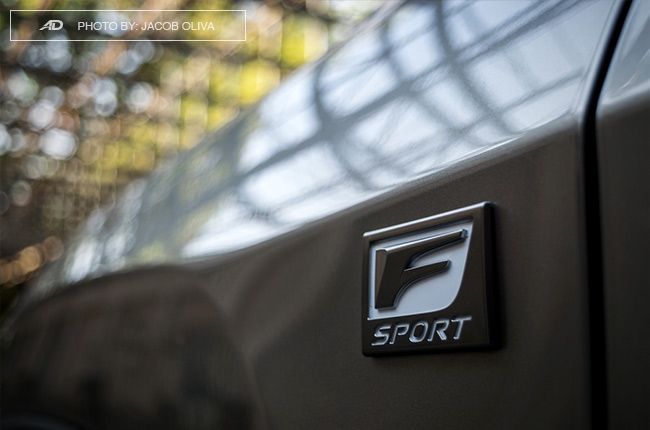 The fourth-generation RX 350’s styling is a huge leap from its previous versions. It’s youthful and active; add the fact that this media unit is the F Sport trim that’s gifted with variant-exclusive toys like better bumpers, thin-spoked rims, and a kind of odd-looking F Sport badge. Gone were the days of boring Lexuses — here we are blessed with what essentially is a family car that your kids would want to drive without your permission.

Although, when compared to the rest of Lexus’ lineup, the RX350 is more on the reserved side. Yes, the sharp curves, bold character lines, LED daytime running lights, and polarizing spindle grille make it look aggressive, but its size does make it look like it isn’t up to speed — until you see what’s under its hood and get behind its steering wheel. 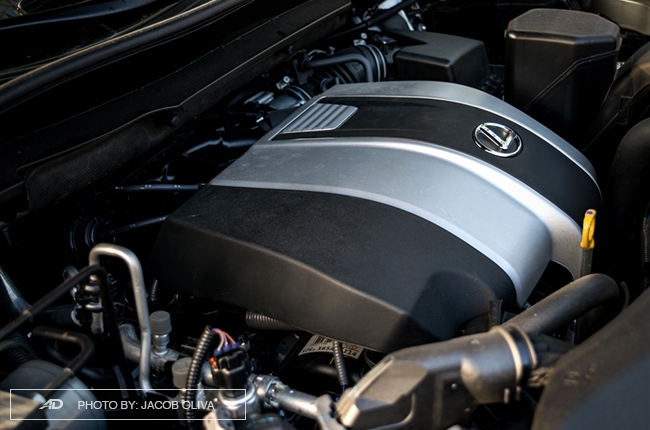 Powering the RX 350 is a 3.5L V6 gasoline mill that puts out 292 hp and 360 Nm of torque. That’s more than enough to catapult this car to 100 km/h from complete standstill in just 8 seconds. I didn’t test that, at least not with a stopwatch, but what I can tell is that it felt more on the road.

What’s great about this car’s engine is that it knows when you need the power and it feeds that to you instantly. Its 8-speed Sequential-Shift transmission spreads that power evenly and shifts smoothly, allowing for relaxed driving. And we’re just talking about when it’s in its Normal mode. Switch it to Sport mode and the car goes to life like a sleeping T-Rex poked from its good night sleep. Now, just imagine how it is in Sport+.

I’m actually thinking why it has paddle shifters, because honestly, it doesn’t need any. 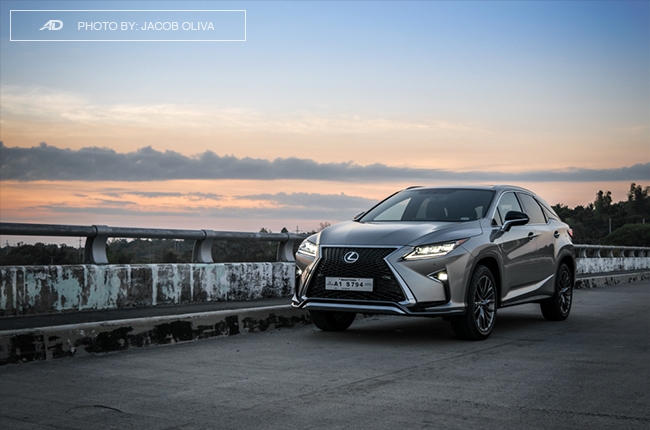 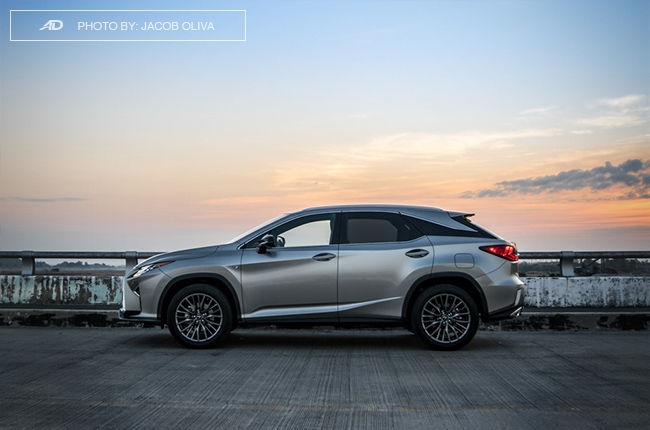 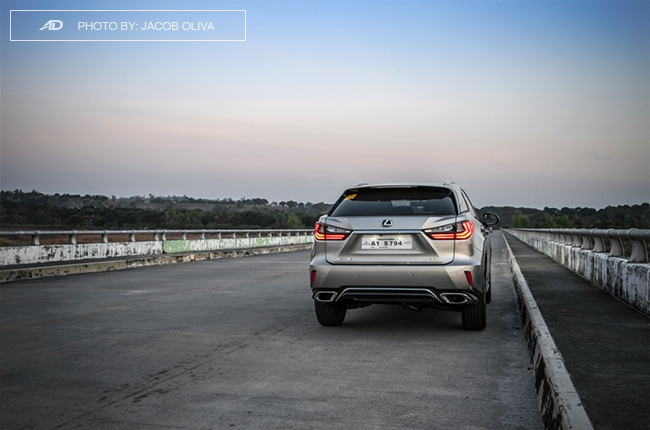 That mentioned engine performance of the RX 350 is coupled to a precise yet unabridged handling, thanks largely to its active all-wheel drive system. While the steering feels light and artificial at slower speeds, it tightens as it goes faster, which gives you confidence and stability during high-speed runs.

Best part? Even with a V6, the RX 350 wasn’t really a drinker. Steady highway drive with the cruise control set at 90 km/h clocked in 15.6 km/l. On the other hand, EDSA crawls at 15 km/h average read 4.3 km/l, while faster paces at 60 km/h registered 10.6 km/l. That’s pretty frugal for a 3.5L naturally-aspirated gasoline engine. 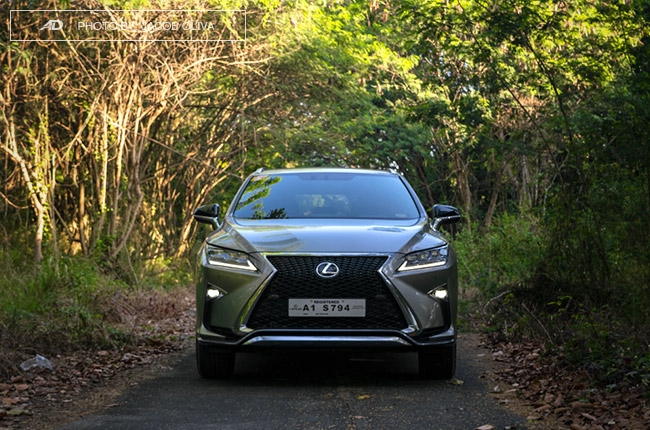 The RX 350’s exhilarating engine performance is well-complemented with noteworthy ride comfort. It has adaptive variable suspension (AVS) that constantly adjusts its shock absorbers depending on the road condition. This makes this crossover a versatile road companion — potholes and uneven cement are easy, while body roll is almost non-existent even when turning at a high speed — all in a package of luxurious interior and home-like features.

Its road noise and wind isolation works pretty good, too. The only thing you’ll hear inside the cabin is the roar of the V6 mill. Partnered with massive cabin space and perfectly-working air conditioning system, it isn’t hard to feel an emotional attachment with this midsize luxury crossover. Of course, you’ll expect nothing less inside the Lexus RX 350’s cabin. Even with just one look, you know it’s worthy of its hefty price tag. The leather seats are supple, the graphic instrument cluster looks good, and the materials used are of great quality.

Although, I must say, its huge infotainment system is both its greatest and weakest link. It’s easy on the eyes and houses a lot of things (even the vehicle settings), however, its joystick takes some time to get used to. Sure, it’s better than the NX 300’s touchpad, but it’s sensitive most of the times.

Good thing, its 11-speaker setup with subwoofer sounded top-notch and something I really enjoyed as a music lover. As expected, the Lexus RX 350 is gifted with numerous, well-thought of conveniences that you’ll likely expect from a luxury car — automatic headlights that turn with the steering wheel, rain-sensing wipers, electronic parking brakes, speed-sensing door locks, power windows that go up on its own, sun shade for the rear passengers, power tailgate — these things populate the list. There’s also a brake hold function, which is such a heaven-sent feature during bumper-to-bumper situations (hello, EDSA). All the seats are power-adjustable, even for the rear passengers. The driver seat has memory function as well, which includes side mirror adjustments.

Speaking of side mirrors, the right one tilts down when you’re backing up so you would see the curb. Cool, right? Well, wait ‘till you see the whole cockpit area opening up on its own when you switch off the engine for easy egress. 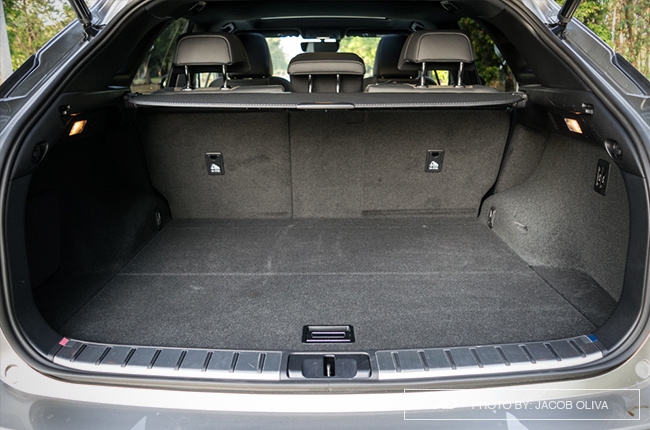 With all these conveniences, there are two small things that are oddly missing in the RX 350: blind spot monitors and lane keep assist systems. I mean, these two are pretty standard these days with high-end mainstream cars, so I’m not really sure why Lexus didn’t include them.

Nevertheless, with all the features that this premium crossover has to offer, would you really ask for more? Powerful engine, intuitive driving dynamics, smart cabin features, massive interior space, and great looks — the Lexus RX 350 offers all of these with a P4,708,000 price tag. Now, if you’re in the market for premium cars, you know that this figure is relatively lower than its European counterparts. What’s great about it is that this Japanese crossover can offer the same luxury that the others can, if not more, and that’s while promising parts-availability and reliability that its parent brand can offer. 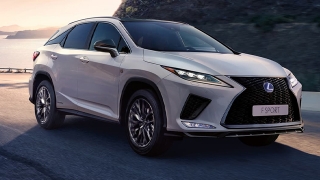 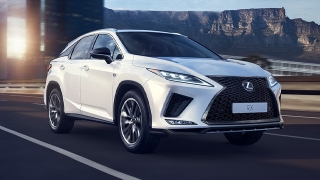