When shopping for a multi-purpose vehicle (MPV), what do car buyers look out for? Space? Ride comfort? Seating capacity? Engine performance? Flexibility? Reliability? Fuel-efficiency? It depends on the buyer, really, but there are things that should matter to everyone who’s looking for a people-hauler, and those are ride comfort, flexibility, and interior space. Price is, of course, the main consideration.

BAIC Philippines wants to challenge what the small MPV market offers by bringing in the M50S this year. Its main selling point? A very affordable price tag. But does it tick the right boxes for a solid family-hauler? I got behind the wheel of its Ultra Luxury variant for several days to find out.

Performance
Engine Output (HP), Acceleration, Transmission, Handling 3.5/5
Design
Exterior & Interior Design, Quality, Fit and Finish, Ergonomics 3.5/5
Ride Comfort
Cabin Comfort, Suspension, NVH Insulation 4.5/5
Safety and Technology
Convenience Technologies, Active and Passive Safety Features 3.5/5
Value for Money
Amount of the vehicle you get for the price, Fuel Efficiency 4.5/5
What You Will Like
What You Won't Like
How We Do Our Reviews 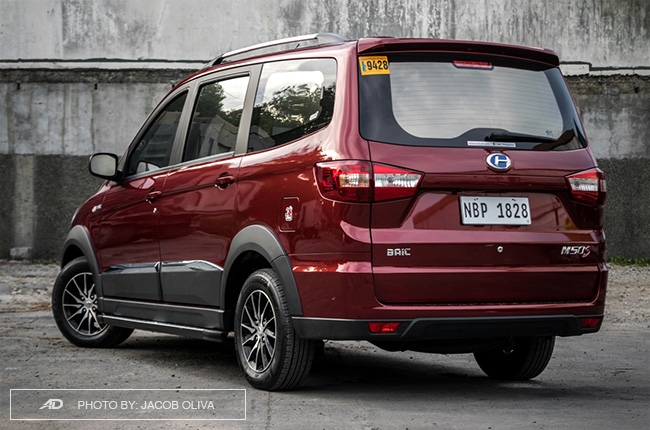 Up front, the 2019 M50S looks like your typical MPV – nose down and long body, almost looking like a minivan, sans the swinging mid doors. What sets the M50S apart from its main competitors, like the Toyota Avanza and Honda Mobilio, is its high roof. I understand that this isn’t everyone’s cup of tea but that high roofline obviously means more headroom inside the car. More on that later.

As for styling, it’s obvious that the M50S wants to cross the boundaries between sporty and classy – claddings that wraps the car’s underneath mixed with a generous amount of chrome accents found all over the fascia. I’m on the fence when it comes to the thick cladding, though, as it makes the 15-inch wheels look small. The M50S comes with decorative roof rails, so you won’t be able to add a roof rack to it. The headlamps are projector type with leveler, which illuminate nicely at night. It’s underlined by a set of LED clearance lights. Taillights, on the other hand, are bulb-type and combine with the high-mounted brake lamps to employ better prominence at night.

My only wish with the M50S’ exterior design are wider step boards but then, this car actually doesn’t need any since the floor is low enough for easy ingress and egress. 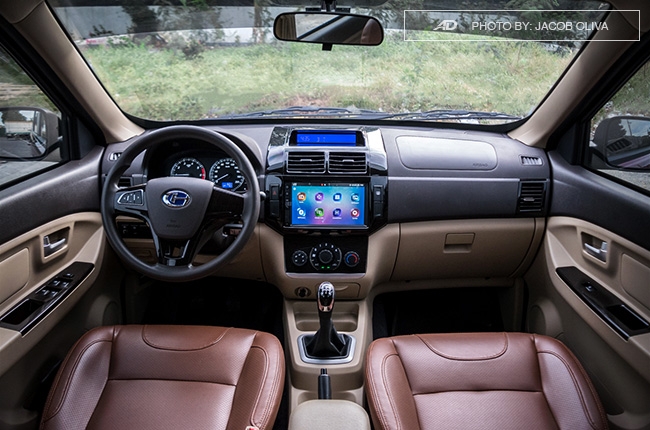 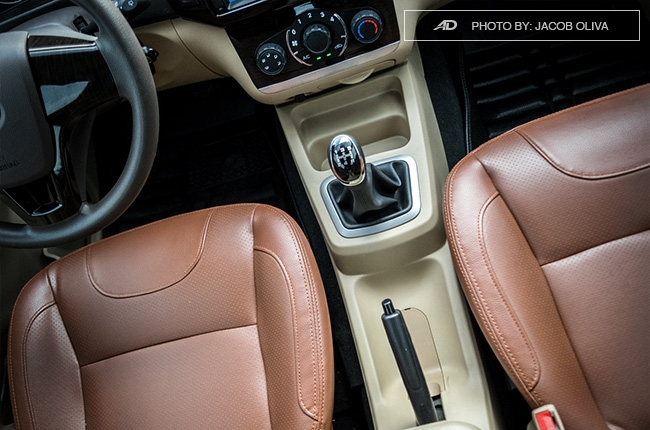 It’s important that you manage your expectations with the M50S interior amenities. It will not spoil drivers with electronic side mirrors adjuster – yes, it’s manual – but it has speed-sensing door locks and auto-down driver’s window. It also has manual lighting and rain wiper controls, placed in a pair of flimsy control sticks.

In contrast, though, the wiggle room while seated on the driver is adequate. I, who stands 5’6”, medium-built, and sports the hips of a woman, could fit snugly onto the driver’s seat with enough elbow room to steer clear. However, I really wish the steering wheel is adjustable so it would be easier to find a comfortable driving position. 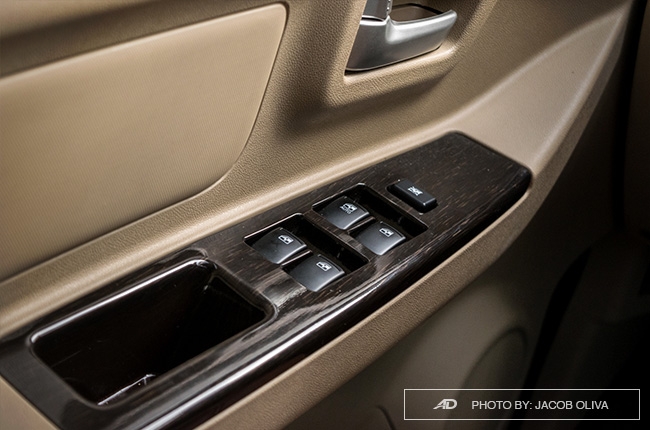 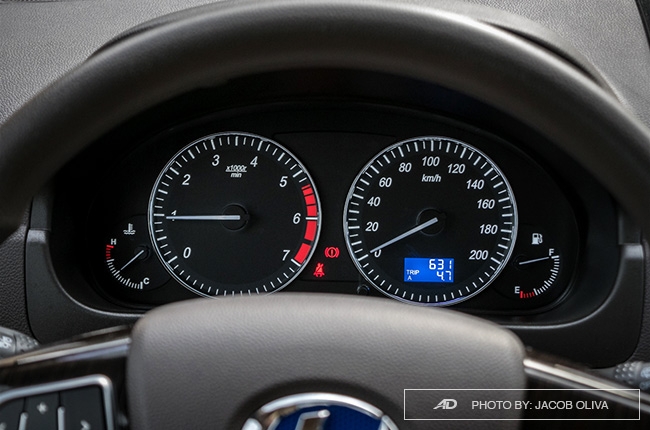 The plastic-laden dashboard has a few touches of faux-wood and a copious amount of piano black trim. The former is also found on all four doors and on the steering wheel. Apart from those, what I absolutely adore is the M50S’ beige color theme that’s easy on the eyes and radiates a light feeling. The brown micro-fiber leather feels soft to the touch as it is fine-looking. I’m really digging its coffee-flavored vibe.

The dashboard layout of the M50S is easy to understand. The controls are clustered together, sans the rear defogger that’s oddly positioned beside the infotainment system. Speaking of the infotainment system, the nine-inch touchscreen LCD has a crisp display, with Bluetooth and USB connectivity that works flawlessly. The microphone for handsfree calls can be improved, though. 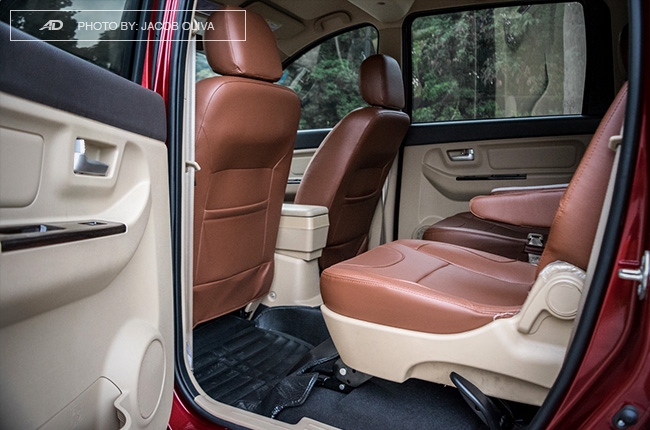 The gem of the seven-seater M50S Ultra Luxury are the two slidable captain seats that are found in the second row. Both are comfortable to sit in, making the whole riding experience a pleasure. The story’s the same in the third row, but three people at the last row would need adjustment from the occupants, albeit, legroom is more-than-sufficient. The trunk space is big enough to fit a child stroller even with all the seats erect, which could be further maximized by folding the third row. The tailgate opens widely as well, while cargo-loading and unloading are painless with the car’s minimal floor height.

This relatively roomy cabin is partnered with commendable ride comfort. What’s surprising is that even with the M50S’ rear multi-link suspension, it isn’t bouncy at all. It absorbs road imperfections effectively, complemented by a well-isolated NVH. As for air conditioning, it isn’t a problem at all during any time of the day. 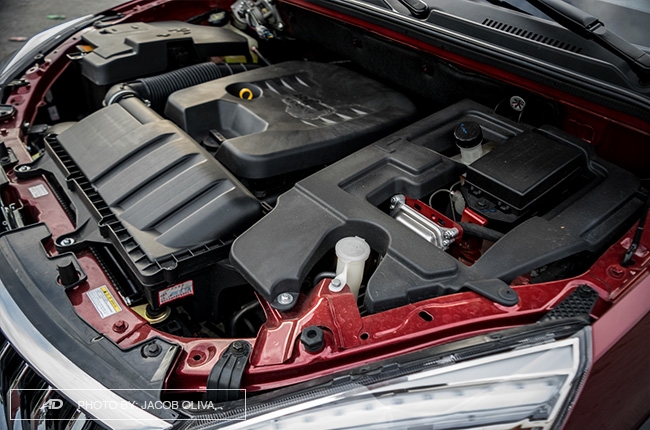 The M50S’ 1.5-liter gasoline engine is rated to produce 114 hp and 150 Nm of torque. Compared to its aforementioned rivals, BAIC’s MPV is almost on the same ground with the Mobilio. These numbers transcended on the actual drive as well.

Now, don’t expect a spirited type of drive with the M50S. After all, it’s an MPV, not a sports car. What the M50S did was to provide a satisfactory feeling at every step on the accelerator. The car could pull itself nicely on flat roads even when filled with passengers. It did take time to reach highway speeds, but it wasn’t a painful journey. Steep inclines were a bit challenging, though; good thing the car was equipped with a five-speed manual transmission, so it was manageable. In addition, I liked the M50S’ moderate clutch bite height. It wasn’t hard to familiarize with and driving within the Metro’s gruesome traffic situation wasn’t as bad as what I expected from an MT. My only complaint would be its mushy brake pedal but once engaged, the discs bit nicely for a safe halt. It was a cinch to shift the stick, too, but I felt a little cranking when shifting to both first and reverse gears.

The M50S’s handling can be improved as the steering wheel was too light to the point that it felt numb; tightening it could boost the car’s stability on curved roads and high-speed highway drives, and could work to its advantage as a rear-wheel-drive car. Nonetheless, its maneuverability within the city is optimal, especially with its wide driving visibility, huge side mirrors, and the assistance from its reverse parking cameras. Being bigger in overall size than the Avanza and Mobilio wasn’t an issue at all. Though the M50S doesn’t have a fuel economy meter, I could say that throughout the full four days that I was test driving the car, I was able to consume less than half of its 50L fuel tank on a total of 73 km of distance driven. Take note that I was driving the vehicle in heavy traffic 80% of the time.

At P668,000, the M50S Ultra Luxury is the least expensive in its class while having the most amenities, a handful of safety/security features, and a bigger body. It isn’t a driver’s car, but it’s more of a capable vehicle that can ferry your family from point A to point B in the most comfortable way possible. It offers a different aroma to the small MPV market, focusing on things that really matter – utmost comfort with a dash of coffee-flavored sprinkles at a very affordable price point.

Also, come to think of it, what other cars can you get that are equipped with captain seats dressed in micro-fiber leather with that price tag?