In the middle of 2018, Toyota Motor Philippines did what it does best, make other car brands and potential buyers stand in attention, with the launch of the all-new Vios. There was however a very large gap from the fleet variant, from the base J to the start of the consumer E variant. Derived from the   meaning to move forward, six months and a CVT later, Toyota gives potential buyers yet another reason not to stray, with this: The 2019 Toyota Vios XE.

There are many similarities to the G Prime which we reviewed, but the differences are also apparent. For instance, the front grille is only partially blacked out, and the housing where the fog lamps would have been, is a different shape altogether, like the tail of a plane.

Devoid of any skirts, the creases are still the same, above and below. Breaking my heart are the 14-inch steel wheels, with discs up front and drum brakes at the back. The side repeaters can be found on the body itself, an aspect we haven’t really seen in a while. Speaking of which, the side mirrors have no motor or little stick; to move it, you gotta poke it.

Gotta admit I do like the rear. As Jacob pointed out, it’s normal. Man of millions of words he is, but read his take on the 1.3 E Prime to get a better idea. The rear seats don’t fold down, but you have 326 liters of space even with a full-sized spare.

There are no toys for the rear passengers of the XE, just your average bottle holders on the doors. Elevated seats in the back mean good legroom and headroom. Like most subcompact sedans, you’re pushing comfort for 3, but not a problem for 2 passengers.

Durable plastics all around and not very many toys, as you’d expect, you do have a touchscreen but no camera or sensors. There is also a 12-volt socket here in a bit of an odd location, but it’s placed clever enough for anyone in the cabin can use.

The seats are firm, which suggests it will stand the test of time. The tilting steering wheel helps. Ah, and you don’t need to have OCD to find the steering wheel and the main cluster are a bit off. The air conditioner, however, is choice. Even on a hot summer’s day, given a bit of time, you’re good.

This 1.3L engine mated to a CVT produces 98hp and 128 Nm of torque, which means it’s no hare but it’s not a tortoise either. Our approximation on fuel consumption based on the 42-liter tank returned 7.3 kilometers per liter, which was achieved in the city and on the highway with mostly heavy traffic.

Vibration even at higher speeds is low, and the Vios handles within reason of a tame driver. It’s the cabin noise from the eco tires does echo a bit when on city roads, but it gets a bit less on the highway.

There are other models in Toyota’s line up, like the Yaris or Wigo, where the driver doesn’t excite you too much. Like this XE, it gets you from point A to B, without fault. There’s also the inner calm that you’re driving in the Philippines, in a Toyota.

The 2019 Toyota Vios XE CVT is listed at P735,000, which may have the manufacturers of the comparo we did a few months back in this exact price range, which you can see here, by the way, scratching their heads. See while it may not top that list, over 25 thousand units sold in 2018 has got the Vios saying “don’t hate the player, hate the game”.

As many variants as there are of the Vios, there are also plenty of promos available up and down the line on AutoDeal. It’ll do you well to check them out for the best prices nearest you. 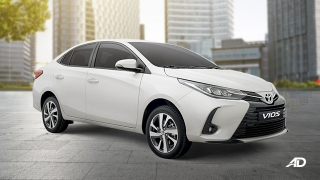 Reliable & Renowned - the Toyota Vios is a leading subcompact sedan that requires no further introduction.