There are plenty of subcompact cars on the road, however, there is a handful that really captures your attention both while driving and sitting still. One of the most popular nameplates in the Philippines, the Honda City has evolved into something quite amazing. From its roots back in the early 2000s to the present day, the sedan has come a long way. Once an ugly duckling, the City has since grown into an attractive package. So here are 5 things that make the City a worthy successor over the previous generation. 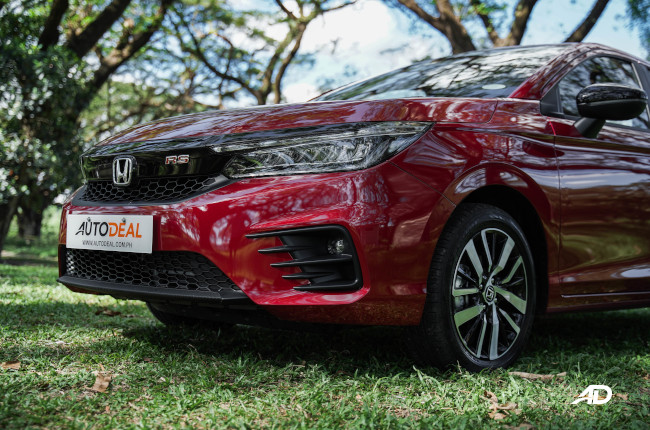 Honda has had a pretty good run with its designs, and the City certainly is no exception. The clean lines give the City such a mature look in its lower trims, but the variant that is arguably the best looking of the bunch is the RS model. While the V trims and lower have very classy exteriors thanks to the Accord-like exterior design, the RS variant has a very attractive sportiness to it that exudes a confident face peppered with bits of gloss black and red accents and RS badging.

The stellar design extends to the interior, where Honda has gone to work and reshaped every surface of the interior. The City feels more grown-up now than ever before. From its early days, it looked the part of an affordable commuter car. The old models had a lot of black plastic panels in the interior and had a lot of surfaces that were hard to the touch and a bit scratchy. Now, however, that’s changed as the interior is more upscale and the atmosphere is very welcoming. While it may not look like it on paper, the Honda City feels livelier and noticeably peppier while driving even with the CVT automatic that it comes with. On paper, we see that the new City has up to 1 horsepower more. While that not be a lot, peak torque is made slightly earlier and the torque band is beefier than what was on the prior generation with the same displacement.

The primary component that was changed in the engine was the head of the engine. From a single overhead cam (SOHC) head, honda has upgraded this new generation with a dual-overhead-cam (DOHC) head. The result is slightly better performance and better fuel economy in the city. The old model got 6.1 km/L, while the new model gets up to 8.5 km/L in the traffic of Metro Manila. The prior generation of the Honda City only had Bluetooth and AUX connectivity options, but the new generation has a bespoke infotainment system that comes in at 8-inches in size and is much more refined than the old model’s. You pretty much get the same suite of features as the Honda Accord, and you can make the connection that they’re similar systems, possibly a signal to the future of Honda’s infotainment systems.

Because of this infotainment system, you get Android and Apple CarPlay, which means that you can connect your phone to the car and see all your maps and music, and other apps on the screen without having to fiddle around with your phone. Honda may not say it, but this is a safety feature that should be standard on all modern cars moving forward. In the subcompact sedan segment, you don’t normally find a lot of toys for the rear passengers. Usually, the manufacturers are so focused on providing power outlets and aircon vents for the front. In the City, however, Honda has equipped the Honda City with rear vents and not one but two 12-V sockets. Clearly, it is the most equipped rear seat in the market currently, and on top of that, you even get a center armrest. You don't even get rear vents in the 2020 year model of the Honda Civic. In a way, you can even use the Honda City like a compact or midsize sedan, which brings us to our last point. There was a reason why Honda decked out the City with a lot of adornments. The rear is quite spacious. Slightly bigger than the prior generation, the toys for the rear passengers are going to make a lot of sense. You can pretty much sit back and relax at the back of a City, however, a taller or bigger individual might be better off with a Civic or Accord, after all, it is still a subcompact sedan.

On top of that, you get a trunk that is sizeable for the class. Coming in at 519 liters, the cargo area even rivals some crossovers of a similar size.