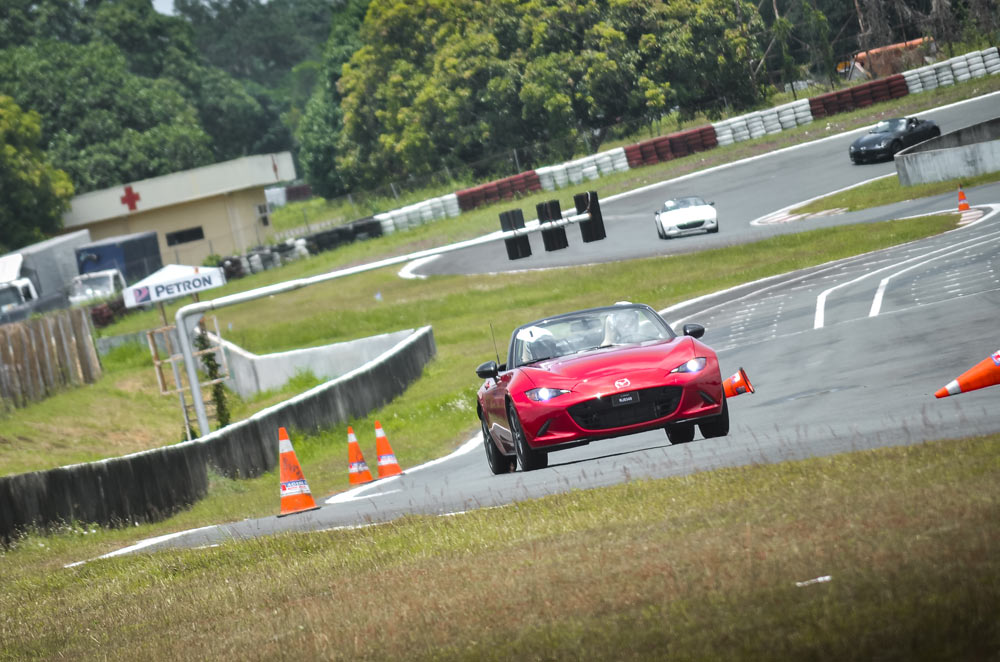 'Jinba Ittai' – a Japanese proverb that translates to 'rider and horse as one”. A mantra Mazda has been preaching since the birth of the SKYACTIV generation models which is epitomized by the 4th generation all-new MX-5. And we got to experience it first hand, on track.

First previewed at the 2015 Manila International Auto Show (MIAS) in April, it took the exclusive local distributor of Mazda, Berjaya Auto Philippines, 4 more months to ship a boatload of Miatas (if we're still allowed to call it that) to our shores. When it did, the MX-5 carried a very reasonable price tag of P1.68-million for the 6-speed manual version, or P1.86-million if you don't want to join the 3-pedal-party.

But before they could be swept away by some very eager customers, 4 of these lightweight roadsters were taken to the Batangas Racing Circuit (BRC). There, us motoring journalists were given the chance to take a deep dive into the Jinba Ittai experience where it mattered the most. Looking at the all-new MX-5, I can't help but compare it to its predecessors. The headlights on this ND model are sleeker and more aggressive, the hood has been lowered, and it's smaller in every direction in relation to the NC. Some clever engineering also allowed Mazda engineers to shed 100 kg off the scales, bringing it back to its roots as  the ultimate lightweight sports car.

Behind the wheel, headroom seemed a bit cramped with a helmet on. But we're quite sure that 99% you won't be driving yours on track. Better yet, fold the top down and enjoy it al fresco.

What took me by surprise though was how snug and relaxed it felt in the cockpit. The low seating position made me feel as if I was part of the car instead of just sitting in it. The pedals were in the optimal position for heel-and-toe downshifts, while the short-throw gear stick and handbrake on the raised center console were right next to the steering wheel. If it felt this good standing still, imagine what it could do on track. 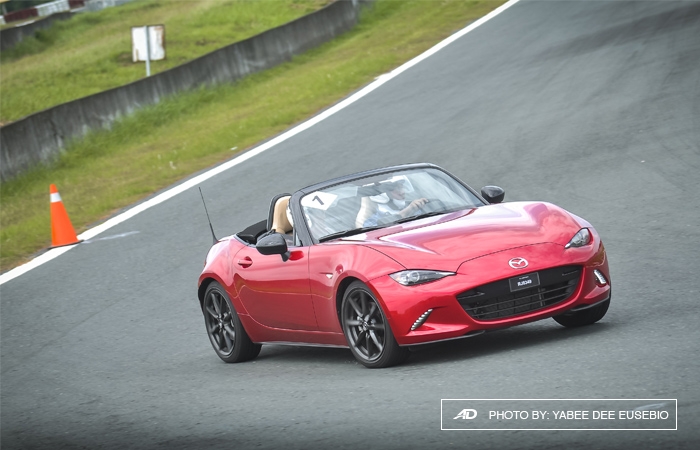 Starting from the pit lane, the 2.0L SKYACTIV-G engine rumbled gently to tease us what it's capable of. It wasn't that loud, but loud enough to get our hearts racing. So when we rolled out onto the main straight, I did what any clever man would do and pushed the gas pedal to the floor. And boy was it nice to hear all the 160 hp and Nm of torque sing!

The 6-speed manual was nice and precise, while the auto slushbox was very responsive when shifting both up and down the gears. Taking corners, the MX-5 felt composed and quickly changed directions, largely contributed by it's near 50/50 front-to-back weight distribution and low weight. Body roll, however, was a bit more than what I expected and made more evident when going through the chicanes.

To be quite honest, the MX-5 is not a quick machine. It doesn't have a lot of hp or fancy gizmos on the drivetrain and suspension to help it go around corners. What Mazda relied on was pure and simple engineering to build the ultimate lightweight sports car. Good chassis balance, low vehicle weight, a responsive engine and transmission, rear-wheel-drive, and an amazing machine to driver connection called 'Jinba Ittai'.

Although we were only given 4 laps to go around the track, I can say that I truly felt one with the MX-5. And the experience made me smile ear-to-ear even if I only drove it for a short while. Imagine what it would be like to own one.