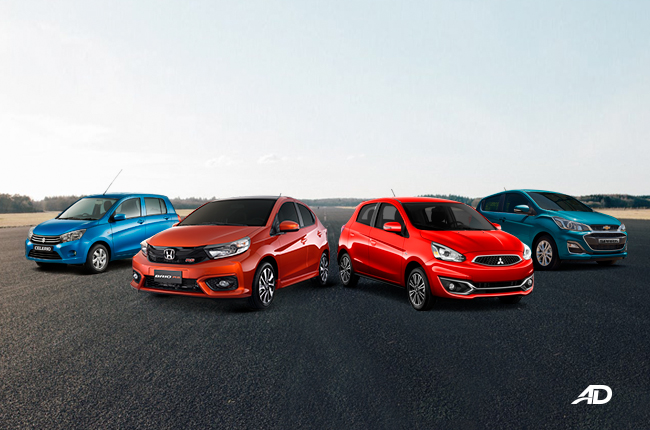 The Toyota Wigo is an easy-to-park hatchback that combines the brand’s bulletproof reputation with a low price point. But if you look around, you can also find other small hatchbacks around its pricing.

The alternatives will be judged on the following criteria. First is pricing; the vehicle has to be at least P100,000 near the price range (P557,000 - 696,000) of the Wigo. Second is safety, contrary to popular belief, the small hatchback actually scores high on the ASEAN New Car Assessment Program (NCAP) crash test getting a 4/5 star rating according to the 2015 report. The third is power, the little hatchback is powered by a 1.0-liter  3-cylinder engine that produces 65 hp and 85 Nm of torque. The engine can either come with a 5-speed manual or 4-speed automatic. Last but not least is features, this covers the head unit, speakers, and whatever else the vehicle has. First on the list is the Honda Brio. For safety, the little Japanese hatchback matches the Wigo with 4/5 stars. But things start to differ when it comes to child safety. The Wigo gets 4-stars in this category while the Brio only gets two. As for the engine, the Wigo gets beat by the small Japanese hatch. The Brio has a 1.2-liter 4-cylinder engine that produces 89 hp and 110 Nm of torque. That’s 24 more hp and 25 Nm of torque more than the small Toyota hatchback. Transmission choices for the Brio are either a 5-speed manual or CVT. Features are about the same for both vehicles with the Honda hatchback coming in with a bigger touchscreen and six speakers in its RS variants – that’s two more speakers than the Wigo. Things are a little bit different with the Chevrolet Spark. It matches the Wigo in terms of adult and child safety according to the 2009 European NCAP. There are no latest test results yet for the ASEAN NCAP. The Golden Bowtie small hatchback actually has the biggest engine in the lineup. It comes in with a huge 1.4-liter 4-cylinder engine that produces 97 hp and 128 Nm of torque – that’s 32hp and 43 Nm of torque more. The 1.4-liter engine can come with either a 5-speed manual or a CVT. On the inside, it has touchscreen infotainment similar to that of the Japanese hatch but with one key feature. It has Android Auto and Apple Car Play capabilities, a step above just having Bluetooth connection and Aux input. Sound is sent via a six-speaker system. Back to another Japanese contender, the Suzuki Celerio. The small Suzuki hatchback scores a 3/5 star rating for the Euro NCAP crash test as of the 2014 report. There are no crash test reports yet for the ASEAN NCAP. While it lacks on the safety front, it is cheaper by P98,000 when you compare the top-of-the-line models. The Celerio is powered by a 1.0L 3-cylinder gasoline engine. It produces 67 hp and 90 Nm of torque. The power figures put it ahead of the Wigo by a marginal amount. The engine of the vehicle can either come with a 5-speed manual or a CVT. It is also shorter than the Wigo by 60mm. On the inside, it has a 7-inch touchscreen with Bluetooth connection and iPod connectivity similar to what you’ll find in the small Toyota hatchback The Mitsubishi Mirage is another alternative to the small Toyota hatchback. For safety, the car does well and gets a 4-star rating in the ASEAN NCAP as of a 2013 crash test. Where it doesn’t do well is in terms of child safety as it gets it got a 43 percent rating. It is powered by a 1.2-liter 3-cylinder engine producing 78 hp and 100 Nm of torque. Like the other options on the list, it can be had with either a 5-speed manual or CVT. Unlike the rest on the list, however, the sole Mirage GLX trim does not come with a touchscreen head unit. It does, however, come with a 2-DIN head unit with iPod, Bluetooth connection, and Aux input.