The local subcompact crossover segment is brimming with feature-rich and budget-friendly vehicles. There are a lot of options in the market, and they can be confusing to sift through. With this in mind, we believe that Chevrolet and Geely have come out with two of the most compelling crossovers we've seen in a while. For this head to head, we put the Tracker against the Coolray. Who takes the crown? 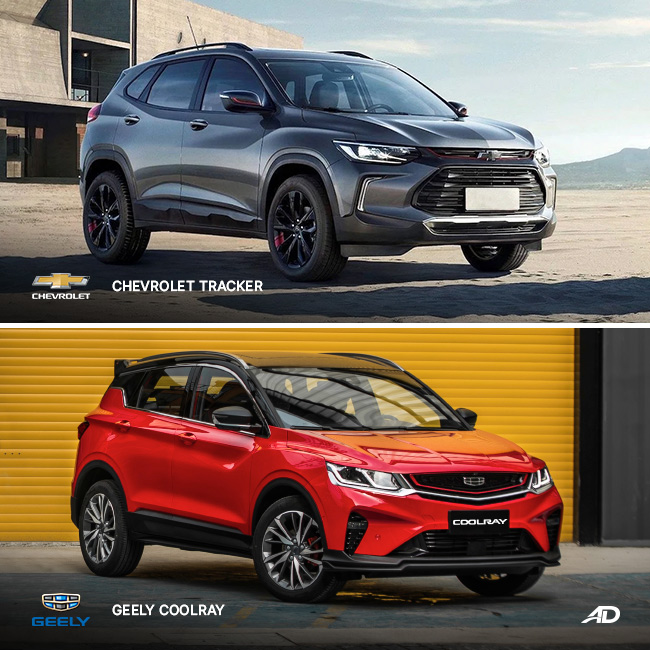 The Chevrolet Tracker features a new design language that's decidedly more modern and dynamic. This crossover features LED projector headlamps and LED taillamps for the top-spec LT Redline variant, while the base-model LS gets halogen lamps. LED daytime running lights (DRLs) are featured for both of its variants. The LT Redline variant also gets a panoramic sunroof and 17-inch alloy wheels with sporty red accents. The Tracker is both longer and taller than the Coolray, which helps the Chevy crossover stand out in its loaded segment.

With the Coolray, things are similarly interesting. Its design is appreciated by many, as evidenced by its strong sales figures. The Coolray looks more intriguing than the Tracker in almost every way, especially when looking at the Chinese automaker’s signature Expanding Cosmos grille. This crossover comes fitted with either halogen or full-LED lighting, depending on the variant. The Coolray rides on 17-inch rims for the base model Comfort, while 18-inch alloys are present for the Premium and Sport variants. The special two-tone body finish and a panoramic sunroof are also exclusive to the Premium and Sport.

While the Tracker doesn't look bad in any way, we think the Coolray has a more eye-catching design. The Tracker is longer and taller, but the Coolray's low and wide stance makes for a car that's easier on the eyes and harder to forget. For this reason, we've awarded the point to the Coolray. 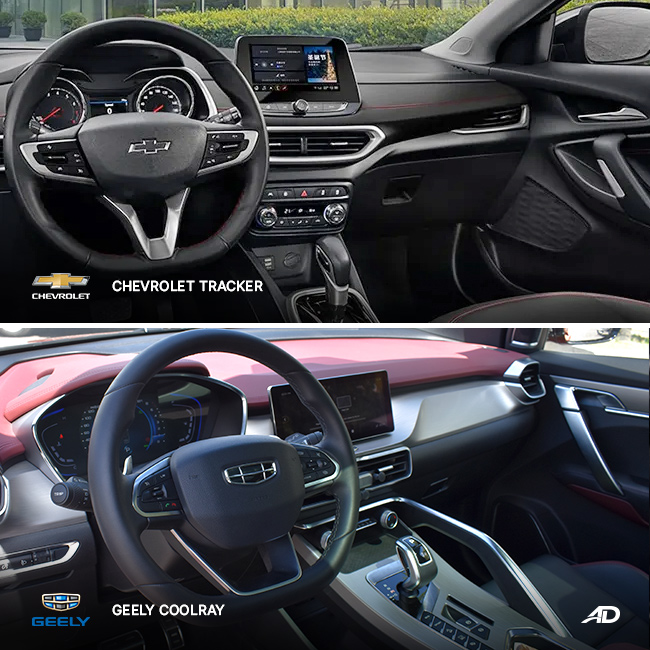 Stepping inside the Tracker, we're immediately greeted by a fresh dashboard layout. Chevrolet has equipped its crossover with a signature Dual Cockpit design. The three-spoke leather steering wheel with audio controls feels premium as well, looking more akin to something you'll find on a Camaro. The Tracker also features power-adjustable driver and passenger bucket seats that add to that sporty and high-end feeling.

Inside the Geely, things look a bit sportier but not any less stylish or premium-looking. The Coolray features a well-designed cabin that shines its focus on the driver's experience. The interior also features plenty of leather versus the heavy plastics inside the Tracker. The dashboard is fitted with a clean-looking digital instrument panel that can display a variety of information. There's also a 10.25-inch infotainment system with Apple CarPlay and Geely's GKUI Smart Ecosystem.

Chevrolet's new interior design language feels like an improvement. The Tracker does have a better range of advanced tech features, but we can't ignore the black plastics lining the interior. The Geely's sportier cabin and onboard tech are stellar, and many drivers will feel right at home driving this crossover. For this reason, the point here goes to the Geely Coolray. 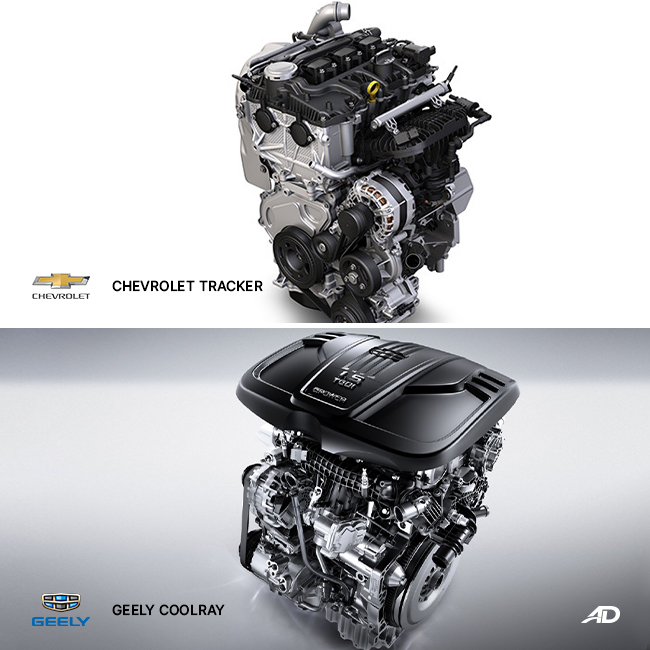 In terms of power, the Chevrolet Tracker features a 1.0-liter, 3-cylinder turbocharged gasoline mill capable of 116 hp and 175 Nm of torque. The engine pairs with a 6-speed automatic gearbox with manual mode.

Meanwhile, the Geely Coolray has a 1.5-liter, 3-cylinder turbo gasoline engine that produces 177 hp and 255 Nm of torque. The engine connects to a 7-speed wet dual-clutch automatic transmission for all variants.

The Coolray blows the Tracker out of the water here with its larger and more powerful engine. For this category, the point goes to the Coolray. 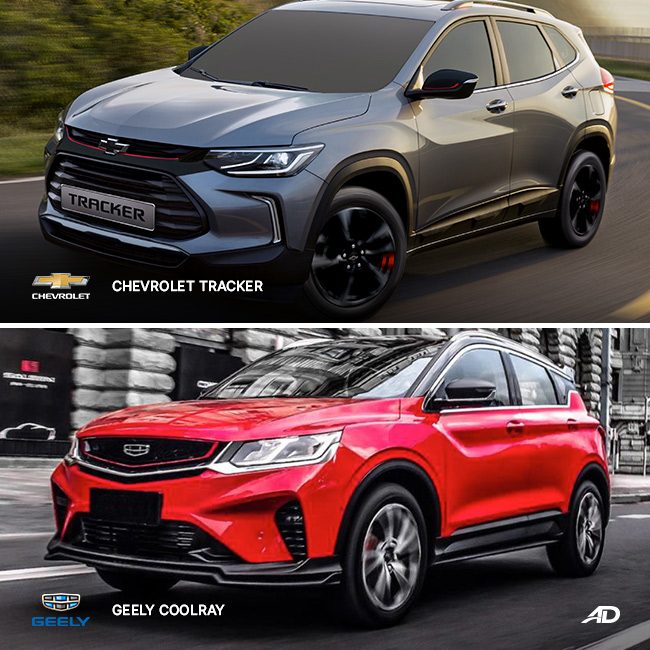 Standard features also include ABS, front and rear parking sensors, a reverse camera, front airbags for the driver and passenger, side and curtain airbags, a tire pressure monitoring system, an anti-theft alarm system, and an engine immobilizer.

As for the Coolray, its safety features are notable as well. These include ABS, front airbags for the driver and passenger, side and curtain airbags, traction control, an electronic parking brake with auto-hold, and blind-spot detection. The Coolray also features a 360-degree camera system with automatic parking.

This category is close, and while Chevrolet offers some attractive driver safety features like its enhanced stability control system, Geely holds its own with useful features like six airbags and 360-degree cameras. Either vehicle doesn't pull ahead significantly, so for this reason, we feel this category deserves a tie. 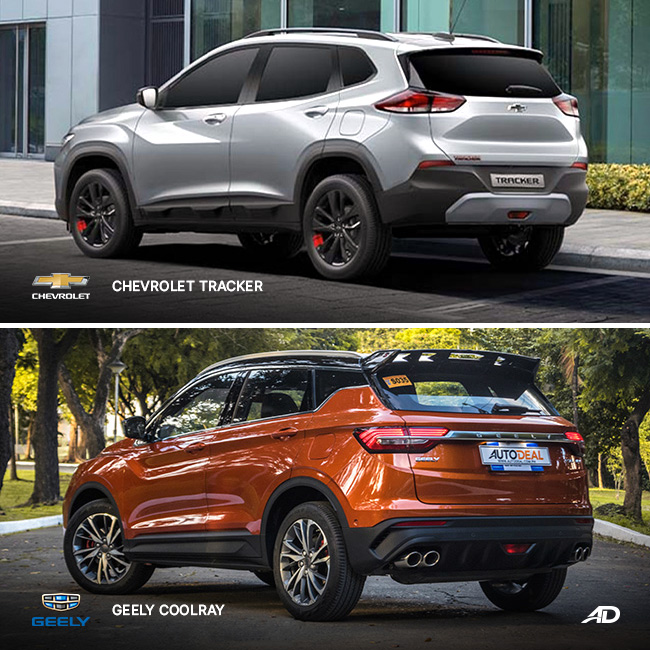 The Chevrolet Tracker has two variants in the Philippines—the base-model LS and the higher-spec LT Redline. The LS is priced at P1,124,888, while the LT Redline variant comes in at P1,242,888.

Whichever way you look at it, the Coolray is more affordable than the Tracker. You can get the base model Coolray for P146,888 less than the Tracker. For the top-spec variants, the difference is P44,888. For this reason, Geely gets the point here for its cheaper price point. 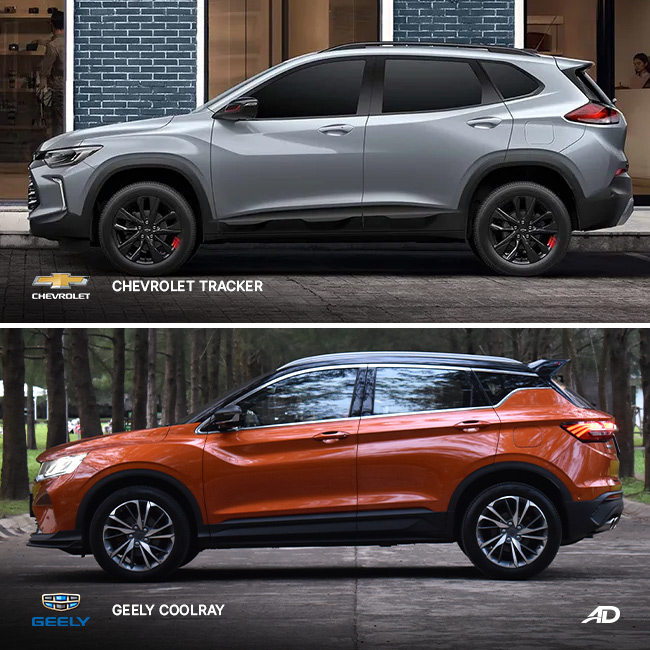 If you're in the market for a crossover that feels a touch more premium in some ways, you can't go wrong with the Chevrolet Tracker. It features that signature Chevy design paired with a host of advanced tech and safety features.

On the other hand, there's the Geely Coolray, which keeps up and even takes over in most of the categories. The Coolray features an attractive interior and exterior, plus it's more affordable and has a more powerful engine.

All in all, the win goes to the Geely Coolray, having taken the exterior, interior, power, and pricing categories. It should be noted that both of these vehicles are viable options for those looking for a modern and feature-packed subcompact crossover. The Tracker's proven engineering will appease many, while the Coolray's budget-friendly price point and competitive features are enough to sway anyone over to its side.