The compact crossover segment has been heating up recently in the Philippines. New additions to the market such as the Geely Coolray and the Ford Territory have left their mark constantly raising the bar for the next crossover to enter the fray and dominate the charts. These two vehicles enter the segment coming in feature-packed and at attractive prices that will surely make a buyer consider purchasing one.

The Geely Coolray first entered the market back in the latter half of 2019 and quickly became a crowd favorite thanks to the features it has and it's the attractive price point. Fast forward to 2020 and a new crossover has come into the market seeking to challenge the established nameplates in the market segment. Enter the 2021 Ford Territory, a crossover from the Blue Oval that challenges all rivals to take a slice out of the crossover pie. It comes to the market loaded with technology, looking to attract budding families with its safety features and attractive price point.

Similar to that of the previous head to heads we will be comparing how these two vehicles stack up based on their spec sheets alone and what they have to offer to the customer. Taking design out of the equation as it can be subjective, we look to the spec sheet to see which vehicle comes out on top. Both vehicles are pretty well equipped as both vehicles come equipped with a full suite of LED lighting elements for the front and rear. The Geely Coolray comes with a projector LED setup while the Ford Territory comes with a quad-LED lighting system.

When it comes to wheel size again both vehicles are pretty evenly matched. Lower variants of both crossovers can be had with 17-inch wheels while the top-of-the-line variants can be had with 18-inch wheels.  However, it is important to note that for the Territory it does come with a 235 mm width tire for its entire lineup that aids the vehicle when it comes to handling. The Coolray on the other hand comes with 215 mm tires for its lower variant and 225 mm for the Sport variant.

For this category we will put it as a tie as the exterior differences between the two are negligible. If you want a bigger more premium looking vehicle at a slightly higher price point then the Ford Territory is for you. However, if you want a compact and sporty-looking vehicle then you can’t go wrong with the Geely Coolray. Moving on to the inside the Geely Coolray presents itself with a rather busy and a bit overwhelming interior at first. Materials inside the cabin are great and come with a European touch. Case in point is the gear shifter which appears to have been taken out of the Volvo parts bin. It's not a bad thing as it helps the vehicle maintain a premium feel. Soft-touch leather is present in the vehicle along with the brushed aluminum finish, and a few bits of hard plastics. If two-tone leather interiors aren’t your thing then you might want to go a variant down from the range-topping Sport model as the interior has a black and red color scheme. It also comes with a 7-inch customizable LCD instrument panel to complement its sporty looks. It is important to note that there are no rear air vents for the rear passengers, something that gives the Territory a slight advantage over its rival.

The Ford Territory, on the other hand, comes with a cleaner look. While it doesn’t have a sporty theme to it, it does come with wood grain accents. You get a large 10-inch display as your gauge cluster and leather seats for all variants. While hard touch plastics are present they’re in places where you would normally touch and add to the durability of the interior. As mentioned previously the Ford Territory does have rear air vents for the passenger, a nifty feature to have especially during the hot summer months in the Philippines.

With that said, for this category, it is another tie as both vehicles have their own merits and it's down to personal preference when it comes to choosing between the two. The Ford Territory brings with it a leather interior and rear air vents as its advantage over the Coolray making it an attractive vehicle to buy. If you don’t mind not having air vents at the rear and don’t mind getting cloth seats for the lower variants then the Coolray presents itself as a value-for-money purchase. The Ford Territory on the other hand comes with Android Auto and Apple CarPlay right out of the factory. This makes it easier for users to connect their phones to the infotainment system and use their applications. The Blue Oval crossover also has two more tricks up its sleeve in the form of a wireless charging pad and an industry first for its segment in the Philippines wireless Apple CarPlay. Sorry Android users but it's the good old cable and USB port for you. 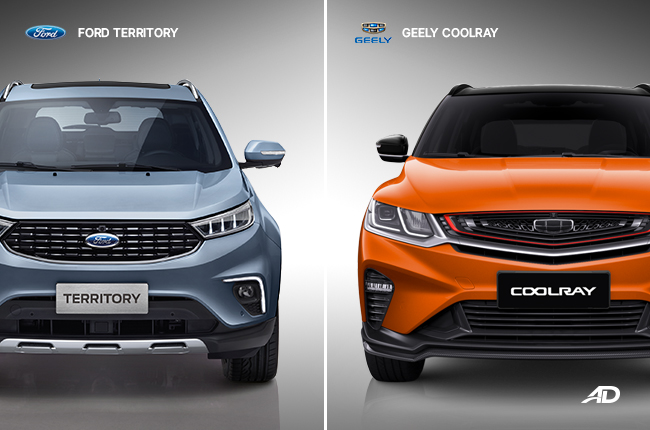 When it comes to safety both come with features that make driving it easy. The Geely comes standard with a full suite of six airbags, ABS with EBD, ISOFIX child seat tethers, five 3-point seatbelts, and a front seatbelt reminder. It also comes with a 360-degree camera along with a blind spot monitoring system and an array of proximity sensors. It also comes with an active park assist feature that will help park the vehicle for you.

The Ford Territory has that and then some. It brings to the table the same kit as the Geely Coolray but adds to it. It comes with autonomous emergency braking, adaptive cruise control with forward-collision warning, lane departure warning, enhanced active park assist system with parallel and perpendicular parking assist, ABS with EBD, stability control, hill launch assist, front and rear parking sensors, and a tire pressure monitoring system. Like its Geely rival, it too has child seat ISOFIX anchorage points for the second row.

For this category, the win goes to the Ford Territory as it comes with a lot of features that will ensure your safety while driving on the road or parking. With the tech behind it, the Territory becomes the easier vehicle to drive thanks to the addition of Ford’s CoPilot system. 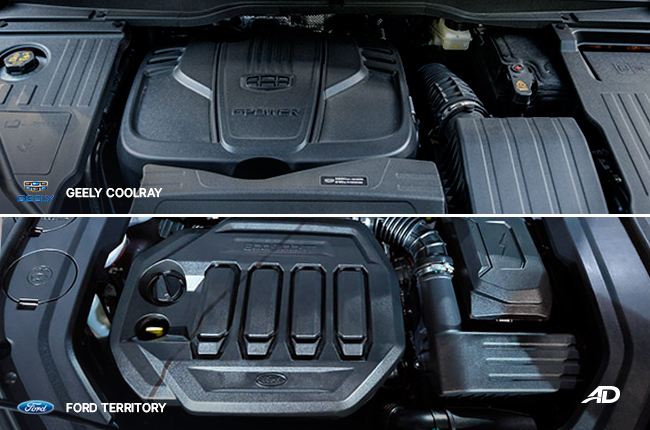 When it comes to power the Geely Coolray has a clear edge. Not only does it come with more horsepower but it also comes with more torque. The 1.5 3-cylinder turbocharged gasoline engine of the Coolray pushes out 177hp and 255 Nm of torque. The Territory, on the other hand, comes with a 1.5-liter 4-cylinder turbocharged gasoline engine that produces 141hp and 225 Nm of torque.

Transmission wise the Coolray comes with a 7-speed wet dual-clutch automatic transmission while the Territory comes with a Continuously Variable Transmission (CVT). While this does limit the Blue Oval crossover when it comes to performance it promises to return this deficit in terms of fuel economy. However, for this category, we will still have to give it to the Geely Coolray as it is making more power and more torque with one less cylinder. As the new kid on the block, the Ford Territory still has a lot to prove, however, it does come with a lot of potential. Where the Blue Oval badged crossover is now is where the Geely Coolray once was in the market. The underdog trying to prove itself against already established nameplates. With that in mind, if you’re looking for a crossover that comes with a lot of safety features then the Ford Territory is your best option.

On the other hand, if you want more horsepower under the hood at a more affordable price point then the Geely Coolray is the one for you. While you don’t get a leather interior for the lower trim-levels and driver aids are a bit limited the value for money factor is very much visible with the Geely crossover.

If you want a little more horsepower under the hood and at a more affordable price point then the Geely Coolray is the one for you. While it does come with limited driver-assist features it more than makes up for it in terms of its value for money proposition.

For its more attractive price point, features, and with the power, it brings for its entire lineup, the Geely Coolray is the overall winner of its head to head. Its value for money proposition is hard to deny as many buyers have chosen the vehicle for their own as its sporty appeal has come into its own. While it might be outgunned in some categories the Geely Coolray still holds its own as one of the crowd favorites in the compact crossover segment.