What’s there to say about the MPV segment other than “impressive.” It’s a jam-packed segment filled with many options and worthy choices. If you want value for money and versatility, many brands have vehicles on offer to meet your need. So, here are two of the contenders in the MPV segment that could be worth your while. If you’re deciding between the two, then here’s an article to make things easier.

We’ll be comparing the Geely Okavango and the Honda BR-V. Because, the BR-V is more affordable than the Okavango at the top of the line, it’s fairer to compare the top-of-the-line BR-V with the base variant of the Okavango. As such the two variants on comparison will be with the Honda BR-V V CVT, and the Okavango 1.5 T Comfort AT. The Okavango is the new kid on the block, and as such, it carries a remarkably unique design paired against its rivals. Boxy yet edgy at the same time, the Okavango features the brand’s trademark expanding cosmos grille along with a LED headlights with DRLs. You also get LED fog lamps which are a nice bonus, along with rear combination taillamps. It looks like the top-of-the-line models, minus a few features, and it looks quite premium for its class. Ground clearance is rated at 194 mm, and you get 17-inch wheels on the Comfort, but 18s once you go up a trim. Overall, it’s a thoroughly pleasing vehicle to look at, and it has the chops to show for it. We’re confused as to why Geely positioned this car as an MPV. It definitely looks more like a crossover-SUV than an MPV. 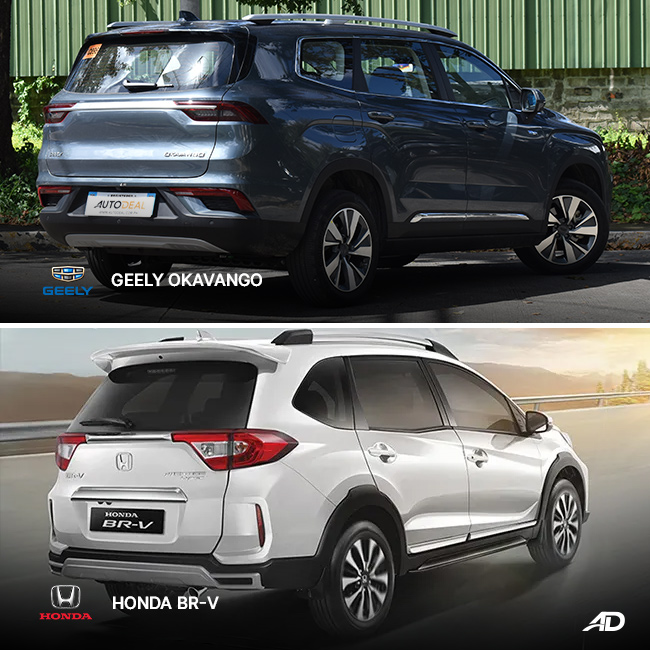 Now, on the BR-V, it’s a much older design, but it got a facelift back in 2019, meaning, it’s not that old. In the metal though, it does well to look like a baby CR-V, and it has quite a bit of kit going for it even as an older option. You’ve got projector halogen headlights with DRL’s and fog lamps, which are just alright in contrast to LEDs. On top of that, you have 16-inch alloy wheels, but even with the smaller set of wheels, you get more ground clearance, which is rated at 201 mm. The exterior dimensions make the BR-V smaller than the Okavango, making it look more MPV than a crossover, but there is also merit in driving a smaller car. So the winner in this category is not super definite as style can be a very subjective topic to handle. If you ask us, however, the Okavango takes the cake. Its exterior lighting is just better, its styling is plain newer, and it has a larger and more imposing stance given its size. That being said, the BR-V doesn’t have enough ground clearance to win this one, and the Okavango gets the win. Geely is known for making high-quality interiors that have a modern aesthetic. We’re used to seeing Geely vehicles with very interesting interiors, and the Okavango, in contrast to Geely’s other models, gets a black and silver theme. The goal was to be more durable, but the execution is far from boring. There is a definite theme and a good serving of detail in the dashboard, seats, and the various touchpoints found throughout the cabin. The middle and rear seats are also unique, as they feature individualized ergonomics. The headroom is great, and the legroom is superb. You may also fold the second and third-row seats down for a flat cargo area. Upholstery is fabric, but upper trims get leather seats.

Meanwhile, the Honda BR-V in its top-of-the-line trim gets black and red leather seats, which is a marked improvement on the pre-facelift BR-V. The interior is also filled with good levels of interior detail, and the red adds a good amount of pop to make the driver feel a bit more special. Rear legroom is adequate, but not extremely generous. The third row is a bit cramped and the passenger seats don’t fold flat like in the Okavango. Minor setbacks, but the BR-V still does well in the design department.

Again, style is definitely subjective. If you were paying around the same price for a vehicle, however, the BR-V does present a good proposition as you already get leather seats and a serviceable amount of space. However, the Okavango simply outshines it in terms of practicality and it matches the interior design quality of the BR-V to a tee. That being said, the Okavango wins the interior round. The Okavango gets a slew of tech that is adapted for today, but it has a few omissions that we wish were included. It’s got screens and digital displays everywhere. The gauge cluster is particularly interesting, as it is a digital display with an LCD screen in the middle. It’s not as advanced as the display found in the Azkarra and the Coolray, but if you want more flash, then head on over to the Okavango Urban + variant. You get a reverse camera as standard but can opt for a 360-degree monitor when you go up a trim, and there are also rear parking sensors as a bonus for all variants. Plus, there is even a keyless entry system with push-button start. Even in its entry-level form, however, the Okavango is quite equipped in the safety department. You get a driver and a front passenger airbag, ABS with EBD, Hill Descent Control, Hill Start Assist, an Engine Immobilizer, tire pressure monitoring, Electronic Stability Contol, and ISOFIX tethers.

The BR-V, on the other hand, has a rather basic tech setup, but it has some key additions that make it slightly better than the Okavango. For starters, the infotainment system might not be huge, but it does have Apple CarPlay and Android Auto, which can display your favorite smartphone apps and mitigate the need for a car mount. A reverse camera is already standard in this variant, but it doesn’t get as many charging points as the Okavango. You also get a keyless entry system with push-start as well as steering wheel audio controls The gauge cluster is also standard, with a digital screen off to the side and analog gauges flank it on the left. We’re not particularly impressed, but it gets the job done and it looks premium enough. Safety is well-covered with dual front airbags, stability control, ABS with EBD, Hill Start Assist, and ISOFIX tethers. This safety kit makes it well-matched to the Okavango.

The reality is, the Okavango is newer and simply has better specifications than the BR-V. You also get the option to pay more and get more if you go up a trim, but that’s beside the point. Even in its entry-level variant, the Okavango is better-equipped and has more features. We only wish that it had Apple CarPlay and Android Auto baked in so it would be a definitive win over the BR-V. That being said, however, if you value smartphone connectivity, the BR-V is definitely worth a look as it still provides a good amount of features. If you wanted power and nothing but power, then the Geely Okavango is for you. Equipped with a 3-cylinder turbocharged motor and a 48-Volt mild hybrid system, the Okavango produces 190 hp and 300 Nm of torque, which is enough to rival some diesel engines in the market. It also has a 7-speed wet dual-clutch transmission (DCT) that may be a little alien to people familiar with traditional automatics. While there is a slight delay in terms of transmission response, we found that it was a smooth unit that didn’t bog so much in traffic thanks to the 48-V mild hybrid system. It was smooth and the engine is capable enough to make you feel like you’re not driving a bigger car.

On the other hand, the BR-V still retains the tried and tested 1.5-liter naturally aspirated engine that is commonly found in Hondas near the P1,000,000 mark. While it’s still not as peppy and lively as the Okavango, it still delivers smooth performance that is made even more apparent by the continuously variable transmission (CVT) it comes with. That being said, it doesn’t win the numbers war with only 118 hp and 145 Nm of torque.

It’s hard to justify the BR-V as it is outclassed by the Okavango’s powertrain. The transmission in the BR-V is better and smoother, but the Okavango has so much ammunition on its spec sheet that it pretty much wins in almost all aspects. However, if you want reliability and something simpler, then the BR-V is definitely a good choice if you’re very wary of technology and the problems that may arise given abuse or enough time. That being said, the Okavango wins this round, even thinking about reliability.

It’s a landslide victory for the Okavango. Geely knows how to play the numbers game, and they know how to design and engineer a car to be something spectacular. What’s most impressive, however, is the price, as the Okavango in its 1.5 T Comfort variant will set you back the only P1,208,000. The price is right for the equipment that it carries, but if you’re already there, you might want to consider upgrading to the Urban or Urban + variants as they come with even more toys and upgrades for you to enjoy.

Honda, it seems, needs to step up their game, but their tried and tested formula stood the test of time and might continue to do so in the future. The BR-V is a testament to the saying “if it ain’t broke, don’t fix it,” but with players like the Okavango, Honda’s replacement to the BR-V might be a head-turner, and a model that can take the Okavango head-on then win. However, don’t worry as the price of the BR-V isn’t that taxing because it only comes in at P1,158,000. It’s a relative bargain for the price, and a good value considering what you get.