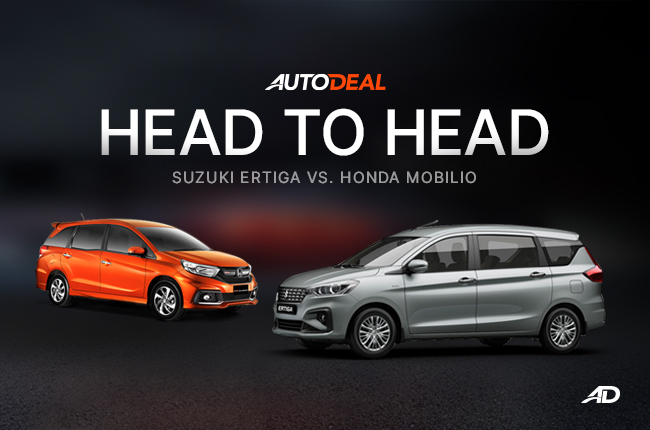 There is no denying that the 7-seater MPV category in the Philippines is like a gladiatorial arena. Big burly men armed with swords, spears, tridents, cestuses, or even bare fists duke it out in for the favor of the crowds. In this case, we don’t have two heavyweights. No these aren’t SUVs, but they are very similar to SUVs. They seat the same amount of people and have ample space for almost anything and everything that your average city-goer would need.

In this segment of Head-to-Head, we pit two worthy contenders against each other, the Honda Mobilio and the Suzuki Ertiga, specifically the range-topping RS and GLX variants, respectively. Two MPVs that can keep up and do quite a few things better than other competitors in its segment, but let’s stay focused here.

It’ll be crazy to incite an MPV war, seeing as they’re a highly sought after item in the Philippine automotive market. Legions of fans will come defend the car that stays with them and their families through thick and thin. So without further adieu, let’s begin. 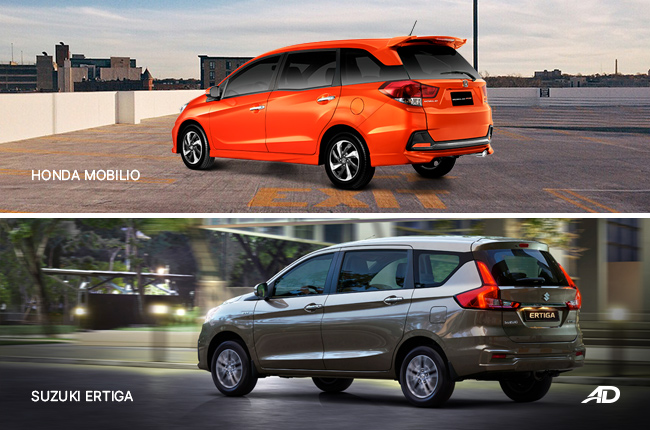 These two MPVs aren’t slouches in the design department. Both sport handsome front ends that may raise a passerby’s eyebrow. Both of the manufacturer’s logos are displayed prominently on the front, seated in stylish grilles. The Ertiga’s front looks more mature and its front facia talks to you, and doesn’t scream. The Mobilio’s, on the other hand, is much more assertive in its appearance. The grille is angular, and the shape of it continues to the headlights.

The main theme of the exterior comparison is that the Mobilio is much more aggressive and young from all angles, while the Ertiga is more subdued and quaint. Suzuki’s MPV evokes style, but does it in a way that isn’t too in your face. Honda shows its flare with a design that is very sporty. One such small touch is the headlight array. The Ertiga comes with a pair of projector headlights, while the Honda only gets a pair of reflector halogens. 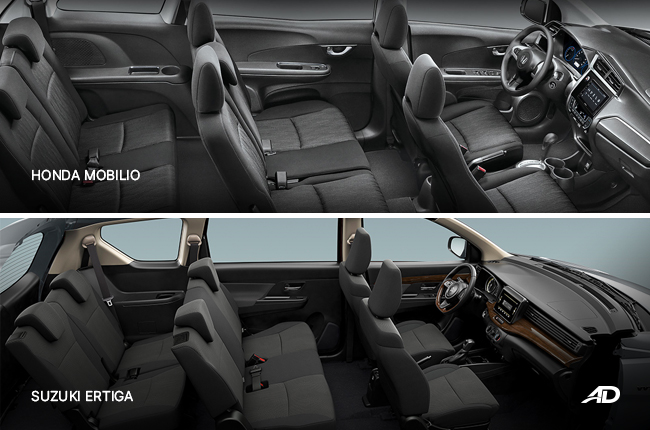 Ascertaining that these two MPVs have different personalities can be done with a quick walk around the exterior, but the divide become apparent when you step inside the cabin of each unit. The Honda has black and grey tattered all over it. The dashboard is angled and features hard lines that look rather handsome. Meanwhile, in the Suzuki, the Ertiga may give you a mean look on the outside, but on the inside, it’s a big softie. It’s dash is flowy with very straightforward lines. The beige and brown color scheme make this cabin a very inviting space to be in, since it looks warmer on the eyes rather than edgy like the Honda – literally.

Whether you go with warm and inviting or edgy and utilitarian is completely up to you. While warm-looking, the cabin of the Ertiga uses light colored cloths and materials. Great looking when new, not-so-great when junior decides that it is a good time to spill a little something onto your upholstery. The dark colored interior in the Honda will undoubtedly still look fresher than the Ertiga’s after maybe a few odd years of use. Moving over to the infotainment system, and we see that there is a radically bigger unit adorning the center of the Ertiga’s dash. It features prominently unlike the Mobilio’s, which is integrated into its own panel. Both units feature the same connectivity options like Bluetooth, but other than the design, there is a difference in the size of the actual screen. If you opt for the top of the line variant of the Mobilio, you get a 7-inch touch screen that nestles in the center, but if you get the top of the line variant of the Ertiga, you get a full 9.7-inches of screen real estate. Even at its baser trims you do get a head unit that is bigger than the Mobilio’s at 8-inches.

You do, however, get a bit more in the Mobilio when you talk about driver aids and other little tech touches for everyday driving. Both MPVs share almost the same features for safety, both sport driver and passenger airbags, anti-lock brakes with electronic brakeforce distribution, as well as ISOFIX tethers for child seats. Where the Honda gets a leg up with the presence of stability control systems in place, and the speed sensing door locks. On top of the driver’s assists, you get a keyless entry system for the Honda when you opt for the top-of-the-line trim. Both engines sport the same displacement, but these are not going to run rings around any other car. The Mobilio’s 1.5L puts out 120hp and 145 Nm of torque, while the Ertiga pushes 103 hp, and 138 Nm of torque. Which one is higher? The Mobilio’s. Does it make a difference? Yes. Does straight line acceleration matter in these MPV’s? No, not really. Both engines can deliver respectable performance, but it won’t push you to the back of your seat.

Whereas the displacement is the same, the transmissions are not. The Mobilio uses the CVT of Honda to deliver better fuel economy figures. The Ertiga on the other hand uses a traditional 4-speed automatic. Both get the job done, but it’s not smooth in the Ertiga seeing as CVTs have no gears to switch between.

The Honda Mobilio starts at P884,000, while the Suzuki Ertiga starts at P728,000. The top-of-the-line Mobilio RS, though, is priced at P1,071,000, while the Ertiga doesn’t even touch seven digits and goes for P988,000 in the top GLX variant. Both units have manual transmissions available in their base trims, but the Mobilio in its base form costs just a hair under the price of the simplest Ertiga variant with an automatic. At P884,000 for the manual transmission, it would make sense to get an automatic with an extra P4,000, since the Ertiga costs P888,000 for the GL variant.

Overall, the Mobilio and Ertiga are two very different cars with different personalities. While the Honda focuses on sporty characteristics, the Suzuki is more tame and subdued. It all depends on what you are looking for and what your budget is. The Ertiga undercuts the Mobilio by quite a few thousands, but the Honda offers more power, a better transmission and several driving assists for hairy situations. The Ertiga, on the other hand, offers great value for money, a welcoming interior in beige, and subdued styling. Can’t go wrong with either though, but we cannot deny that the Ertiga looks like a good steal compared to the aging Mobilio.