These days, there seems to be an unlimited number of options when it comes to subcompact crossovers. We have offerings from the world's most established brands as well as from newer automakers. It's a free-for-all now, and the most captivating vehicles in this segment are those that are feature-packed, stylish, and affordable.

To this end, Kia's newest crossover, the Stonic, is primed to make waves in the local scene. Meanwhile, the MG ZS has been in the market since 2018. While its sales have been steady, Kia could be stepping in to rain on someone's parade. Can Kia disrupt MG's momentum in the segment? Starting with the Stonic, it's clear that Kia has a pulse for what the people want design-wise. The Stonic looks both modern and sporty, all while retaining the brand's signature looks. Kia's tiger-nose grille is present here, which looks great, but it's surrounded by halogen headlamps and fog lamps. There are LED DRLs, though, so that's a plus.

The Stonic gets stylish front and rear bumpers, a roof rail, and rather thick black cladding all around the vehicle. The rear gets a pair of sharp combination taillamps, an integrated rear spoiler, and a shark's fin antenna. Kia put a black roof on the top-spec model, evoking a two-tone finish. 16-inch alloy wheels complete the Stonic's package.

Whereas the Stonic looks refreshing and fashionable, the MG looks much more serious with its traditional, almost dated design. It's not ugly by any means, but the ZS seems out of place next to the Stonic.

The front of the ZS features MG's signature Stardust grille, paired with London Eye halogen headlamps and front fog lamps. The side looks simple, with character lines running straight across the vehicle. Polaris taillights are featured over at the rear, completed by a spoiler and bumper that don't look half bad. The MG ZS sits on either 16 or 17-inch alloys, depending on the variant.

It's worth mentioning that the MG ZS is longer, wider, and taller than the Stonic. So those looking for a beefier crossover may have to consider this. Despite the size difference, we think the Kia Stonic has the better overall design. Sure, it's more compact, but it's also a knockout. The modern styling, the two-tone finish, and the capable stance ensure the Stonic stands out wherever you take it. 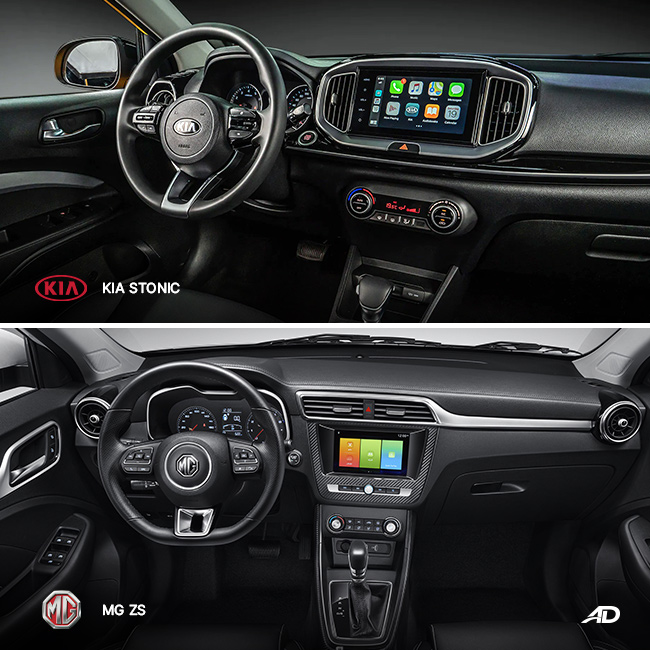 While the Stonic looks stunning on the outside, the same can't be said on the inside. There are lots of hard plastics here, and everything looks plain. At its price point, it's somewhat understandable. We only wish Kia put in some more effort in sprucing up the interior.

The saving grace could be the infotainment system, which is an 8-inch touchscreen display. The system gets Apple CarPlay and Android Auto, plus Bluetooth and USB connectivity. It connects to four speakers with two tweeters for all variants.

Elsewhere, the driver is treated to a 3.5-inch TFT LCD panel nestled between analog gauges. The steering wheel is a 3-spoke polyurethane, but it gets steering wheel controls. Keyless entry is available but limited to the top-spec 1.4 EX AT variant. There's also a rear camera with dynamic display guidelines, though you'll have to pony up for the rear parking sensors, as it's only on the top model.

For the MG ZS, things are a little better inside. There's a lot of hard plastics in here too, although it's done with more variety and spice. The dashboard features stitched faux leather with silver accents, as do the side door panels. Right in the middle, the crown jewel is an 8-inch touchscreen display housed in faux carbon fiber. The screen sits pretty deep inside, but you forget about all that when you have Apple CarPlay on the AT Alpha variant. Slide one trim level lower and you get a 6.4-inch display with Android Auto on the AT Style Plus model. There are either four or six speakers available, depending on the variant.

The higher ZS models get leather-style upholstery, with the base model getting fabric instead. The top-spec ZS also gets a sporty, flat-bottom steering wheel with audio controls. As for other tech features, the higher trims enjoy cruise control, electronic climate control, and heated mirrors. A reverse camera and rear parking sensors are available for the higher models. For the AT Alpha variant, there's a panoramic sunroof.

Who wins this category? While MG's lack of standard features can be annoying, the higher variants are more compelling than the Kia Stonic. The Stonic's cabin is quite bare compared to the ZS, although it does get the job done with more standard features and a better infotainment system. For this reason, we feel this one's a tie. Moving on to power, the Kia Stonic features a 1.4-liter, four-cylinder engine that produces 96 hp for the lone manual model and 100 hp for the automatic variants. In all cases, the Stonic is capable of 132 Nm of torque. The power plant connects to either a 5-speed manual or 6-speed automatic transmission.

Meanwhile, the MG ZS packs a 1.5-liter, four-cylinder mill capable of 114 hp and 140 Nm of torque. The engine pairs with either a 5-speed manual or a 4-speed automatic gearbox with a manual Tiptronic function.

It looks like the Stonic is outmatched here, as the ZS gets the best of it in terms of raw power figures. The ZS is larger, so it benefits from a more powerful motor. The numbers don't lie, however, so this category has to go to the MG ZS. Safety is a big question for many crossover buyers in the Philippines, so let's see how these two vehicles fare in this department.

The ZS is a bit more generous in terms of safety features. There are standard front airbags, with side and curtain airbags on the top trim level. Other standard features include ABS, electronic brakeforce distribution, cornering brake control, ISOFIX child anchors, child locks, an alarm system, and an engine immobilizer.

Putting the spec sheet side by side, it's clear that the MG ZS offers more in terms of safety. The advanced active features are compelling. So, what do the experts say? The Kia Stonic scored five stars in the European NCAP, while the ZS received five stars from the ASEAN NCAP. Kia didn't scrimp on the Stonic's chassis, but MG's features put the ZS over the top. As you can see, the Stonic is more accessible, being P83,888 cheaper than the entry-level ZS. For the top variant, the difference is P73,888. We think MG's advanced features are worth the extra money, but in terms of pure pricing, we have to give it to the Kia Stonic. It's been quite the battle, and both subcompact crossovers bring attractive features to the table. The Stonic looks more handsome with its compact form and modern design, while the ZS is larger and boasts a better-looking interior with more tech features. The Stonic is more affordable overall, but the ZS gets a slew of useful safety features.

Which one should you get? It depends on your priority. If you're looking for an affordable and good-looking crossover, the Stonic is for you. If you're in the market for a steady vehicle with all the creature comforts, the ZS might be worth looking at. Whichever one you choose, you can't go wrong with either option. For this reason, this Head to Head is a tie between the Kia Stonic and the MG ZS.