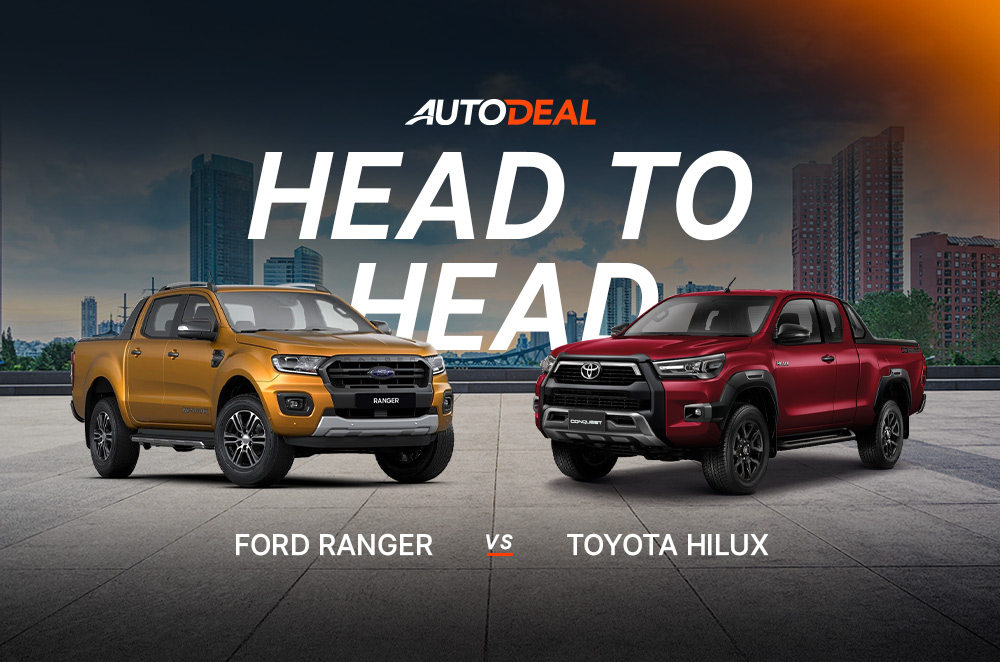 The pickup truck segment in the Philippines is slowly heating up as established models are slowly getting upgrades. One such duo recently got upgrades in the form of the Toyota Hilux with its refreshed looks and upgraded engine, and the Ford Ranger, which also got a few new features added to the vehicle. With that said we created a head-to-head to see which pickup truck based on their spec sheet alone comes out on top and is worthy of your hard-earned money. Both the Ford Ranger and Toyota Hilux follow the typical pickup truck look. They both have a rough and tough design on the outside that complements their intended purpose of being an off-road-ready cargo hauler. A similar story can be said for each pickup’s respective lighting elements. The Ranger comes with a progressive lineup of lights as the entry-level comes with multi-reflectors, the middle variants come with projector halogens, and the range-topping model comes with LEDs. The Hilux, on the other hand, comes with multi-reflectors for its lower variants and Bi-Beam LEDs for its higher-tier models. There is a slight disparity between the middle models as the Toyota pickup already comes with LED lighting elements.

Lighting and design elements aside, where it really matters the Ford Ranger delivers. If you’re in the market for a pickup truck, payload capacity is one of the key criteria you should consider especially if you want a top of the line variant. However, the Ranger is an older model compared to its Japanese counterpart and as such we have to take a few points back from it. 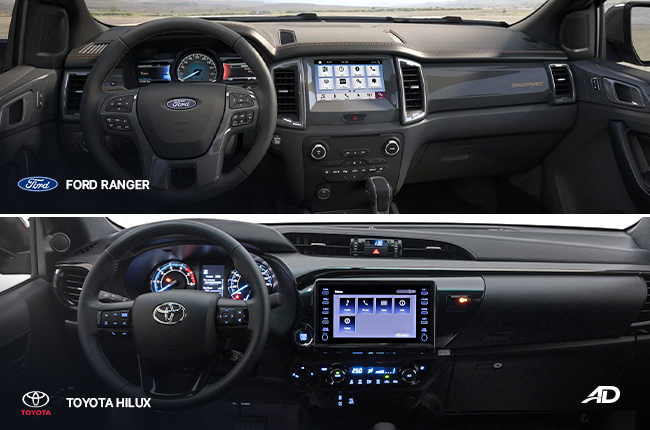 Cabin-wise both vehicles are on a similar playing field. They come with durable materials that still give off a premium feel. Both share a boxy layout with a large infotainment system in the middle. While the Hilux comes with two analog gauges, the Ranger features a single analog gauge flanked on either side by digital displays. This is where the Ranger has a slight edge over its Japanese rival when it comes to its customizability.

As far as infotainment systems are concerned both are on a level playing field as these pickup trucks also come with Apple CarPlay and Android Auto as standard for their regular lineup. It is important to remember, however, that the Hilux does come with a smaller touchscreen for its lower variants, while the Ranger features an 8-inch infotainment system across the board.

Seat Material-wise the Ranger has the edge as it has variants that come with leather seats. The Hilux, on the other hand, has gone with a more utilitarian route and has stuck with fabric as its only option across the lineup. While utilitarian, it still gives off a premium feel despite it not being leather. When it comes to seat adjustability the Ranger also has another advantage as it has a power-adjustability option for its higher trim models. The Hilux, on the other hand, does not come with this feature even for its Conquest trim level. 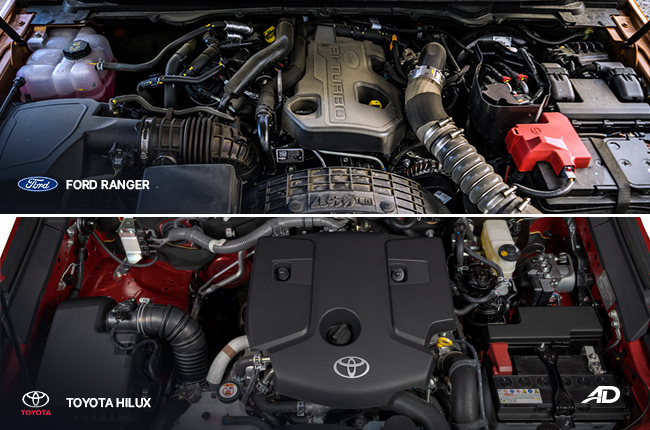 When it comes to power under the hood, both pickup trucks are pretty close. However, the Ford Ranger comes out on top as it has three engine options to choose from, with each one bringing more power to the segment. For its entry-level variants, the Blue Oval badged pickup truck comes with a 2.2-liter turbo diesel engine that pushes out 158hp and 385 Nm of torque. For its middle-tier variants, the Range comes with a 2.0-liter single turbo engine that makes 178hp and 420 Nm of torque. Finally, for its range-topping model, it comes equipped with a 2.0-liter Biturbo engine that produces 210hp and 500 Nm of torque.

The Toyota Hilux, on the other hand, only comes available with two turbo diesel engines, a 2.4-liter and a 2.8-liter option. The 2.4-liter makes 148hp and 400 Nm of torque, while the bigger 2.8-liter that is reserved for the highest trim level makes 201hp and 500 Nm of torque.

While the Ranger loses out in torque for its entry-level model it does come with an advantage when it comes to horsepower. The same can be said for its 2.0-liter single turbo variants that push out more power than Toyota’s 2.4-liter model which is also fitted to its mid-tier variants. Moving on to the highest trim level models, and both models for the Hilux and Ranger are on equal footing when it comes to torque, however, the Toyota is gapped when it comes to horsepower as it comes with 9hp less. However, it is important to note that the Japanese pickup’s torque comes in earlier at 1,600 rpm while its American rival comes in at 1,750 RPM. That said, however, the win goes to the Ranger for having more power for its middle and higher trim levels. 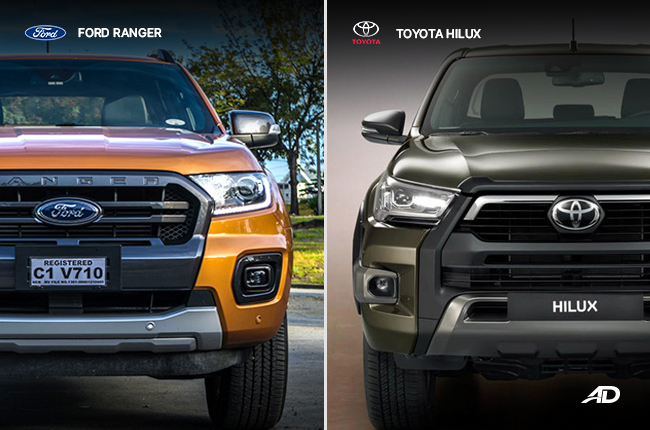 Where safety comes into play neither vehicle is a slouch as even their entry-level models come well equipped. In the case of the Ranger, its variants from entry-level all the way to the middle tier come equipped with driver and passenger airbags along with the standard kit of ABS with EB, cruise control, and ISOFIX tethers.

The Hilux, on the other hand, comes with three airbags as standard, two for the driver and their knees, plus one for the front passenger. The Japanese pickup truck also comes with a better standard kit in the form of ABS with EBD and brake assist, vehicle stability control, and hill start assist control for all of its variants. Rearview camera options are also available for both models, however, these are relegated to the higher trim levels.

While the Hilux comes with a slight advantage when it comes to safety for its lower models when comparing the higher trim levels both vehicles are pretty evenly matched. The Ranger comes with driver-assist features such as pre-collision assist with pedestrian detection, lane-keeping aid, driver alert system, adaptive cruise control, and auto high beam control.

The Japanese pickup truck, on the other hand, features 7 airbags for its higher models along with downhill assist control, two front sonar sensors at the front, and four sonar sensors at the rear. Where it counts, both pickup trucks deliver in their own unique way, the Ranger doubles down with passive crash protection thanks to its driver aids, while the Hilux steps up its game when it comes to active protection thanks to having 7-airbags available in its Conquest trim. For this category, we will mark it as a tie since both pickup trucks come with their own merits. 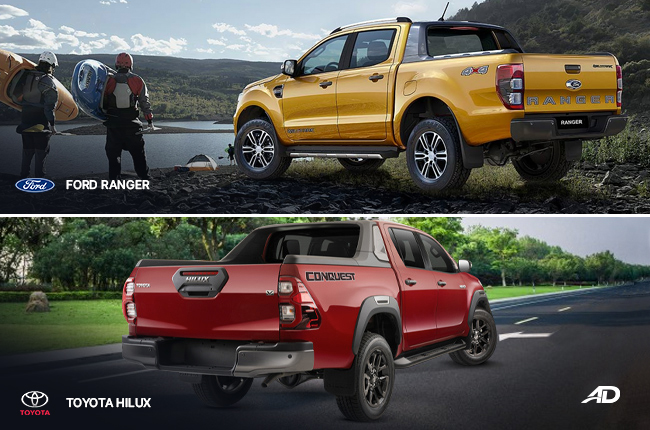 Pricing a key determining factor to see which pickup truck is not only the more affordable vehicle but also to see which one is the most value-packed. A quick look at the Toyota Hilux price list reveals that it is the more affordable vehicle to acquire as it can be had for below P1 million. However, this is for the J variant that is bare when it comes to features. If you opt for the more well-equipped E variant then its price point starts at P1,113,000 which makes it more expensive than its Ranger counterpart. It is also important to note that the Hilux Conquest 4x4 is priced at the P1.8 million mark which makes it more expensive than its American counterpart by about P150,000.

While the Ranger does come with a more affordable pricing scheme, we cannot deny that the Hilux is more versatile when it comes to variant choices. For those who want fleet vehicles or something not too technologically advanced and can take a beating and still keep on kicking, then the Hilux is an ideal choice. For this category, we give it as a tie. While we can’t deny the near-legendary capabilities of the Toyota Hilux and the reputability of the Japanese brand behind it, based on specs alone the Ford Ranger still wins. It offers you a lot more features and more power options at a more affordable price point compared to that of its Toyota rival. Features are plentiful especially in the higher trim variants that offer you active and passive vehicle protection. These not only make the vehicle easier to drive but safer as well. For this head to head the win goes to the Ford Ranger based on what the spec sheet indicates and on its more balanced pricing for what the vehicle can offer.