The subcompact sedan segment is home to some of the most affordable vehicles in the Philippines. Perhaps the best known among them is the Toyota Vios—an enduring model that has become a mainstay on local roads since the early 2000s.

Over the years, many brands have tried to replicate what the Vios did for our market, to varying degrees of success. The latest to challenge Toyota is Changan, an upstart automaker that boasts the Alsvin in its lineup. Could the Changan Alsvin pose a threat to the Vios with its stylish looks, capable engine, and attractive feature set? 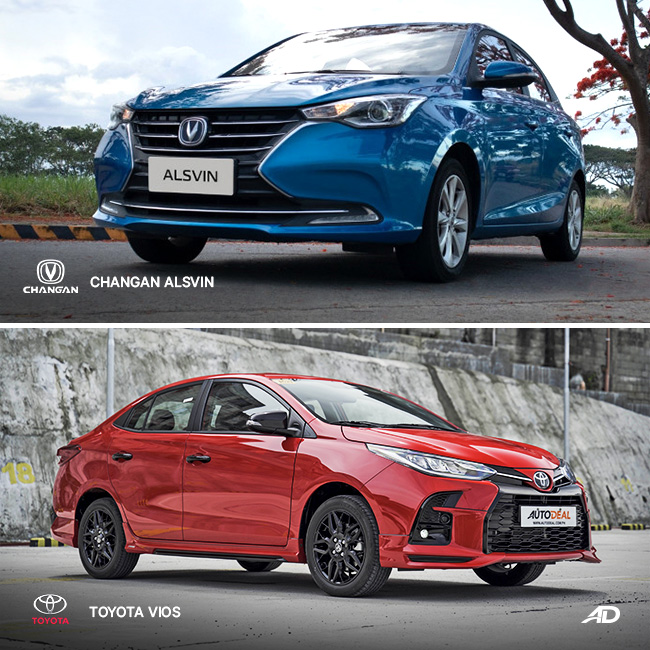 At this point, no one is mistaking the third-generation Toyota Vios for a unique-looking vehicle. While Toyota has done much to improve the subcompact sedan’s exterior appearance, its sheer ubiquity in the Philippines gives it a disadvantage in style. That’s not to say the Vios is not well-equipped, however.

Depending on the variant, you may get either halogen or LED lighting. On the top-spec G model, you’ll find 3-tier LED headlights, LED daytime running lights (DRLs), LED rear combination lamps, and integrated turn signals. Wheel size goes from 14-inch rims on the base model to 16-inch alloys on the top trim level.

Meanwhile, the Changan Alsvin aims to take the reins from the Vios with a streamlined design and competitive features. The Alsvin comes standard with projector halogens, side mirror repeaters, and a shark’s fin antenna. On the Platinum variant, you get LED DRLs, a chrome-finished grille, and even a power sunroof. Wheel options are limited to two: 14-inch or 15-inch rims.

In terms of dimensions, the Vios is longer and wider, but the Alsvin is taller. The Vios also has a larger wheelbase. The Alsvin boasts a larger trunk capacity at 382 liters versus 326 liters on the Vios. Ultimately, we think this category comes down to taste and preference. Although the Vios is better-equipped in the higher variants, the Alsvin does some things better than its competitor. The Toyota Vios features a clean and minimalist cabin that appeals to a large demographic. Its interior design doesn’t offend and is actually impressive in its mixing and matching of materials.

When it comes to equipment, the Vios features either an analog instrument cluster or Optitron gauges, depending on the variant. Infotainment options include a basic 2-DIN audio system and a 7-inch touchscreen display. While Apple CarPlay and Android Auto are absent, there is WebLink connectivity. Both infotainment options feature Bluetooth, USB, and AUX connectivity. Between two and six speakers are available.

More than that, the top-spec Vios comes with paddle shifters, selectable driving modes, push-to-start ignition, and a leather gear shifter. 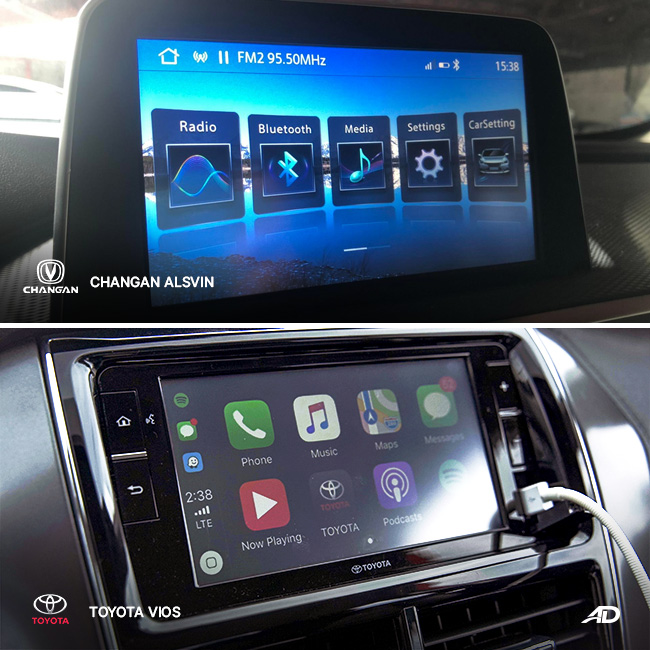 As for the Changan Alsvin, it features a similarly minimalist cabin with its fair share of well-designed elements. The Alsvin adds a touch of sportiness with a flat-bottom steering wheel with button controls. The top-spec variant also benefits from leather upholstery. Other notable interior features include power door locks, a 4-way or 6-way manual adjustable driver’s seat, and a 12V power outlet.

The Alsvin comes with a seven-inch floating-type touchscreen infotainment system with Bluetooth and USB connectivity. This connects to either two or four speakers, depending on the variant. Notably, the top-spec model comes equipped with cruise control—a feature you’d be hard-pressed to find elsewhere at this price range.

While Changan gives us a somewhat new and different cabin with the Alsvin, the Vios has a proven interior with more features on the higher variants. The Toyota Vios wins this category by a relatively thin margin. In general, subcompact sedans are not the way to go if you’re looking for the safest vehicle money can buy. Modern safety features have become a must-have for many car buyers today, and this segment is not exactly brimming with these goodies.

Still, the Toyota Vios escapes scrutiny with a stellar five-star ASEAN NCAP safety rating. Toyota also equipped the Vios with driver and passenger airbags for the base model, with the higher trim levels getting additional side, curtain, and knee airbags.

Meanwhile, the Changan Alsvin has yet to undergo ASEAN NCAP certification. What it does have is a five-star rating on the C-NCAP test, China’s own safety assessment program. Its standard safety features include dual front airbags, ABS with EBD, and a reverse camera. On the Platinum model, you get an electronic stability program, hill-hold control, a reverse camera with auxiliary lines, a blind spot view camera, and three-eye reverse parking sensors.

Both the Vios and Alsvin are considered safe subcompact sedans. While the Vios has more airbags on the higher variants, the Alsvin does have a parking camera, blind spot camera, and parking sensors. We feel this category deserves a tie. The Toyota Vios is available with two engine options: the 1.3-Liter 1NR-FE and 1.5-Liter 2NR-FE, which are both naturally aspirated four-cylinder gasoline mills. The 1.3-liter engine delivers 98 hp with 123 Nm of torque, while the 1.5-liter power plant punches out 105 hp and 140 Nm of torque. The Vios is available in both manual and automatic transmission models.

While the Vios and Alsvin’s respective 1.5-liter engines are fairly equal in terms of power output, we can’t deny Toyota engines tend to deliver superior performance and reliability. Over the long term, it’s safe to bet that a Toyota power plant will outlast most of its competition, and that includes the Alsvin. As two of the more affordable vehicles available in the Philippines, both the Toyota Vios and Changan Alsvin start well below the P1-million peso mark.

For a couple hundred thousand pesos less than the Vios, you can get a top-of-the-line Alsvin with all the features befitting a range-topping model. It’s an attractive deal and one that gives this category to the Alsvin. While the subcompact sedan segment may not be as strong as it once was in the Philippines, it still houses many formidable vehicles. The Vios is one, as it has consistently been one of the hottest-selling vehicles of the past two decades. Due to its near-unbeatable value proposition, the Vios will always have a place in the local market.

The Changan Alsvin, meanwhile, is poised to eat away at Toyota’s market share with a more affordable offering that comes with attractive styling and ample features. If you have the budget, you truly can’t go wrong with either of these vehicles.

With that said, there’s one clear winner here, and it’s the Toyota Vios.