The year 2019 has just started; it’s a new year, and chances are, you’ve still been sticking to your New Year’s Resolutions. That is, if you care about that stuff. If there was ever one thing I’d ask for at the start of this new year, it’s that motorcycling becomes more generally accepted and the walls between car owners and motorcyclists are finally taken down. Wishful thinking, I know, and the fact is that there are countless drivers or riders I see on the road that don’t really point us in the right direction. Road courtesy is almost non-existent in all but the strictest areas and private subdivisions, and in the effort of not trying to pin the blame on a specific road user, it’s extremely hard to deny that majority of accidents and deaths from road mishaps are from the two-wheeled variety.

I’ll be honest with you; I started driving way before I started riding motorcycles, but I’ve been exposed to bouts of rage from both camps. Motorcycling is inherently dangerous; there’s no denying that, and the unpredictability of our roads and lack of discipline from all types of road users has created a challenging and aggressive environment for motorcyclists. So much so, that some things have not been kept in check, and bad habits have been tolerated and allowed to fester.

In this article, we’ll be talking about how motorcyclists should be riding, maximizing personal safety, minimizing interference with other road users, and learning new skills along the way. Motorcycling can be extremely rewarding and liberating, and there are numerous ways to make it safer and more enjoyable for everyone. 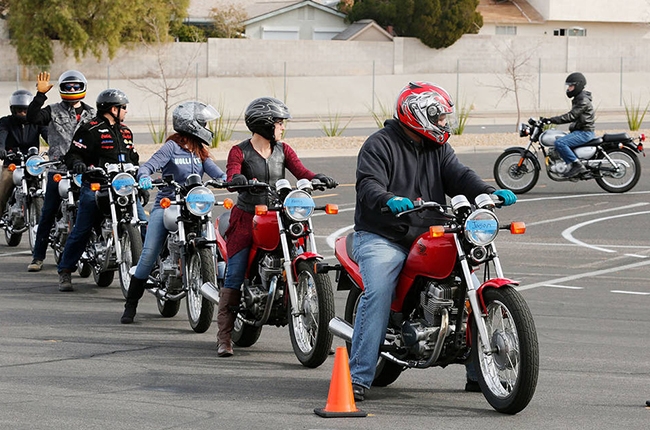 To many, the moment you get your license with a motorcycle restriction means you pass LTO standards for riding, and you’re all set to handle anything. Wrong. To the LTO’s credit, they’ve been clamping down on people getting their hands on licenses without taking tests, and I’m willing to bet that the majority of riders you see on the road lack any form of training. Lessons from your brother, father, or mentor are fine, but you end up learning things that might be wrong and pick up on habits that are downright dangerous.

Your best bet is to take formal lessons from riding schools such as the Honda Safety and Driving Center, as they have formalized curriculums and classes that can scale to your level of riding experience. I’ve known people with zero riding experience take their classes and end up wanting to get on a motorcycle or scooter right away, which means that their approach to safety is encouraging; creating a mindset of positivity and sharing on the road. Isn’t that something we should’ve learned when we were younger? In any case, a refresher course is also a good idea for veteran motorcyclists, who may have developed questionable riding techniques or have forgotten about a few safety pointers. You’ll be surprised what a day or two of instruction can do for your riding. Choosing a helmet should be a no-brainer, and from a safety point of view, it makes perfect sense. Why people are worried about their hair or how their makeup will look after riding is beyond me, since your skull hitting the ground at any speed negates any affect your good looks will have at the end of the day. A quality jacket with armor is also a requirement; you want to protect your arms, elbows, and shoulders from any impacts from the ground. Riding jeans or pants are also a plus, as they protect your knees and ankles in case your ride doesn’t go your way. Closed shoes or a proper riding boot protect your toes and give proper grip on the pegs and the road when at a stop.

The above equipment should be mandatory in every ride and will help minimize injury in the event of a mishap. You’ll be protecting yourself, and others will see you as someone who takes safety seriously. Motorcyclists are entitled to full use of their lane, just like any other motorized vehicle on our roads. Unfortunately, that’s almost never the case, as bigger vehicles are known to not care about motorcycles or fail to see them in their mirrors, to begin with. The key to surviving is to ride as defensively as possible. Never position yourself too close to the vehicle you are following, and never stay in a vehicle’s blind spot for too long. Stay to the leftmost or rightmost part of the lane, maximizing your visibility when drivers and other riders check their mirrors, as the middle lane can be slippery from oil and liquids from other vehicles.

Adjust your position as road conditions change, making full use of the width of the lane to avoid potholes, slippery lane markings, and iffy drivers. Remember, your riding safety is in your hands alone, and your well-being should not be entrusted to other road users. Also make sure that your headlights are on at all times (yes, even during daytime), increasing your visibility greatly.

Related: 6 safety tips when riding a motorcycle according to MDPPA Always make sure that you can react to changes in traffic and vehicles with enough time and consideration for others. Brake early and learn how to judge proper following distance, while still maintaining awareness about your surroundings. Always have an escape plan, ready to brake hard, change lanes, or accelerate away from danger at all times.

This may sound like a lot of work to do while riding, but it’ll become second nature in no time. Also, keep an eye on your speed; you don’t want to be going too fast for the conditions or going quicker than reasonably expected by other road users; this is where problems and accidents will always occur.

Filter and Split Lanes with Care Let’s get this out of the way as this is a very controversial topic for car owners. Filtering is the act of passing stopped vehicles in traffic, lane splitting is the act of passing in between moving vehicles. Filtering should only be done when there is enough space between stopped vehicles and must be done at a slow speed in anticipation for pedestrians and crossing traffic. You must never filter on the opposite lane of traffic unless it is clear and lane markings allow you to do so. Broken lines, yes. Solid lines, no. Move back to your proper lane if a vehicle is coming in the opposite direction, they are not obligated to give you space.

Lane splitting is even trickier as it requires a lot of riding experience as the margin for error is very low. As a general rule, lane splitting should never be done in fast-moving traffic. My ideal range for lane splitting is anything below 60 km/h, and only as road width allows; you may fit, but you don’t want to startle drivers as you pass. This is generally safer to do on multiple lane highways such as SLEX and NLEX, where drivers routinely see and look out for motorcycles. The key is to accelerating past the vehicles as efficiently and as quickly as it is safe to do so while keeping disturbance to them at a minimum. Some drivers may give you space, so make sure to thank them for that with a wave or a nod as you pass.

In both filtering and lane splitting, never perform these maneuvers next to a curb or intersection. Both filtering and lane splitting have been slowly gaining traction as generally accepted motorcycling practices around the world, recognizing the efficiency and high mobility that motorcycles provide. Plus, that’s one less slot occupied in traffic, and one less person taking their car on the road.