Ford’s Ranger Raptor Arabian in Mui Ne media drive in Vietnam took us to the mountains of Doi Co Hong in Dalat where we tested out what beefed-up pickup could do. The media drive took us to an offroad course where we had time to spend with the tough truck. The course came in a 7-station format with each featuring dirt roads, loose surfaces, and even angled terrain. Each part of the course was designed to showcase what the Ranger Raptor could do, with its Fox suspension, and Terrain Management System. The first station tested the vehicle's Hill Descent Control (HDC). We all turned on the mode and let the vehicle crawl down a 20 degree angled slope. While it may seem daunting not to touch the brakes when going downhill the Ranger Raptor's HDC system handled it with ease as all we had to do was steer the vehicle. The test showcased how the pickup truck could handle a steep decline as well as how easy it is to drive the truck. In this scenario, it was a case of set it and steer it. The second station tested out the Ranger Raptor's suspension articulation. Having all four wheels on the ground makes for maximum grip and the pickup truck was able to handle it with ease. Even with the uneven terrain, the tires thanks to the Fox suspension were all firmly on the ground. Driving over the obstacles wasn't a problem either thanks to the pickup truck's low-end torque. Just a bit of throttle and it just crawled right over it without a sweat. The third station was a combination of the previous two but this time we needed to lock the rear differential. This wasn't only a test of the vehicle's hill descent control, it was also a test of driver's nerves as the urge to hit the brakes was very real. But trusting in the electronics proved to be the right choice as the driver would always remain in control no matter what.

The course was small and featured a 15-degree slope which would end in a 17-degree climb. Here 4-Low would come in handy as maximum grip was needed to climb up the hill. The Ranger Raptor was able to handle this station easily without the need for too much throttle. The grip was always present and so was driver confidence when we all piloted the pickup through the course. 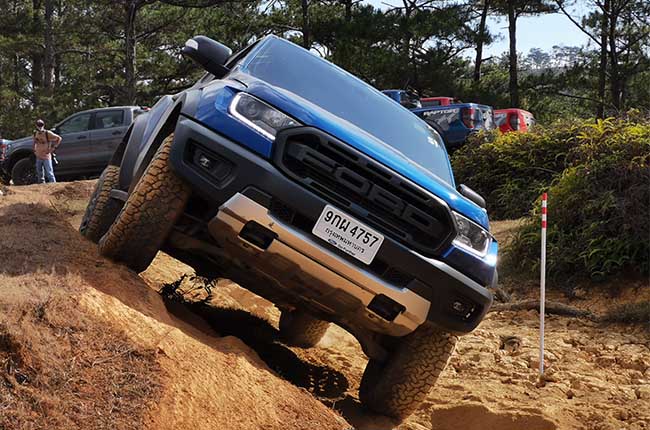 Station four built upon what station two started and upped the game. This time it wasn't just a test of grip and suspension, it was also a test of bravery for the driver. as the Ranger Raptor was put through awkward angles making it seem like it would tip over. Being in the driver's seat you would have to trust in the spotter, due to the fact that you could barely see the terrain you were traveling on. Despite this handicap, the beefed-up pickup handled it all in stride. Station five gave us the opportunity to test out Baja mode. The station let us test how the Ranger Raptor would handle uneven at speed. The Fox suspension came in handy making sure all four wheels had grip at all times handling all the bumps with ease. It also gave us the chance to have a little bit fun with the vehicle and test out its 210hp and 500 Nm of torque. The sixth station was the trickiest of all the stations. Not only did we have to enter 4-Low and lock the differential but we also had to enter Rock mode. Here we would have to go up a near-vertical incline. The depth of the ditch itself was deeper than the average height of a Vietnamese man. This made our spotter look small in comparison.

The small course put the vehicle in awkward angles, with the Ranger Raptor's wheels in the swung into the air with deep off-camber ruts. Thanks to its four-wheel-drive system, however, the pickup truck was able to handle it easily not even breaking a sweat. 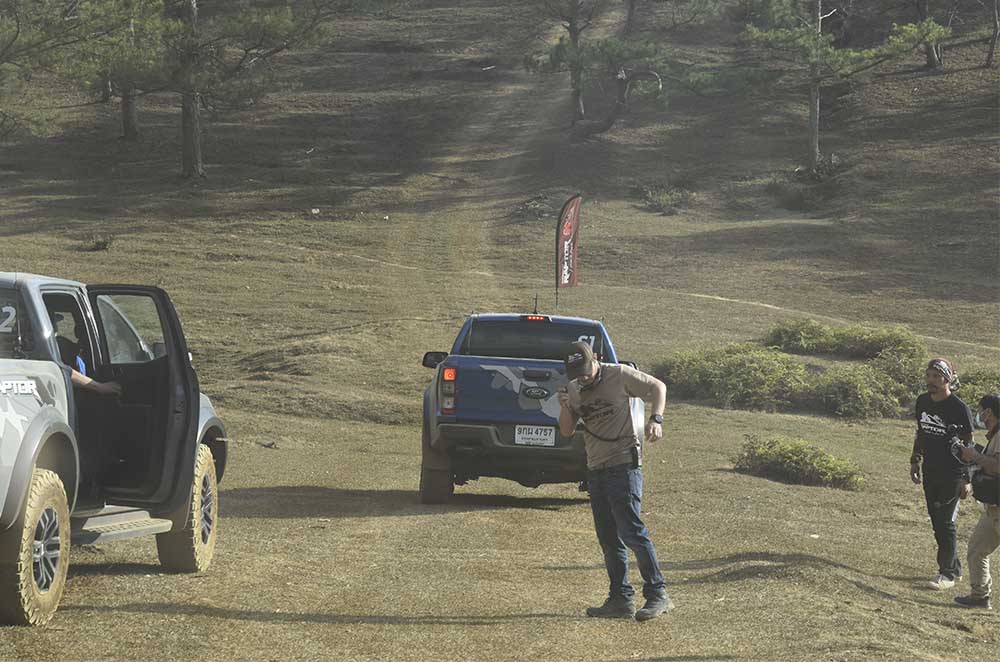 The seventh and last station gave us the chance to see how the Ranger Raptor would handle a 20-degree incline. We put it into 4-High, put on sand and mud mode, and drove it up the hill. The wide-open throttle was not needed for this as even with quarter throttle the vehicle could easily climb it.

With all the tests completed the Ranger Raptor performed spectacularly easily handling what we could throw at it and more. The beefed-up pickup really does live up to Ford’s "Built Tough" tagline.