Toyota Motor Philippines invited us to Clark International Speedway to demonstrate how it’s Toyota Safety System (TSS) works with its Technology Test Drive event. The event was broken down into three test tracks, each showcasing a specific part of the safety system as well as the new TNGA platform. Currently, there are two cars in the Toyota Philippines’ lineup that have this system – the Corolla Altis and the Super Grandia Elite. The TNGA platform, on the other hand, currently underpins five models in the local Toyota range. These are the RAV4, Camry, Corolla Altis, Prius, and Prius C.

The course was divided into three areas, each of which would be the testing ground for the safety systems included in the TSS suite. The first area was used to demonstrate how the Corolla Altis utilizes the TSS to keep the vehicle centered in the lane. The next area showcased the differences between the older platform and the newer TNGA platform vehicles. Another area was used to demonstrate the emergency and pre-collision abilities of the Corolla Altis with the use of the TSS. The last area showcased the Adaptive Radar Cruise Control feature that all vehicles with TSS come with. 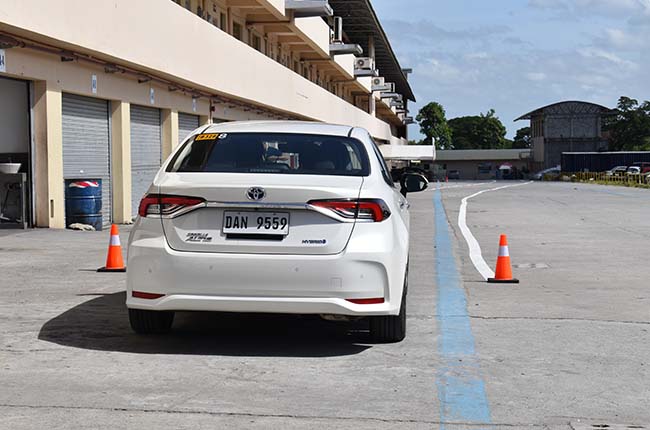 We were broken up into groups each with an assigned color and were sent to a specific area of Clark International Speedway. For my group, we were sent to the back of the pit area to test out the Lane Tracing Assist (LTA) function of the Corolla Altis Hybrid. The LTA system works in tandem with the car’s Dynamic Radar Cruise Control (DRCC). LTA uses a camera found just behind the rear-view mirror of the vehicle to look for the lines of the road. The Lane Departure Alert (LDA) also uses the camera to alert the driver if the vehicle is going out of its lane.

The camera can only see in black and white but it isn’t a problem as road lane markers come only in white and yellow. These two colors easily contrast against a black road. If the camera’s view is blocked, however, LTA and DRCC will not work. Toyota states that customers should not tint the area where the camera is located. We were then sent to the front half of the main-straight of the track. Here, a Toyota driver would show us how the Brake Assist and Pre-Collision System TSS suite worked. The car would be driven at varying speeds and straight at a “car dummy”. The car stand-in only had the rear of a generic vehicle printed on it. This is important as the camera in the Corolla Altis hybrid is only able to only detect the rear of a vehicle. It is currently not able to distinguish the side profile of vehicles, as well as motorcycles and tricycles.

For the pre-collision warning system and brake assist system to work, DRCC has to be activated. TSS uses both the camera and radar to determine the distance between your car and the vehicles in front. When the system detects that you are getting too close to a car, it will give you an audible warning. If you do not slow down or hit the brakes after the warning is given, the vehicle will automatically hit the brakes for you.

The system only works for speeds of 30 km/h or below, though. It will function at higher speeds but it can only slow you down by 30 km/h. This means if you are traveling at 90 km/h the car will slow it down to 60 km/h. 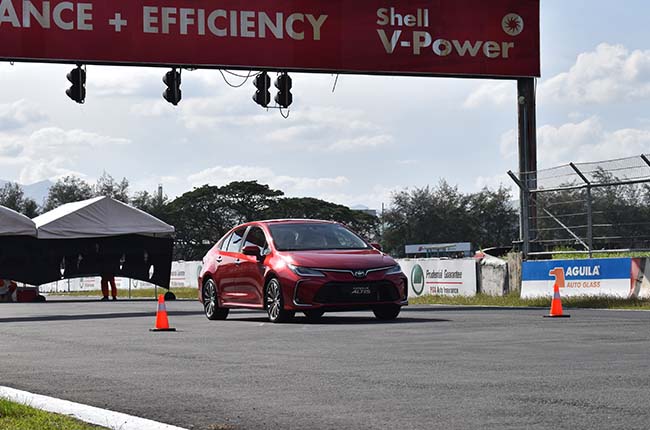 The next testing area was for the Radar Cruise Control. This brought us to the front half of CIS where a Toyota representative showed us how to activate it and how to use it. The system is capable of following a car on the highway as well as in stop and go traffic. The system uses the front camera and the radar that comes with the TSS. While it does grant semi-autonomous driving, Toyota says that users should not rely on this system and that they should always be ready. The system will prompt you if you are stopped for more than two seconds to reactivate the system.

The Toyota Safety Sense system on its own isn’t a perfect system. It still has a couple of flaws to adapt to especially for our inconsistent roads and unpredictable traffic. It is, however, a major leap forward in terms of safety and driving aids. It goes to show that technology has come a long way and that the cars on sale today are much safer and much smarter than they were before. For the TNGA vs non-TNGA tests, we were sent to the main straight of CIS. Here we used the back portion of the raceway to test the differences between older platform vehicles and those that use the TNGA platform. We were given two cars to choose from. The first vehicle was a 4th-generation Toyota Prius while the other vehicle was an older 2.0-liter, 11th-generation Corolla Altis. We were each given one lap of the course in either vehicle.

My takeaway from the experience is that the new TNGA platform is pretty spritely while still being able to deliver a comfortable ride. The 4th generation Prius that we drove was easy to control and provided stellar handling through the corners of Clark. The platform rotated predictably and was easy to control. It's only downside was its skinny tires as they would easily bend and lose grip in the process. The TNGA platform gave the hybrid vehicle a more progressive and predictable rotation. Rotation would come in early but gradually allowing for the driver to easily predict where the vehicle would go and correct it. The steering was lighter but this made it a bit more fidgety. This might have been the tire difference, however, as the Corolla Altis had a bit more grip on its side. The 11th generation Corolla Altis, on the other hand, felt slightly slower in terms of straight-up acceleration. While on paper, the Corolla Altis has more power coming in at 140 hp while the Prius with its engine and electric motor working together only produce 121 hp, the Prius was faster in terms of acceleration. This was due to the instantaneous torque that the electric motor produces allowing the hybrid vehicle to get off the line faster than its gasoline-driven counterpart.

In terms of handling the pre-TNGA platform still performed predictably but was less willing to rotate. But when rotation did occur, it happened abruptly – a trait that could catch new drivers easily off guard. The Corolla Altis also had wider tires with 215/45 series tires versus the Prius with 195/65s. This made it harder to distinguish the differences between the two.