Whenever someone asks us how fuel-efficient a car is, we always say that it depends. This boils down to a couple of factors that involve the driver, and the car. How you drive is going to affect the total kilometers you can get out of your tank of gas, but your car and the engine that you run is going to definitely play a big part, no doubt.

If you want to drive like a maniac, you’re not going to get good fuel economy, but if you drive conservatively and smartly, you can get extra kilometers out of a liter. We won’t cover the behavioral aspect of fuel-efficient driving, instead, we will focus on the cars themselves.

Related: Most fuel-efficient cars in the Philippines So let’s get to the heart of the problem – literally. A big-displacement engine will guzzle down your fuel faster at idle than a small-displacement motor. Though, with several advancements with regards to engines and how they operate, having a bigger displacement motor is not as taxing as before.

Turbocharging has become mainstream for many cars. Back then, a gasoline engine or diesel engine was limited to the amount of displacement it had, but since a turbo adds dense air into the combustion cycle, a small displacement motor can potentially outperform a naturally-aspirated large-displacement motor. This nets more power and torque, which means you’ll spend less time on the accelerator getting up to the speed limit.

High compression is another aspect that helps with engine efficiency, which translates to better fuel economy. If you can compact the air-fuel mixture as dense as you can get it, the resulting explosion will be more focused, albeit with the same amount of fuel.

Hybrid systems include a motor, which is connected to a battery, which then gets charged by the engine or through momentum or even via braking. This relieves the engine of some of its duty, which then allows you to save more fuel.

Miscellaneous items and technologies that help an engine preserve fuel include features like auto start-stop; which stops the engine whenever you come to a halt, cylinder deactivation; which allows the engine to run on fewer pistons, and eco modes; which can alter the throttle response, gearbox, or climate control. There are other technologies like the Atkinson cycle, which allow an engine to have less power, but perform more efficiently. 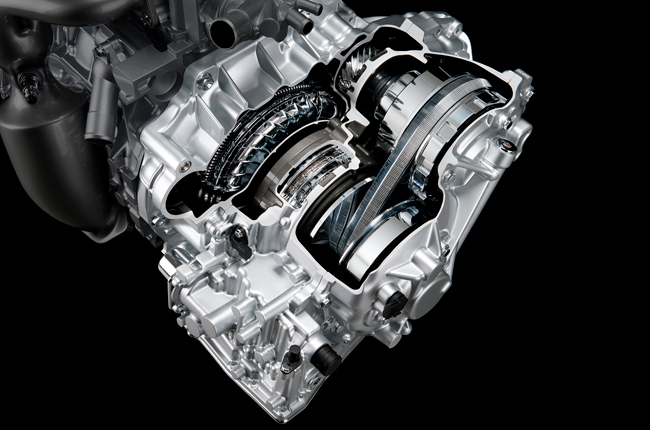 In the past, traditional automatics only used around four fixed ratios, but now, you can find traditional autos with up to 10 speeds. As a general rule of thumb, the more gears you have, or the taller your gear ratios are, the more fuel-efficient your car can be in theory.

Another case should be made for continuously variable transmissions (CVTs), however, since there is an infinite amount of gear ratios in between the shortest and tallest ratio for the pulleys. This allows the engine to work consistently in its optimal powerband depending on the throttle input.

Related: Why are CVTs so efficient – A simplified explanation In order to be as efficient as possible, a car needs to slip through the air with ease to return better fuel efficiency. The drag coefficient is the usual term in the industry that allows people to know how well a car cuts through the air. The lower the number, the more slippery a car is. Whenever a car is moving, it has to push air away and at higher speeds, this plays an even bigger role in your fuel efficiency. At lower speeds, there is no need to worry too much about this element. A car that weighs less won't need as much fuel to get going. A lighter car also won't need a bigger engine or more power. A big consideration has to be with torque because it offsets the weight of the car. That’s why diesel engines in SUVs can produce figures that are comparable to gasoline engines with high horsepower.

In general, however, a lighter car will accelerate faster than a heavier one, and the engine will be less taxed if the car is carrying less weight, to begin with. Manufacturers often look for ways to lighten cars but keep them strong at the same time. More and more brands are turning to unibody construction because of this. This kind of method is lighter than a ladder-frame or body-on-frame construction in general.

Extra weight should be cleared from the car. It could help your fuel efficiency if you cleared out the trunk every once in a while. Something heavy could also be at the back of your vehicle, and you just didn’t know it.

Related: What is power-to-weight ratio and why is it important? The condition of your car will affect the efficiency of its performance. A well-maintained system will perform optimally, while an engine that is past its prime will tend to produce less power and have inconsistent fuel efficiency and power.

Motor oil, though a bit trivial for some, can affect engine efficiency. A lighter weight lubricant allows your engine to move a bit easier. Consult your dealer’s service center as to what weight of oil will be optimal for your car. Usually, synthetics can come in a lighter weight because their viscosity remains consistent even at higher temperatures. If your engine can accept it, the lighter weight can help decrease the amount of internal resistance with regards to moving the lubricant around.

Spark plugs, in gasoline cars, are instrumental in the combustion process of an engine. Without a spark, the fuel won’t ignite. A faulty sparkplug or coil pack will result in a misfire. This harms fuel economy and the components inside an engine if not properly kept.

Tires, also play a big role in fuel efficiency. More grip doesn’t necessarily mean that your car will be more efficient, in fact, a grippier compound will need a greater force to start and keep rolling. This is why low-resistance rolling tires are used for most cars to greater enhance fuel efficiency. Dubbed eco-tires by most of the industry, this type of rubber tends to last long, and have less grip than that of a sport tire, but with better fuel economy since it takes less energy to keep rolling.

Tire pressure also plays a role in saving fuel. Keeping your tire pressure at the optimal level will help it roll on the road easier. Tires that are not optimally inflated will tend to have more rolling resistance than a tire that is properly pumped up, resulting in lost fuel economy.

Related: Can you really save fuel with the right tires?