Is it far-fetched to say that fuel efficiency is a universal language for car buyers? Of course, not. A good-looking car will sell, and so are vehicles that have competitive price tags. However, with fuel prices that are as erratic as the stock exchange, fuel efficiency will always be a selling factor for cars, especially in the Philippines.

Our vehicle reviews have quite a number of entries at this point, and almost every time, we make sure that we get the car’s fuel efficiency as part of our review criteria  – with the exception of sports cars because really, what’s the point?

Related: How we do our reviews

To assure you that our fuel economy readings were uniform, we made sure that driving manners were the same for each and every car. In-city fuel economy tests were done during rush hours, with an average speed of 10-15 km/h. Highway tests, on the other hand, were done for at least 30 minutes at an average speed of 90 km/h on flat parts of Philippine expressways – either by keeping the speed at 90 or by engaging cruise control, if available. Passenger and cargo loads are also minimal, with only up to two people on board together with their respective luggage.

With these said, here are the most fuel-efficient cars in the Philippines so far, based on our reviews. It shouldn’t be a surprise that a hybrid car tops this list, given the fuel efficiency benefits of an electrified powertrain. Among the few hybrid cars we’ve tested – and all the cars we're reviewed so far – the Hyundai Ioniq Hybrid excelled, returning a stark 30.1 km/L reading while driven nonchalantly on the highway.

In the city, with pure EV mode kicking in at times, the Ioniq hybrid registered the same fuel economy that midsize SUVs can deliver on the highway. Let that sink in. Yes, another hybrid, but a familiar nameplate this time in the form of the Toyota Corolla Altis. Launched in 2019, the first hybrid Corolla in the Philippines promised better fuel efficiency than most of the cars currently offered here – and that held true during our tests.

Since the Corolla Altis Hybrid and Ioniq Hybrid have similar powertrain setups (and similar curb weights), the Toyota hybrid registered similar fuel economy as well, albeit, a bit less stellar than that of the Korean’s. The Mazda CX-5’s great aesthetics and esteemed build quality aren’t just the things you would consider in this compact crossover – it also returned remarkable fuel consumption figures, enough for it to clinch a spot in our list of most fuel-efficient cars in the Philippines.

The CX-5 might look hefty, but its diesel variant’s fuel consumption wasn’t fazed by the weight that this crossover carries. The SkyActiv-D engine that’s paired with a conventional 6-speed automatic gearbox worked wonders, making sure that each drop of fuel was put into good use. Another diesel crossover makes it in our list, and this time it’s from French brand Peugeot. The 3008 compact crossover, which we'd like to call the King of the Jungle, exudes elegance and excellent interior styling execution to go with its fuel efficiency.

Under the 3008’s hood is a 2.0-liter turbodiesel mill, good for 150 hp and 370 Nm of torque. It’s quite thrifty during our tests; it’s just a shame that the recently-launched and more affordable variants don’t come with a diesel. 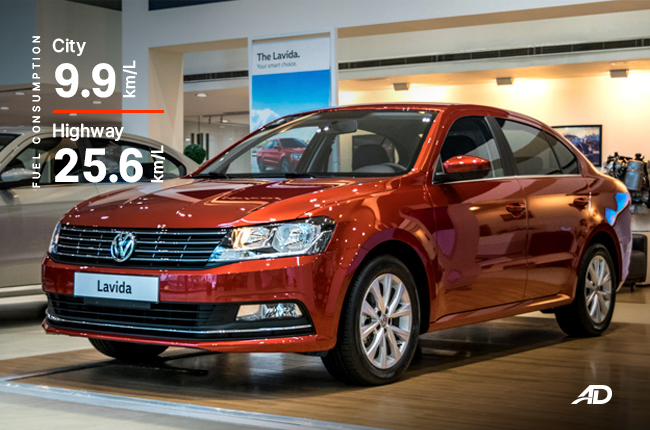 Volkswagen Philippines revamped its lineup some time ago, and the Lavida is one of the new names that the German brand has brought in here. The compact sedan boasts a feature-packed cabin, plus more-than-decent road manners to go with its competitive price tag.

Even better, the Lavida posted great fuel economy during our tests – far greater than most of the car we’ve tested so far. Guess that the automatic start/stop feature boded well for this car. The Suzuki S-Presso comes at an impressive price point, but even more impressive is its fuel-efficiency. The S-Presso managed a city-slicking figure of 11km/L and a highway figure of 25km/L flat. Even with a larger body, thanks to its lightness and simplicity the vehicle was able to surpass its stablemate the Suzuki Celerio, even with a CVT. Other factors may be involved in the result like gear ratios or passengers, but it is very impressive, to say the least. Of course, what’s a list of fuel-efficient cars without the small city hatchbacks, right? The Chevrolet Spark joins this list as the Golden Bow Tie brand’s contender in the city car segment. When Kia Philippines was relaunched in 2019 under the Ayala Corporation, the Korean marque introduced the Soluto subcompact sedan. It’s aimed at the tightly-competed small sedan segment, but with focus on providing the best value for a Filipino’s hard-earned money.

But the segment rookie didn’t just excel on the spec sheet – the Soluto’s fuel economy was rather noteworthy as well, both in heavy traffic and on the highway. 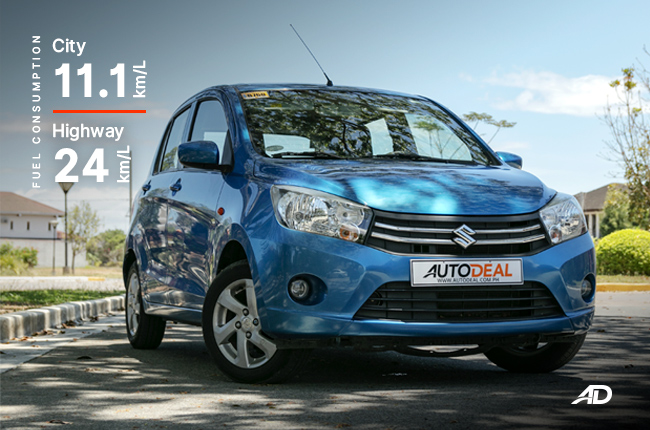 Whenever a list of most fuel-efficient cars comes around, the Suzuki Celerio has always been a want among the motoring public. True enough, the Japanese hatchback has proven its apparent popularity as a thrifty car, excelling in both our city and highway fuel efficiency tests.

You can thank its 1.0L engine-CVT combo for that, along with its lightweight body and conservative power delivery. Before 2017, the Honda CR-V wasn’t the first car that will come to mind when talking about fuel economy. The crossover’s predecessor wasn’t really stellar in conserving fuel, but that changed in the fifth-generation CR-V with its 1.6L turbodiesel engine and 9-speed automatic transmission.

What’s great about the current-generation CR-V is that you’re assured of great fuel consumption, whether you’re looking at a diesel or a gasoline variant. Of note, the gasoline-powered CR-V returned 7.5 km/L in heavy traffic and 19.7 km/L on the highway, which were shy of what the diesel trim could deliver, but still relatively thrifty for a crossover. When the Kia Soluto was launched in 2019, Hyundai tried to rain on its parade with an unexpected launch of its mechanical twin, the Reina. The two China-sourced Korean sedans are almost identical in terms of powertrain setup, save for the features included in their affordable price tags.

The similarities between the two didn’t end on the spec sheet, though. The Reina also returned impressive fuel efficiency numbers, allowing it to clinch the final spot of our 10 most fuel-efficient cars in the Philippines.

Disclaimer: There were cars that posted great fuel economy figures on the highway but a bit disappointing during our in-city tests. In order to make it to our list, the car should have good fuel consumption on both city and highway tests, which means the number should be greater than the median of the overall results.

As of date, the median figures are 7.9 km/L and 18.4 km/L for our in-city and highway tests, respectively. Moreover, there are revamped cars that we haven't reviewed yet (such as the Hyundai Accent), which should explain their non-inclusion on this list. We will continue to update this list as new reviews come in.