The crossover segment in the Philippines is arguably one of the hottest in the market. You have new entries coming left and right trying to fill all niches possible and addressing as many price points as possible to gain favor amongst would-be buyers. With this being a popular segment, MG Philippines did not want to miss out on the opportunity and launched the MG HS, it's the newest crossover to hit the local market.

What it brings to the table is a turbocharged motor, great looks, and a compelling feature set that can put it toe to toe against its more seasoned competitors. With that said, we take a look at what makes the MG HS such a competitive crossover. From the time that the MG HS launched until now, a certain well-known celebrity actually bought a unit and is currently driving it around as his new daily driver. We can’t fault him though as the crossover does look good on the outside. It has subtle styling that looks premium but hides a sporty athletic look underneath. It also comes with similar styling cues to the MG ZS and the MG ZST which have become popular nameplates for the brand in their own right.

The HS does come with LEDs headlights a massive grille and large wheels to complement its aesthetic. The car appears wide and long giving you a sense of space and its design is well sculpted even towards the rear which gives off a bit of a European feel if you catch our drift. 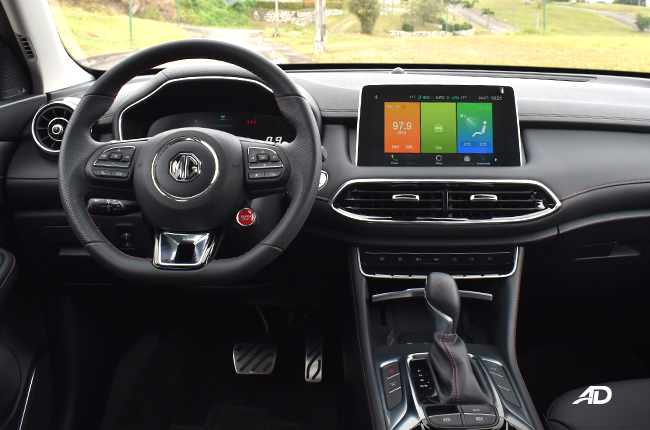 On the inside, the MG HS sports a modern and minimalist design. You get a dual-layer dashboard with a relatively plain but easy-to-use layout. You do get circular air vents on the sides which look like jet engines and add a bit of flair to the cabin. Aside from this, you get a nice flat-bottom steering wheel with a red glaring sport button on it as well. It's almost as if it begs you to just press it and use it.

Aside from this it also gets nice horizontal air vents at the front, a large infotainment system, and easy-to-use climate control switches. Oh and lest we forget it also comes with sports seats which are leather wrapped and comfortable as well. As for its technology, the crowing jewel for the MG HS is its 10-inch infotainment system that comes with Apple CarPlay and Android Auto. while this is great, the automaker doubled down and also gave it a 12.3-inch virtual driver information center, a power liftgate with multiple opening angles, an electronic parking brake with auto hold, and a tire pressure monitoring system just to name a few. This puts it a cut above the rest of its competition thanks to its compelling feature set that everyone will be able to appreciate. Under the hood, the MG HS is powered by a 1.5-liter turbocharged 4-cylinder gasoline engine. It produces 166hp and 250 Nm of torque from 95 RON gasoline. Power is sent exclusively to the front wheels via a 7-speed TST which works similarly to a DCT.  It also comes with paddle shifters and several drive modes for a sportier drive. Stopping power for the crossover SUV comes from disc brakes all around with an electronic parking brake in charge of keeping the car still while it is parked. For its ride comfort, the vehicle comes with fully independent suspension all around. In order to be competitive in the Philippine market, the MG HS also needs to come with a competitive price point and it certainly does. The crossover can be had for as low as P1,258,888 and for as high as P1,308,888 which puts it smack dab in the middle of its competition in terms of pricing. It comes with many of the same technology as its rivals and has the power to boot making it a competitive model, especially for those looking for a well-built and feature-rich crossover. All in all the MG HS is a great vehicle to consider especially if you want something a little bit bigger than a subcompact crossover but with a price point that it's near it.