The Volkswagen T-Cross is the newest crossover to join the European brand’s selection of vehicles in the Philippines. It brings with it a unique design language befitting of a global model as well as certain features that wouldn’t be normally found in its segment—especially when it comes to safety. With the T-Cross entering the highly competitive crossover market in the country, here are a couple of reasons why it stands out from the many choices available. Volkswagen being the German brand that it is has designed its vehicles to come with distinctly European styling. This means that the automaker leans more towards the subtleties in its design language rather than an outright aggressive look. As the T-Cross is a global model it adheres to this distinct European look very well.

Instead of sharp lines, cuts, and creases, you get a more flowing design language that is accentuated by the simple shapes and accents. This can be seen in the vehicle’s face as you get a wide yet thin grille at the front with only a few trapezoidal accents found on each layer. You also get simple but very functional rectangular headlights that match well with the vehicle’s overall look along with silver accents on the bumper. Over at the rear, the rear and it’s the same story as the T-Cross goes with a more straightforward approach to the design with a large black accent on the tailgate that comes with a thin and long reflector on it. The taillights also match well with the vehicle’s design thanks to their angular design. Overall it’s a design language that isn’t too loud but is more than enough to stand out in a sea of vehicles. If you are tired of the same monotone interior of vehicles available on the market today, the Volkswagen T-Cross gives you a refreshing breath of fresh air with its color-matched interior accents. This means that whatever exterior color you choose for the exterior of the crossover, will be reflected on the inside of it as well. As the T-Cross is available in bright colors, you can expect that same youthful color palate to be on the inside of the vehicle as well. The interior accents are also strategically placed as they encompass the dashboard, the instrument cluster, and the center console as well. Aside from this the gray and white colors of the interior also help brighten up the cabin as they also work together to give it a more modern look and feel. We understand that almost all vehicles being sold in the Philippine automotive market today come with a touchscreen infotainment system, however, the Volkswagen T-Cross does it a little bit differently as it comes with a special feature. Setting it apart from its competitors, the crossover comes with gesture functionality, this means that you can swipe between the vehicle’s infotainment menus without having to lay your fingers on the screen. Aside from this the infotainment system also has Apple CarPlay, Bluetooth, USB, and USB Type-C connectivity. Sadly there is no Android Auto available for the model. Regardless, the gesture control gives it a unique advantage over its competition as this feature is normally seen in luxury vehicles and in the automaker’s flagship model in the Philippines, the Volkswagen Lamando. A feature that isn’t normally found in its category, the Volkswagen T-Cross comes with autonomous braking as standard for its highest trim level. This is a great feature to have as it helps prevent accidents from happening as the vehicle can slam on the brakes for you if it detects that you are too close to an object and show no signs of slowing down. If you are worried about the sensitivity of the feature, don’t worry as you can set its sensitivity to your liking, ensuring that you still remain safe and that the safety feature is still activated while driving. While this is a feature found in most European vehicles, in the crossover segment this is a rare sight. Instead of your typical steering wheel-mounted headlight control stalk, the Volkswagen T-Cross comes with a light control knob instead located to the very left of the dashboard. While it may take some time to get used to it’s still a great feature to have and offers a unique experience outside of what the typical crossover in its class can offer. regardless of its slight learning curve, it doesn’t take anything away from the functionality of the headlights as they light up a clear-cut view of the road. 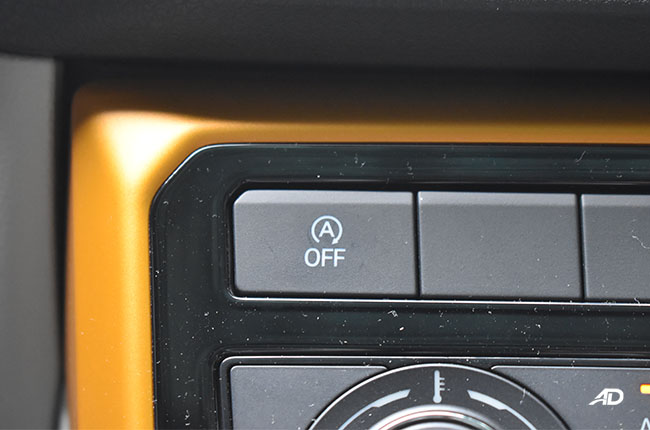 Another unique feature that the Volkswagen T-Cross has for its segment is its start-stop functionality. This helps you save on gasoline by turning off the engine while you are stuck at a long stop or if you are waiting at a stoplight. While it may confuse a few drivers at first, don’t worry as it does not interfere with the air conditioning system nor does it affect the infotainment system of the vehicle. It will still remain cold in the cabin and the music will still continue to play even with the feature activated, Just simply take your foot off the brakes and the vehicle will start immediately and you can proceed with your journey.