The Ford Ranger is one of those pickups that are popular among car buyers. With its macho-looking demeanor and high ground clearance, the Ranger is a pickup that’s ready to take on any terrain.

However, there’s more inside this American pickup truck for you to love aside from its looks. To see all the features available, we chose the top-of-the-line Ford Ranger Wildtrak 3.2L 4x4 AT variant. The Ford Ranger can seat up to 5 people. You and your passengers will enjoy its seats as its leather covers are soft to touch. As the copilot, the front passenger can easily use the 8-inch touchscreen head unit and dual-zone automatic climate control with user friendly controls.

Your 2nd row passengers will enjoy the ride too as it has a wheelbase of 3,220 mm – at least 70 mm longer than its closest competitors like the Nissan NP300 Navara or the Toyota Hilux. This translates to more legroom for your taller companions. There’s also a 230-volt outlet inside the cab so if you need to plug anything, you will be able to do so. Aside from the audio controls on the steering wheel, you can also connect your cellular phones through SYNC 2 software. This allows you to control the head unit or make a call using voice commands.

The Ford Ranger is full of driver assistive technologies that are useful in varying situations. Instead of the conventional hydraulic type, it has electronic power-assisted steering. This will save you cash on repairs as it doesn’t have steering pump, which is one of the car noises you’ll hear when broken. Expressways and speed limits won’t be an issue with the Ranger as it has an adjustable speed limiter and adaptive cruise control. The former sets the maximum speed your car can go, while the latter can automatically increase or decrease the car’s speed to keep pace with the car in front of you.

Moreover, it has collision warning that flashes a red signal and pre-charge the brakes when a potential crash is up ahead.

It also has lane keeping system that senses the road markings to keep you from merging away from your own lane. If you happen to move out of your lane, without engaging the turn signals, the steering will vibrate to warn you. This could come in handy during road trips which could make the driver drowsy due to the long highway stretch.

When it’s time to park, the Ford Ranger has sensors at the front and back. This, in combination with the rear cameras, makes sure that you’ll be able to park safely.

Lastly, it has automatic headlamps and rain-sensing wipers that are totally handy during bad weather conditions.

With a wading depth of 800 mm, the Ford Ranger can go into floodwater that reaches above the knee. It’s also gifted with a bigger and stronger chassis thus, it can lift up to 1,000 kg of payload and pull up to 3,500 kg – about the weight of 2 fully-loaded Ford Focus models. 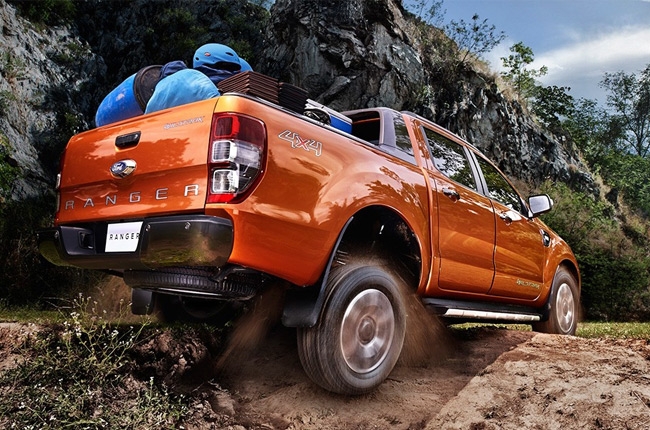 One of the Ranger’s best assets is its immense rear bed. It is 1,139 mm wide, 1,540 mm long, and 511 mm high. With this size, you can fit around 6 duffel bags as well as other smaller items. It’s also equipped with lights so you could load it up even at night.

The Ford Ranger is available in 2 powertrain variants – the 2.2L and 3.2L TDCi Turbo diesel engines. The former can produce up to 160 hp and 385 Nm of torque, which is 10 hp and Nm higher than its predecessor. If you prefer the bigger one, it can churn out 200 hp and 470 Nm of torque. Just like its smaller counterpart, Ford has tuned its engine to be more fuel efficient than its predecessor for better consumption.

The Ford Ranger not only exhumes authority and masculinity on the road. It’s also full of high tech features that can give you a safe and comfortable ride.

With a price tag of P1,699,000, the Ford Ranger Wildtrak 3.2L 4x4 AT proves that it has more than just its attractive looks. The other variants are equally capable, however, not all these features are available.

For more information about the Ford Ranger, visit the AutoDeal Car Guide.