The Toyota Wigo has a crowd favorite in the Philippines. Notably, this pint-sized hatchback consistently claims its throne as one of the Philippines' best-selling cars, year after year. It is undoubtedly one of the most affordable yet reliable automobiles in the local market today. These aspects are only a few reasons as to why many car buyers are leaning towards the small yet mighty Wigo.

Related: The Toyota Innova gets a special TRD Sportivo trim in Indonesia

After having its Philippine debut in 2014, the Toyota Wigo has already gone through two makeovers. The current model is still a first-generation, but it now showcases a more matured look along with the addition of more features that will surely entice more prospective buyers. Locally, this pint-sized hatch is offered in four distinct variants, namely E MT, G MT, G AT, and the TRD S AT. Let’s go through each of its distinct features and technicalities, shall we? The E MT is the most affordable ticket to a Wigo, it’s quite basic though, but it can still get you from point A to point B in a reliable manner. Aesthetically, this trim loses a number of exterior reinforcements, including the turn signal indicators on the side mirrors, the fog lamps, and rear spoiler. Despite being a base trim, the Wigo E still comes standard with a set of 14-inch alloys. Do take note that the photo shown above is the G grade model, therefore, the said alloy design of the E may differ.

As for convenience features, this variant features power windows, power door locks, manual air conditioning, and a 2-DIN radio with AM/FM, AUX, USB, CD, and Bluetooth function. That’s about it, then again, power features are still quite generous despite the fact that this is an entry-level variant.

All trims of the Wigo come with one engine choice, specifically, it’s a familiar 1.0-liter 3-cylinder motor that produces 65 hp and 89 Nm of torque. For the E trim, this mill can only be paired with a traditional 5-speed MT.

As for safety, it gets an Anti-lock Braking System (ABS), backup sensors, and airbags for both the driver and passenger. These technicalities translate to only P568,000, which is indeed an affordable piece of machinery.

The Goldilocks trim of the pack 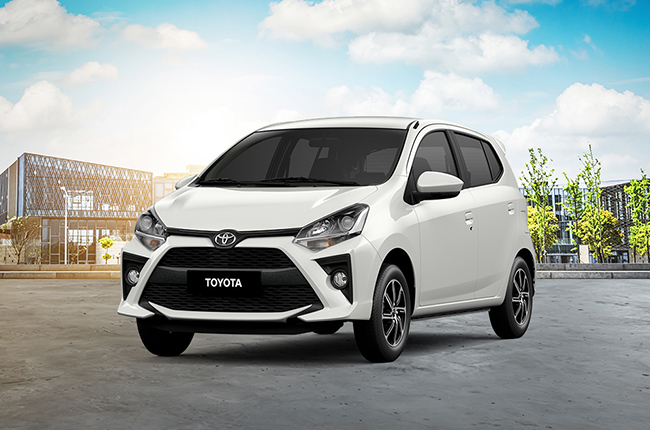 Next up is the G variant which could either be had with either manual or automatic transmissions. What sets this apart from the E variant is the heightened looks of its exterior, which is further complemented by the addition of the turn signal indicators on the side mirrors, fog lamps, a rear spoiler, and a set of 14-inch alloys which sport a machine-cut design.

Inside, the pint-sized hatch gets a bit of an upgrade, while the E comes with a knob-type air conditioning system, the Wigo G is reinforced with a more upscale LCD air conditioning panel. Apart from that, the 2-DIN radio was also diminished, with it being replaced with a touchscreen display for a more enjoyable in-car entertainment experience. For added convenience, this variant comes with a push-start button along with keyless entry. Lastly, the steering wheel now comes with audio controls in order to spare you from distraction.

As mentioned, you get the same 1.0-liter engine but this time the said mill can be paired with either a 5-speed manual or a 4-speed automatic transmission.

It does get the same set of features mentioned on the E variant, although this trim sports a few additions, such as an immobilizer and a backup camera. Even with all those additions, the Wigo G’s price still ranges affordably from P623,000 to P658,000 for the MT and AT. 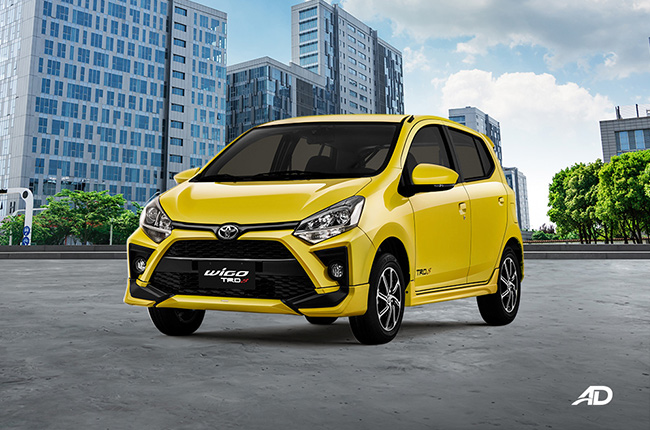 The TRD S is the range-topper of the Wigo lineup, and we tell you, it really is more than just a pretty face. So upon looking at its photo, you do notice that the TRD S gets a number of sporty appointments which is indeed in conjunction with its TRD badging. The sport package on this trim is actually composed of the side skirts, front spoiler, rear skirt, two-tone spoiler, and the abundance of TRD S details.

Apart from the obvious aesthetic upgrades, the Wigo TRD S also comes with a few additional upgrades which make it a considerable trim level. While the airconditioning from the G remains the same, the touchscreen infotainment system of the TRD S supports Apple CarPlay and Android Auto which is indeed a huge plus for most buyers nowadays. Another bonus is the addition of a dashcam recorder, which is indeed handy during accidental encounters.

Again, this uses the same engine. what differs this from the G is that there is only one transmission available for pairing, and that is the 4-speed AT. As for safety, the Wigo TRD S also comes with the same set of features with the G variant. So with those upgrades, both for aesthetics and convenience, the Wigo TRD S comes out at P700,000. After an in-depth analysis of all the different trims of the Wigo, we’ve come to the conclusion that the TRD S comes out at the top of this variant comparison. Why, you ask? Apart from its aesthetic upgrades, the Wigo TRD S gives you quite a lot for a small car. Shelling out P700,000 will actually give the additional needs and wants you’d wish to find on a small hatchback such as this.

As for the G trim, it’s actually on par, as it does give you the right amount of amenities that won't require you to break the bank, plus, there are two transmission options to choose from. What sets it apart from the base E is that buyers will surely be enticed with the flexibility of having a manual car that does not scrimp on features.

Lastly, the E may seem bare, honestly, but that does not mean it’s not worth looking at, rather it just caters to a specific type of buyer who needs a basic transporter that can take him/her from point A to point B in a reliable manner, simple as that.

Then again, it’s still a matter of preference, and you’ll be able to choose the right Wigo for once you’ve clearly identified your needs and wants.

Want to buy the Toyota Wigo without leaving the comfort of your home? Try our 'Buy Online' feature and just fill-up the necessary details for your online transaction.

If you're ready to buy Toyota Wigo, you can reserve online!