Columbian Autocar Corporation (CAC), the exclusive distributor of Kia vehicles in the country, launched the 2017 Rio hatchback. From the looks of it, it is all set to take on its rivals in the local automotive market with its new exterior styling and updated interior layout.

To put things in perspective, the all-new Rio hatchback will go up against the likes of the Mazda 2, Ford Fiesta, and Toyota Yaris. Towards its side, the Rio is characterized by straight lines, making the vehicle look bolder and more composed. The rear, on the other hand, gets a large bumper and distinctive wraparound LED taillights.

Aside from the new look, the Rio hatchback is also bigger as compared to its predecessor. Kia claims that it is 5mm wider and 15mm longer, which translates to a more spacious interior cabin. Speaking of the cabin, Kia’s subcompact hatchback comes with a straightforward, driver-oriented dashboard. It also features a number of design changes as seen on the steering wheel, air conditioning vents, gear lever, and instrument cluster. The 2017 Rio hatchback is powered by a 1.4L Kappa gasoline engine that delivers 100 hp and 133 Nm of torque. The engine is mated to either a 4-speed automatic or 6-speed manual transmission. 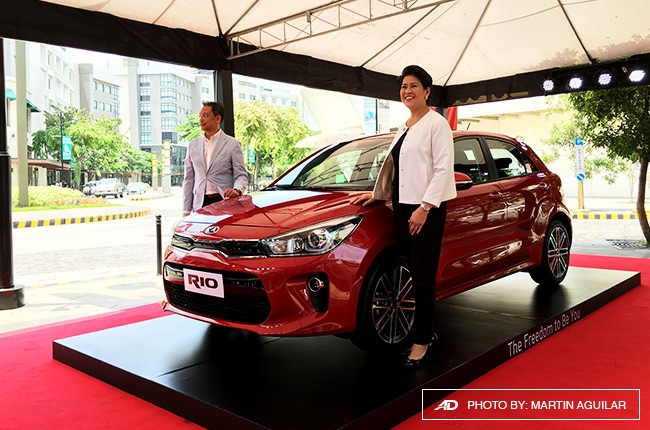 The 2017 Rio hatchback will be available starting next month. However, there’s no word yet when and if Kia Philippines will bring the all-new Rio sedan.