A month after the announcement of a 2-door Yaris Gazoo for the World Rally Championship (WRC), in-depth details regarding the 2017 Toyota Yaris are now out in the open. There is now a clearer picture of what it would look like when it rolls out, especially with the updated photos for the 4-door Euro-spec model.

What makes the 2017 Yaris even more anticipatable is the fact that it underwent a €90 million (P4.78 billion) worth of development. This includes the visible exterior detailing, interior changes, and more than 900 new parts tweaked inside the vehicle.

Albeit, you might be wondering, the refreshed 2017 Yaris is based on the 3rd generation Euro-spec model. The locally available Yaris is the ASEAN-spec version, which shares platform with the Vios. The 4-door 2017 Yaris reveals a 2-tone finish. A glossy black paint extends from the tip of the newly-designed headlights to the A-pillar, all the way to its C-pillar – covering the top half of the vehicle. The grille, which is claimed to be inspired by the ‘catamaran’ boat design, reminds us of the large ones present on both the recently revealed Camry and Vios.

However, the new Yaris is not just about the outside. New upholsteries, colors and trims are only the tip of the iceberg for interior improvement. More key changes include new instrumentation and controls makes a better human-machine interface (HMI) performance. Meanwhile, it all directs to the 4.2-inch color TFT multi-information display, which is fitted as standard from mid-grade. Yet, it’s what under the hood that makes a car. Powering it is the new naturally-aspirated 1.5 L gasoline engine. This boasts 111 hp with 136 Nm of torque at 4,400 rpm, which launches it 0.8 seconds quicker than the retiree 1.33 L engine. On the flip side, the ASEAN spec Yaris falls behind with its 107 hp and 140 Nm output.

Toyota also claims that this 10% more power even meets the Euro 6c emission standard. With the fuel economy improvement of 12%, the hatch is now more efficient than ever.

Furthermore, along its more power is an even quieter sound with new noise-reduction improvements. Of note, this includes changes in the engine mounts, larger roll restrictor, new front driveshafts and subframes. In addition, a modified air box intake system, and a new sub-silencer were even installed to optimize the ride noise. 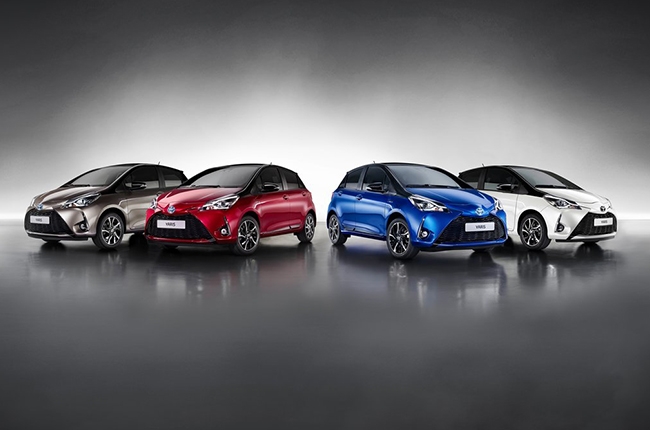 The 2017 Toyota Yaris is set to debut next month at Geneva Motor Show. With the refreshed look sported on the photos, we can’t help but wonder if the euro-spec version will ever reach our shores, or will a refreshed ASEAN-spec Yaris will come out soon, just like the Vios.