As expected, the Mercedes-Benz has begun keeping its lineup up to date and in line with what the A-Class Sedan has started this year. Next up is the B-Class, and it gets a new, handsome look for 2019, along with numerous tech features that could wow any of its occupants.

Related: The 2019 Mercedes A-Class now has a sedan option

For 2019, the all-new B-Class crossover (MPV or Minivan? We’re not sure anymore.) gets the snazzy fascia of the A-Class. The multi-beam headlamps are among its best traits, walking away from the unusually large headlamps of its predecessor. The odd proportions are also gone, which includes a shorter front overhang. Less sculpting on the side gave the 2019 B-Class a dapper look, which we think is a big improvement from before. The improvements continue in the B-Class’ cabin, which is actually quite expected since it has been years since the people-hauler got its major update. Buyers would have a choice between seven-inches display or a bigger 10.25-inch option – both running Mercedes’ all-new MBUX infotainment system found on the A-Class. Optional features include intelligent voice control, Augmented Reality, and a head-up display.

Ingress and egress have been improved with 2019 B-Class, but cargo space has been slightly decreased by five liters. Nevertheless, comfort has been greatly improved with some redesigned areas and tweaked suspension, as are ergonomics and aesthetic updates. 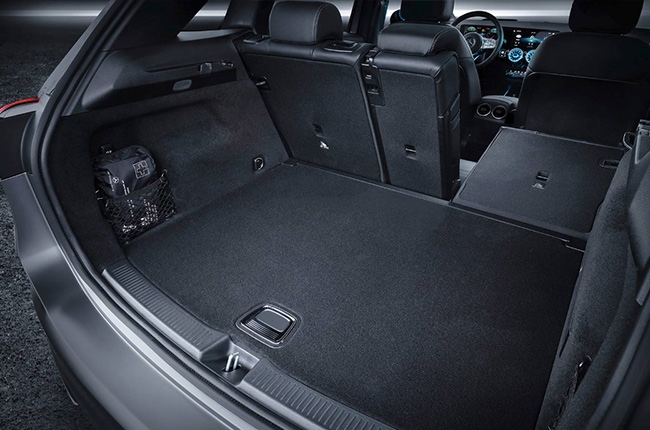 Engine choices for the Mercedes B-Class range a 1.3L power plant to a bigger 2.0L for the top variant. The 1.3L four-cylinder gasoline engine produces either 134 hp or 160 hp. There’s a 1.5L diesel variant available, too, and it produces 114 hp and 260 Nm of torque. These engine variants come with a seven-speed dual clutch transmission.

As for the 2.0L diesel, it will produce either 148 hp or 188 hp, but it will be paired up with a fresh eight-speed dual-clutch gearbox. Other engine options will follow, as well as the 4MATIC all-wheel drive.

The B-Class drive modes are among the star of the feast, as it gets Intelligent Drive from the S-Class with semi-autonomous capability in some situations, presumably while cruising at highway speeds. In addition, high-tech radar-based safety systems are also included, like active lane change assist, active brake assist, and active emergency stop assist.

Get Notified About Mercedes-Benz B-Class News