A few days after the reveal of the next-generation Ford Ranger Raptor, Ford Motor Company is now ready to showcase the pickup truck’s SUV counterparts. The 2023 Ford Everest officially makes its debut featuring a new design, new tech, and most importantly a new engine under the hood. It's a great improvement over the previous incarnation as it stays true to its original theme of being one of the most powerful SUVs on the market that also comes with the most amount of technology. With that said, here is what Ford has done for the next-generation Everest. On the outside, the next-generation Everest maintains a strong and rugged appearance similar to what is seen on the new Ranger. It comes with wide wheel arches and a more squared-off appearance. Aside from this, the SUV comes with Ford’s new global design DNA that showcases C-clamp headlamps and a strong horizontal upper grille bar. The front of the new Everest also comes with a mix of new horizontal and vertical elements which come together to give the vehicle a more stable appearance.

On the sides, the SUV also features a strong shoulder line that stretches from the front to the back. As Ford has given the next generation a wider track, its design had to be slightly tweaked resulting in a more dramatic swell over the wheels further enhancing its strong and modern look.

The back is much of the same story as the next-generation Everest now comes with a new rear which also features a new set of LED headlights. Aside from this the SUV also gets a new tailgate garnish and a much boxier rear overall. 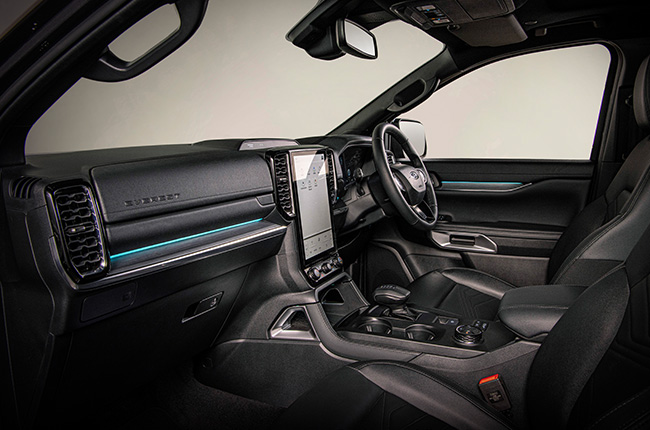 On the inside, the next-generation Ford Everest comes with a similar look to its Ranger brother. It comes with a tall dashboard that comes with minimal design elements, everything is pretty much straightforward but draws emphasis to the large infotainment system in the middle. Aside from this, Ford says that the interior has been thoroughly redesigned as well.

The third row has been reworked to provide more space at the rear and the rear cargo area has also been redesigned as well. Ford has even added a new subtle feature in the vehicle called the “apple catcher” which helps stop objects from rolling out of the cargo area if the vehicle is parked at an angle. With attention to detail being put on even the tiniest thing, it goes to show that Ford wants to make the next generation of the SUV stand out amongst its competitors. As for the technology that the next-generation Everest will pack, the SUV already has a stellar lineup of equipment ready. While these will depend on local market needs, the Everest will be made available with either a 10.1 or a 12-inch touchscreen infotainment system. Aside from this, it will also come with an 8 or 12-inch digital instrument cluster to complete its new and more technologically advanced looked. Ford has also thought ahead and listened to its customers by giving the SUV a charging point at every row. Ford has also updated its terrain management system for the 4x4 models of the Everest giving it better off-road capabilities. 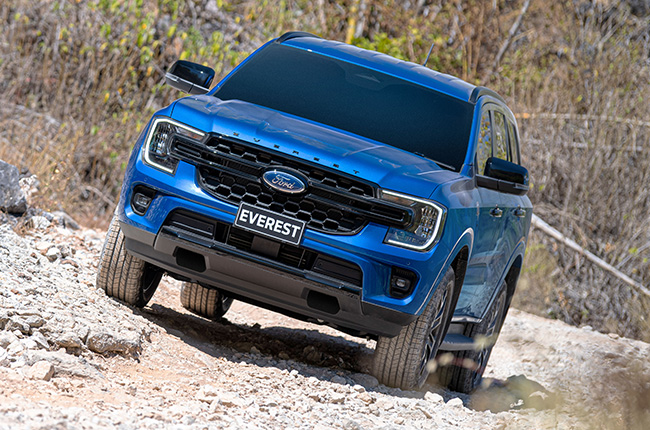 In terms of power, the next-generation Ford Everest has something new to bring to the table. While it does retain its 2.0-liter single and bi-turbo diesel engines pictured above, these have been upgraded slightly for better reliability. However, the American automaker has announced that it will be bringing in a new 3.0-liter turbodiesel V6 motor for the lineup of the Everest. While its horsepower figures are still unknown, the American brand has hinted that it will make around 600 Nm of torque. Aside from this, the SUV will also be available with the 2.3-liter Ecoboost motor. As for its transmission options, the 10-speed still remains along with a six-speed automatic gearbox.

Ford has also given the next-generation Everest an upgrade to its 4x4 system. The SUV can now be had with a new electronic transfer case, this gives it access to rear-wheel-drive mode, full auto/ permanent 4x4 mode, 4H, and 4L for those who want to take their Everest off-road.

For the safety features of the next-generation Everest, the American automaker has given it the best that it can offer. It now comes with a new adaptive cruise control system with stop-and-go functionality with lane centering, a new lane-keeping assist system with road-edge detection, a new evasive steer assist system, and a new reverse brake assist system. On top of this the SUV, depending on the market will also come with a set of 9 airbags. Ford has also included a new central airbag that deploys between the front passengers for better safety.