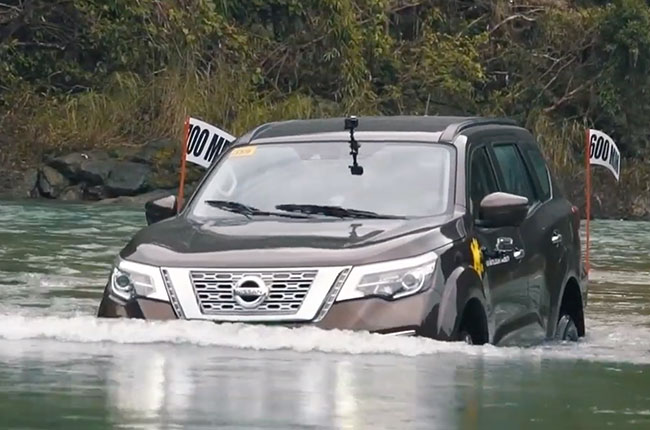 The rainy season is here, and there is no denying it. The increased traffic in the Metro could mean that several routes on or leading out of major thoroughfares have been blocked by a life-giving substance scientifically known as dihydrogen monoxide.

All kidding aside, water is a necessity in life, but too much of a good thing can spell disaster for you especially when the roads of Metro Manila are not as flood-proof. You can take precautions such as planning your routes with a navigation application, or you can get an SUV with a rated 800mm water wading depth.

Now we understand that 800mm is a little hard to scale when you think about it, but as a point of reference, the average Filipino is about 165 cm in height. So your average Juan will be hip-deep in flood water, and the Nissan Terra will just go through it with ease.

So how does the Terra do it exactly? It boils down to a few things, namely the location of the air intake. With a high placement, the flood would have to be really deep in order for the water to reach the engine. There are other parts that shouldn’t get submerged as well, such as the alternator, but thankfully Nissan placed the Terra’s this part higher up in the bay. It also helps that the SUV has high ground clearance which puts everything even higher up than a normal sedan.

While the Terra is capable, things can get awry pretty quick in the hands of an inexperienced driver. Make sure to be aware of your surroundings and enter the water slowly. Don’t cannonball in and create a big splash – good in the pool, not when you’re in a car. Water can seep through the tiniest of cracks, so it is good to be careful.

Once in the water, however, you want to create momentum and keep your foot at a constant press on the accelerator. Also, don’t follow another vehicle attempting to make a water crossing, because if he stops or makes a mistake, then your car will likely follow in its footsteps.

So take the advice and wade with it. Also, take a Nissan Terra while you are at it since it still remains as one of the most capable SUVs we have gotten a hold of in the past year. No matter which variant you choose, an admirable performer is at the heart of this midsize SUV.