Okay, this might not be the best day for Aston Martin's Vanquish model line. The British automaker is taking its first steps of its Second Century Plan, wherein it aims to replace each existing 2-door sports car models.

Sounds like we're counting the Vanquish as one of the early casualties, as Aston Martin announced the return of the DBS nameplate. The moniker was the product of William Towns' brilliant mind, which saw production in 1967. Only 787 units bearing the DBS nameplate were made until it got discontinued in 1972 and was resurrected in 2007 as the DBS V12.

Related: Aston Martin now offers a V8 DB11 for those who think V12's too much

Not only that Aston Martin’s plan is all about pulling the DBS nameplate out from the dusty old barns, they’re also building it using the superleggera. Yup, as in ‘super lightweight’ if you are to translate it in English.

The supperleggera body construction was originally used in coach buses manufactured by Carrozzeria Touring until it got introduced to Aston Martin's DB models. It was the DB4 which earned the first Superleggera badge, though the DB5 was the more popular one. The patented technique of this super lightweight body construction uses magnesium-alloy.

“When you hear the name DBS Superleggera, you know what it is. It’s the definitive Aston Martin Super GT. It’s an icon, a statement and this one will be no different. We’ve pushed the boundaries of performance and design to give this car a distinct character and ensure it is worthy of the heritage and weight that this name carries.”
Marek Reichman
Aston Martin Chief Creative Officer

Aston Martin is bringing a legend back home, that's true. However, the fact that it is replacing the Vanquish means that this model's going to be a superior one. The Vanquish is a beast both in performance capabilities and appeal, so the DBS better top that with everything Aston Martin has in its portfolio. 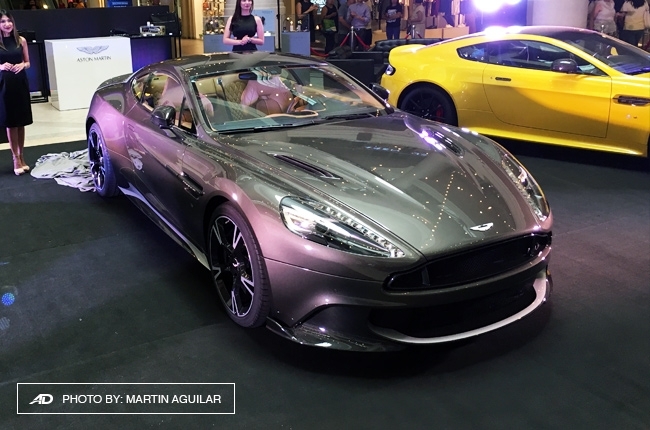 (above) Aston Martin Vanquish launch in the Philippines

The comeback of the DBS nameplate, joined by the acclaimed superleggera body construction, is the arsenal of Aston Martin's new-generation Super GT. It is expected to be unveiled in 2019, although the British marque promised to reveal further details by the second quarter of 2018.