Remember the compact A1 that represented Audi’s take on a premium subcompact hatch that was equally at home in the city and in the suburbs? Audi has just released its second generation A1, featuring new infotainment and driver assistance systems, as well as an all-new design. Now longer and slightly wider, the 2019 Audi A1 Sportback features a wide track and stance, with the low-placed singleframe grille and side air inlets provide an intimidating look when viewed from the front. As a nod to the Sport quattro rally icon in the 80’s, there are three flat slits that sit below the edge of the hood. The forward-slanted C pillar and roof contrast line add to the visual flair, as do the wheels in combination with a low shoulder line, creating a solid stance. Optional S line equipment add more aggressiveness with larger air inlets, additional sill trims, and a larger rear wing. The top-of-the-line engine is also gets twin tailpipes. Lighting is equally striking as the combination of DRL (daytime running lights) and LED headlights create a distinctive look that share with the low slung design features. A 3D lens for the rear two-part taillights complete the look and are instantly recognizable as an Audi.

There are choices of different gasoline engines with outputs ranging from 95 hp to 200 hp, both naturally aspirated and turbocharged. Audi is making a manual transmission or the seven-speed S tronic dual-clutch transmission available for all engines. The exception is the top-of-the-range engine, where a six-speed S tronic transmission shifts gear as standard. Suspension duties are handled by a front McPherson construction, and a compact, lightweight torsion beam axle is used at the rear. There is also an option for a tauter sport suspension. The new A1 Sportback rolls off the production line with the Audi drive select dynamic handling system as an option. With it, drivers can select from four modes that influence the driving characteristics: auto, dynamic, efficiency, and individual. For the first time, customers can combine exterior and interior lines however they like. Depending on the equipment line, certain attachments on the exterior are available in various configurations. Black accents and different interior trim options that can be taken from the other equipment levels will be offered.

Speaking of interiors, the Audi A1 Sportback was built to have “the sportiest interior in its class”, with driver focused design and sporty touches. Even the basic version comes standard with a fully digital instrument cluster with a high-resolution, 10.25-inch display and a multifunction steering wheel. The optional Audi virtual cockpit with an extended range of functions presents comprehensive information such as animated navigation maps and graphics of some driver assistance systems in the driver’s direct field of vision. 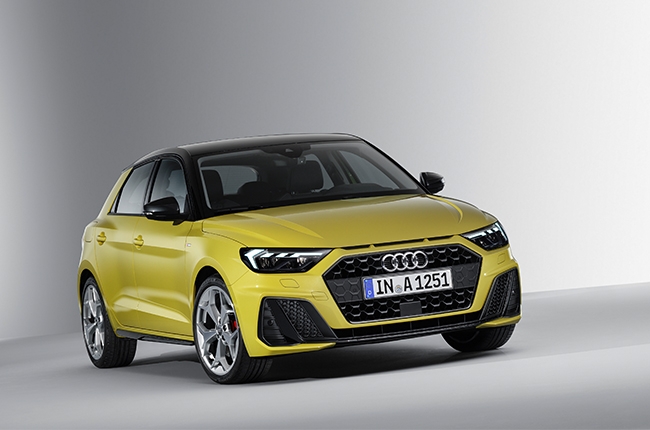 Driver assistance systems are taken from its bigger siblings in the Audi family, with features such as lane departure warning, Audi pre sense front - a system that recognizes critical situations involving other vehicles, crossing pedestrians or cyclists ahead of the vehicle, even when visibility is poor such as in fog, automatic emergency braking, adaptive cruise control, and automatic parking assistance systems.

The new A1 Sportback is available in a choice of ten colors. The roof can be optionally finished in a contrasting color from the A-pillar to the roof edge spoiler. The exterior mirror housings, the side front spoiler lips and the side sills are also available in a contrasting color. The new Audi A1 Sportback can be ordered later this 2018 in both European and North American markets, with no news on the launch locally. Our eyes are peeled for this sporty hatchback, and will let you know more as we get any information.