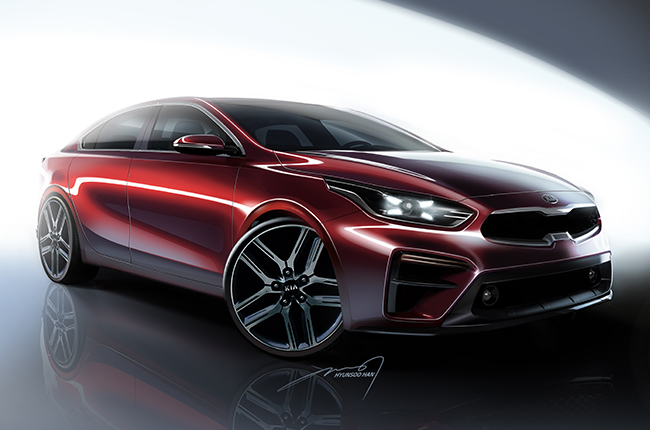 Kia wants to spice the anticipation up for the 2019 Forte sedan, scheduled to be displayed in Detroit on January 15. They did this by releasing early rendered photos of their latest work of art and we’re giving it a thumbs up.

The 2019 Forte sedan is the third-generation model of the compact car and is obviously edgier than the outgoing model. Everything is better – well, based on the renderings. We're talking about those hood creases and the headlamps' new shape, which are far more appropriate if Kia wants to go up against its compact sedan rivals. Add to this the huge side air vents and new tiger nose grille, the car is sporty as needed be. Turn the car 180 degrees and you'll see more changes on the rear, specifically a new bumper design. It has triangular vents on the sides, which we really like because it gives the car some sexy back. Even more, there is this distinct horizontal strip connecting the taillights that gives it some width in a visual sense. Inside, there’s a neat layout of the cockpit including the dashboard, steering wheel, and its entertainment system. The steering has a more modernized 3-spoke design, while the multimedia screen is gigantic. What we like the most is the simplicity of the dashboard; goodbye confusing dials and buttons. Lastly, the dash evidently shows the same aeronautically-inspired, spoked circular vents found on the Stinger. This is, unfortunately, as far as the rendering goes – roughly 60% of the cabin is missing. But, hey, we're only 3 days away from the official debut so it probably won't hurt if we wait a bit more. One thing we'd like to say to Kia, though: we hope the real thing is as flashy as the one pictured above. Thanks in advance.